Migrant children housed by the U.S. government at a makeshift shelter inside an Army base in the Texas desert suffered distress and panic attacks last year because officials lacked the resources and training to release them in a timely and safe fashion, an internal investigation released Tuesday found.

Inexperienced and untrained federal employees and contractors assigned to a child migrant housing site inside Fort Bliss were ill-equipped to place thousands of unaccompanied Central American children with family members in the U.S., prolonging their stay at the Army base, the Department of Health and Human Services (HHS) Office of Inspector General concluded after a year-long review.

Due to the large caseloads, staffing shortages, high rates of turnover and the inexperience of workers, hundreds of unaccompanied children housed at the HHS tent camp in Fort Bliss, which had the capacity to hold up to 10,000 teenage migrant boys and girls last year, went as long as two months without seeing a case manager.

"This created a situation where some children waited weeks between updates from their case managers, which staff at the facility reported as causing many children to experience distress, anxiety, and in some cases, panic attacks," the Office of Inspector General said in its 58-page report. 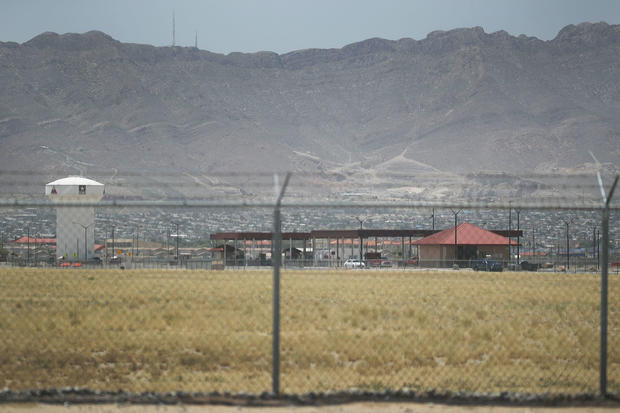 A Fort Bliss worker told investigators they witnessed a distraught migrant girl cut herself in front of other children after learning that case managers had not spoken to her mother about her release. The girl, the report said, was restrained by security guards and transported to a psychiatric facility.

"They had a sense that they had been forgotten," one Fort Bliss youth care worker told investigators.

Beyond causing "unnecessary delays" in migrant children's releases, the deficient case management undermined efforts to ensure the minors were not placed with adults who could harm them, according to the report, which relied on interviews with 66 Fort Bliss workers, a review of documents and a visit to the facility.

"In some cases, release recommendations made by these inexperienced case managers reportedly failed to consider children's significant history of abuse and neglect or whether sex offenders resided in the potential sponsor's household," the report said.

The inspector general's findings corroborate a series of CBS News reports last year that detailed the deteriorating mental health of unaccompanied minors housed at the Fort Bliss tent camp, the largest housing site the U.S. government has ever set up for migrant children.

HHS' Office of Refugee Resettlement is charged with housing unaccompanied children who lack legal status until they turn 18 or can be placed with a relative or sponsor in the U.S. But the agency's struggle in early 2021 to house migrant children amid record levels of border arrivals and pandemic-related capacity limits stranded thousands of unaccompanied minors in ill-suited Border Patrol facilities.

The Fort Bliss tent complex, which opened in March 2021, was one of more than a dozen "emergency intake sites" that HHS set up last year at military installations, convention centers and work camps to reduce overcrowding at Border Patrol detention facilities, which are not designed to hold minors.

While they alleviated dangerous overcrowding at Border Patrol facilities, the emergency intake sites highlighted the risks associated with quickly setting up makeshift housing structures for minors that did not have the same standards or services as traditional HHS shelters, which are licensed by the state child welfare authorities.

In May 2021, CBS News reported migrant children at Fort Bliss had limited access to showers, clean clothes, case managers and educational services. At the time, many children were spending weeks at the base, despite its temporary role. In interviews with lawyers, some of them described talk of self-harm and suicidal thoughts.

In June 2021, federal volunteers and workers at Fort Bliss told CBS News that migrant teens at the facility were constantly monitored for panic attacks, incidents of self-harm and escape attempts. Due to concerns about the children's mental health, officials banned pencils, pens, scissors, nail clippers, toothbrushes and other items that minors could use to harm themselves. Some children were placed on a suicide watch list.

After the details on the subpar living conditions and mental health challenges surfaced, HHS scrapped plans to house "tender age" minors there. It also dramatically downsized the number of children held at Fort Bliss and deployed case managers and mental health specialists to the site.

Despite calls for its closure, however, the Fort Bliss facility has remained operational for more than a year since its establishment. Earlier this year, HHS converted the site into a more permanent "influx care facility," which has higher standards of care and services than an emergency intake site.

In her response to the inspector general's findings, January Contreras, an HHS assistant secretary who oversees the unaccompanied children's program, conceded the "service delivery evolution" at Fort Bliss was "significant," saying investigators reviewed "one of the most challenging periods" in the program's history.

Contreras highlighted several efforts to improve conditions at Fort Bliss, including the expansion of case management, educational, medical, mental health and recreational services. In a statement to CBS News, HHS said there are now nearly 300 case managers assigned to migrant children at Fort Bliss, which was housing fewer than 600 teenagers on Monday.

"Currently, children spend, on average, only 13 days in care at the Influx Care Facility at Fort Bliss and meet with a case manager at least weekly. We have 126 mental health and behavioral counselors on site," HHS said.

A senior HHS official, who requested anonymity to discuss the department's policies, said the Fort Bliss tent camp was kept open and revamped, despite the subpar conditions and troubling allegations last year, because of the thousands of beds the facility offers.

"If we had closed (Fort Bliss) already, we would have seen a back-up at the border," the HHS official told CBS News. "We would have seen, again, hundreds, if not thousands, of kids in Customs and Border Protection (custody), without anywhere to go. And that's obviously unacceptable." 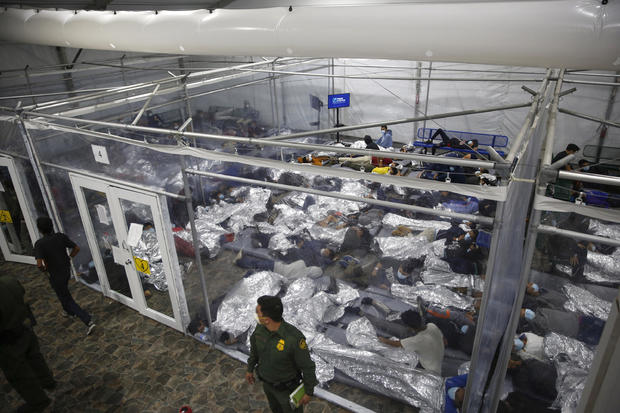 In this March 30, 2021, file photo, young minors lie inside a pod at the Donna Border Patrol holding facility, the main detention center for unaccompanied children in the Rio Grande Valley. Dario Lopez-Mills / AP

The Office of Inspector General also cited interviews with some HHS officials and Fort Bliss workers who reported facing retaliation or hearing about colleagues facing retaliation after raising concerns about conditions at the facility and the safety of children.

In addition to its findings related to Fort Bliss, the inspector general's report raised questions about HHS policies designed to expedite the release of some unaccompanied children in the department's care.

In March 2021, HHS issued a memo to speed up the release of migrant children sponsored by their parents or legal guardians by eliminating one third-party review and discontinuing background checks for non-sponsor adult household members. Another memo waived some background checks required for the release of children sponsored by close relatives, such as grandparents or older siblings.

HHS said it enacted these policies to ensure children did not needlessly languish in its care if they had sponsors ready to care for them, noting that parents and close relatives present lower safety risks than other sponsors. But the inspector general said the policies were developed "without adequate input" from child-welfare experts.

"Some ORR leaders and other staff reported concerns that these policies prioritized quick discharge over safety by eliminating critical safeguards from the sponsor screening process," Tuesday's report said, referring to the refugee office.

HHS agreed to all the recommendations made by the inspector general, which included instituting policies to hire qualified case managers, improve training for staff, create a policy-making process that solicits input from child-welfare experts and inform employees of their right to file whistleblower complaints.

HHS received 122,000 unaccompanied children in fiscal year 2021, an all-time high that shattered the previous record. While border arrivals of unaccompanied minors have remained high, HHS has reduced the length of time they spend in custody. As of Friday, the agency was housing more than 9,000 migrant children.

Camilo Montoya-Galvez is the immigration reporter at CBS News. Based in Washington, he covers immigration policy and politics.