There was an awful simplicity to the Mets’ sweep in Atlanta.

No cosmic bad luck, no pratfalls, no ill-timed injury — none of the “lol that’s so Mets” episodes that have conditioned the team’s fans to protect their hearts.

No, it was just a really good team losing to an even better team. Three times in a row. The Braves hit better. They pitched better. They ran the bases better, and they caught the ball. They tilted the season series to 10-9 Braves. That’s the justice of a 162-game season.

The NL East tragic number is 1 now. Only a massive swing in fortune — a Braves meltdown, let’s call it — will keep the Mets, masters of the division for the run of 156 games, from being bracketed into a best-of-three wild-card series starting Friday at Citi Field against the Padres (probably) or Phillies.

What was more galling about this weekend: The 4s and 5s the Mets allowed on the scoreboard or the 2s and 3s they put up? 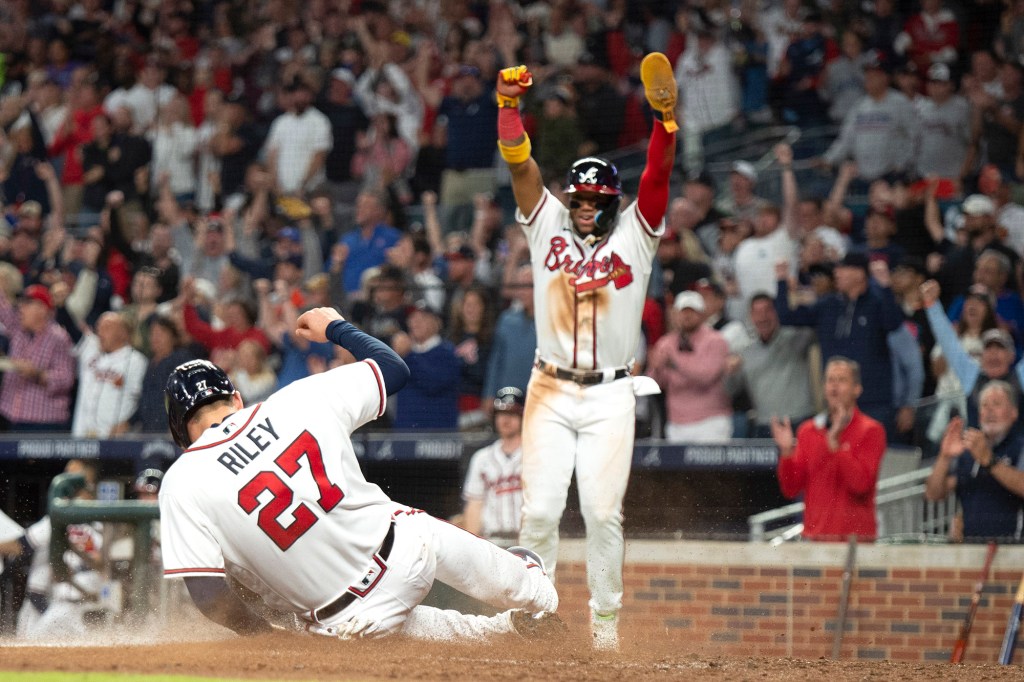 The front-line pitching is supposed to be what distinguishes the Mets even from their fellow top-five clubs in the sport. But Jacob deGrom got touched up. Max Scherzer got knocked around worse. Chris Bassitt was even worse than that.

Yet those seem like hiccups when you zoom out. The offense’s paper-cutting felt more emblematic. Dansby Swanson and Matt Olson hit a combined 22 home runs (OK, only six). Francisco Lindor and Pete Alonso had none. The basketball aphorism about teams without shooting suffering from a “math problem” — a 2-point make is worth less than a 3-point make — seems to roughly apply. The Mets grind out at-bats, produce three well-struck singles and score one run. The Braves answer with a bloop and a blast; that’s two runs. The Mets went 9-for-41 (all singles) in the series with runners on base, including 3-for-18 on Sunday night.

OK, but how much did the sweep really change for the Mets?

On Friday morning, they had to win 11 postseason games for the trophy. Today, they have to win 13. 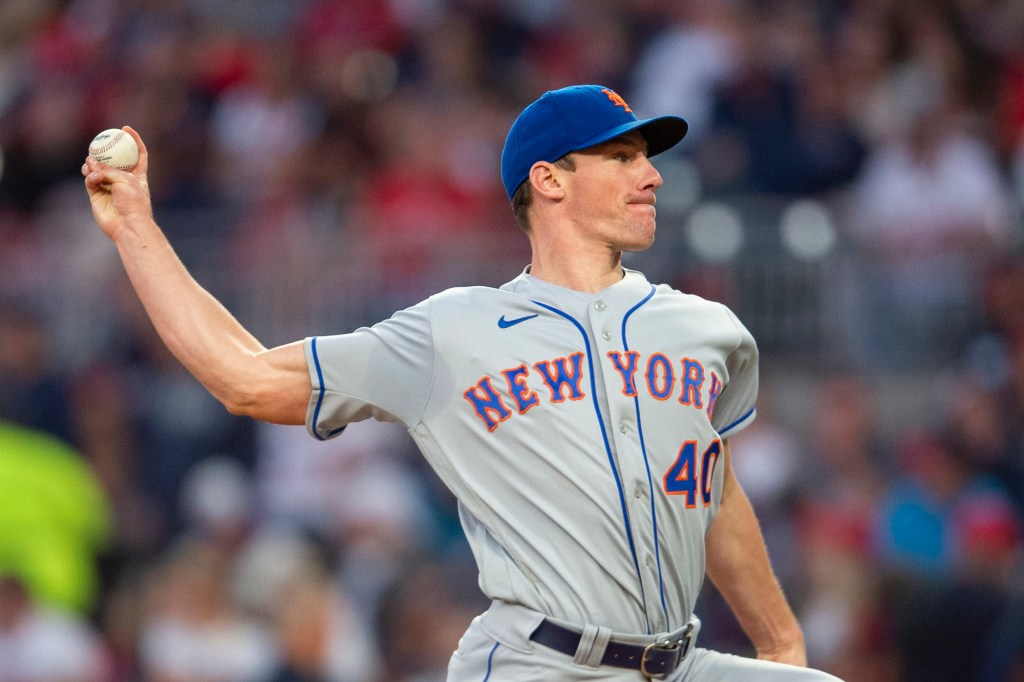 On Friday, they could have looked forward to setting up the rotation for the Division Series, making sure they had deGrom or Scherzer to pitch Game 1 and a potential Game 5 on regular rest. Today, they can’t expect more than one Division Series outing apiece (if they advance) from the co-aces and would figure to have Bassitt, Carlos Carrasco or Taijuan Walker in the Games-1-and-5 turn.

If you’re of the championship-or-bust mentality, sure, that makes the coming week(s) more difficult. But it was always going to be difficult.

Three losses in Atlanta don’t erase the unexpected delights of the past six months, the 98 wins (and counting), the trumpeting of an emerging contender.

The more painful re-orienting is this: For now, that’s all the Mets are, a contender, still looking up at the champs.

The sweep’s back pages 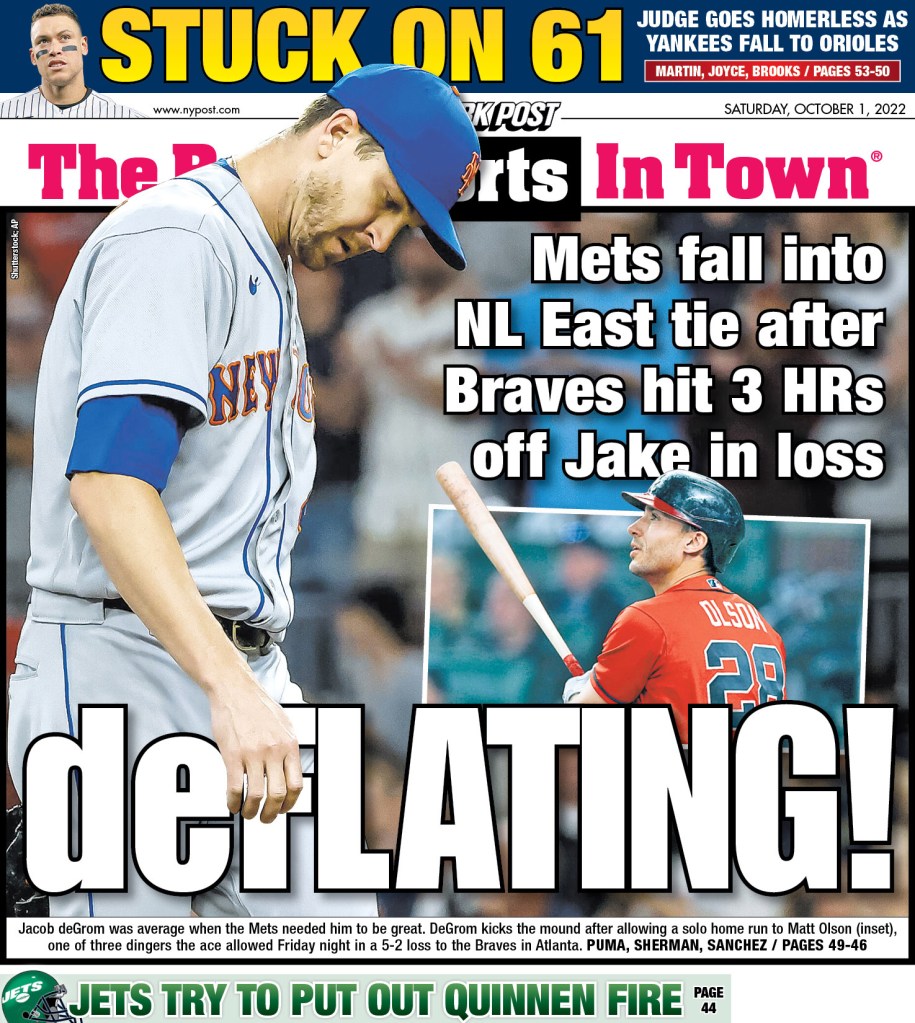 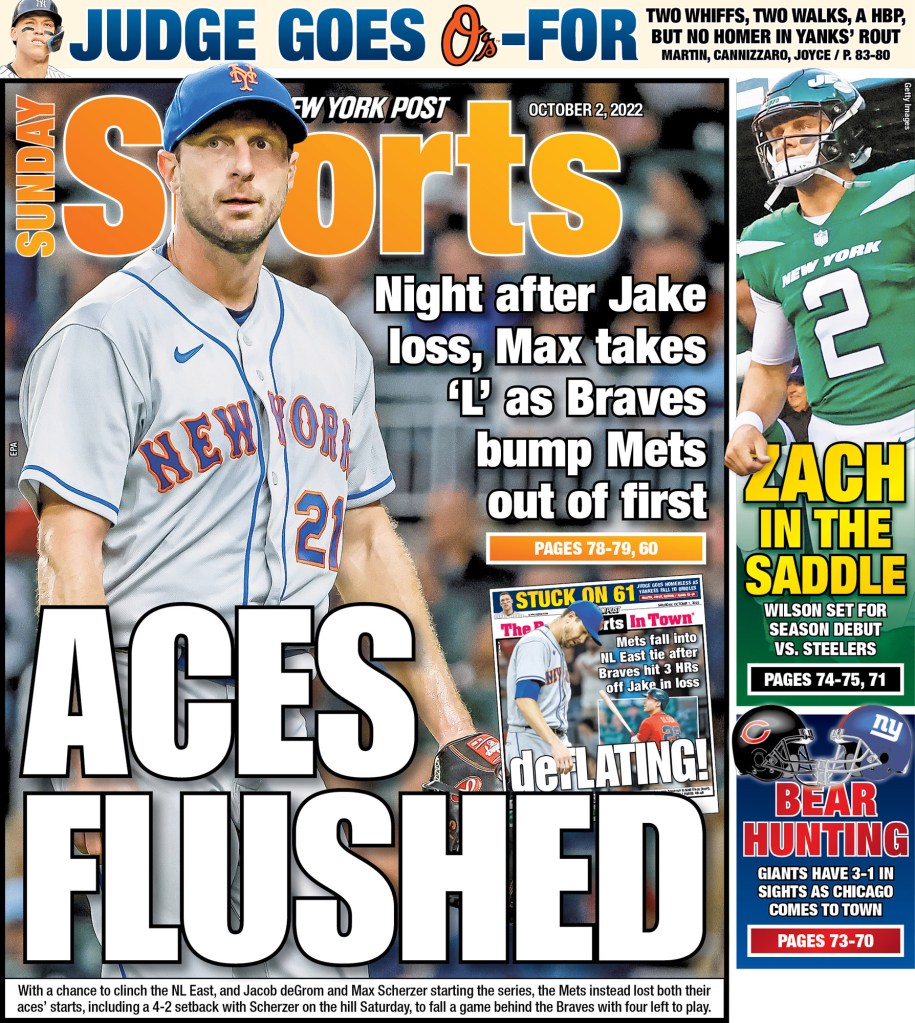 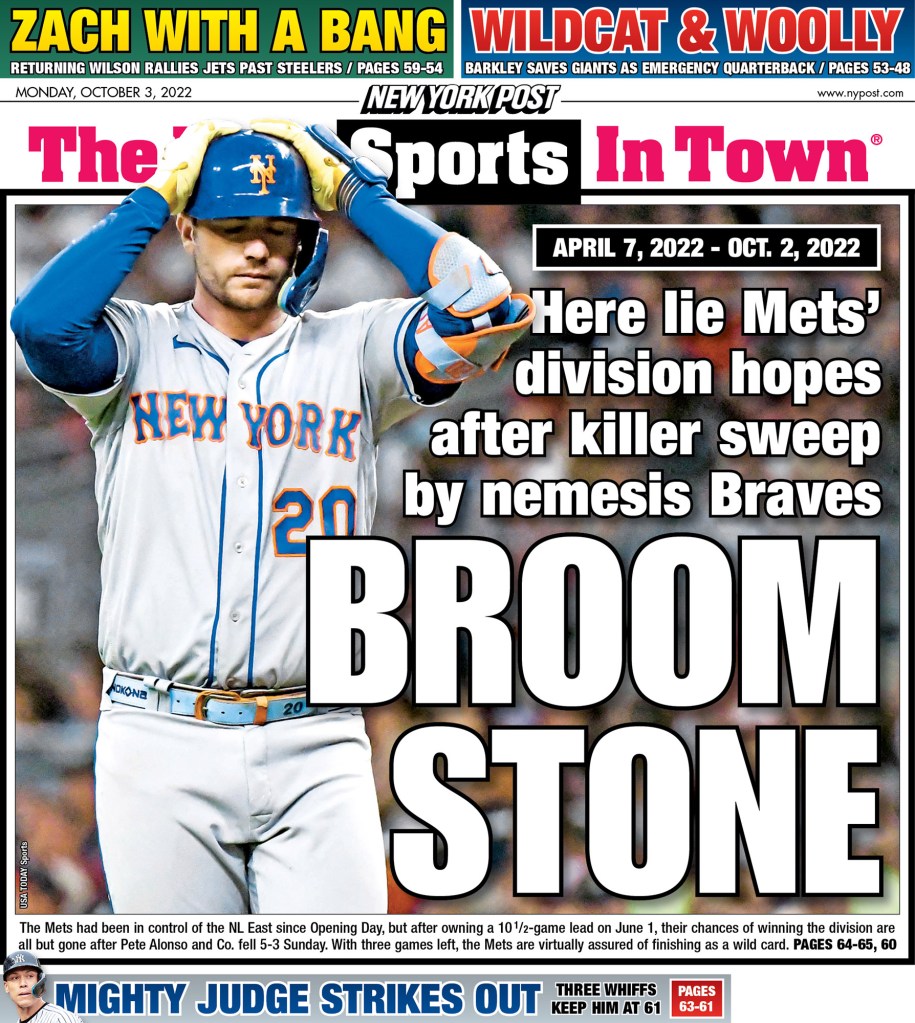 The time for thinking playoffs, for schedule parsing and scoreboard watching, will come. Or, more likely, it won’t.

FiveThirtyEight, for a bloodless look at NFL postseason probabilities, projects the 3-1 Giants with a 35 percent chance to reach the playoffs. The Jets are at 8 percent.

For now, it still feels as if the No. 1 item on both teams’ agendas is answering the most important question in the NFL: How good is my quarterback? Or, put another way: Do you feel better about your team’s QB waking up on Monday morning than you did before kickoff on Sunday?

For the Jets, the answer has to be yes. Zach Wilson, in his first start of the season after missing the first three games due to a right knee injury, didn’t play particularly well. Except when he needed to make a play. Then he was great. 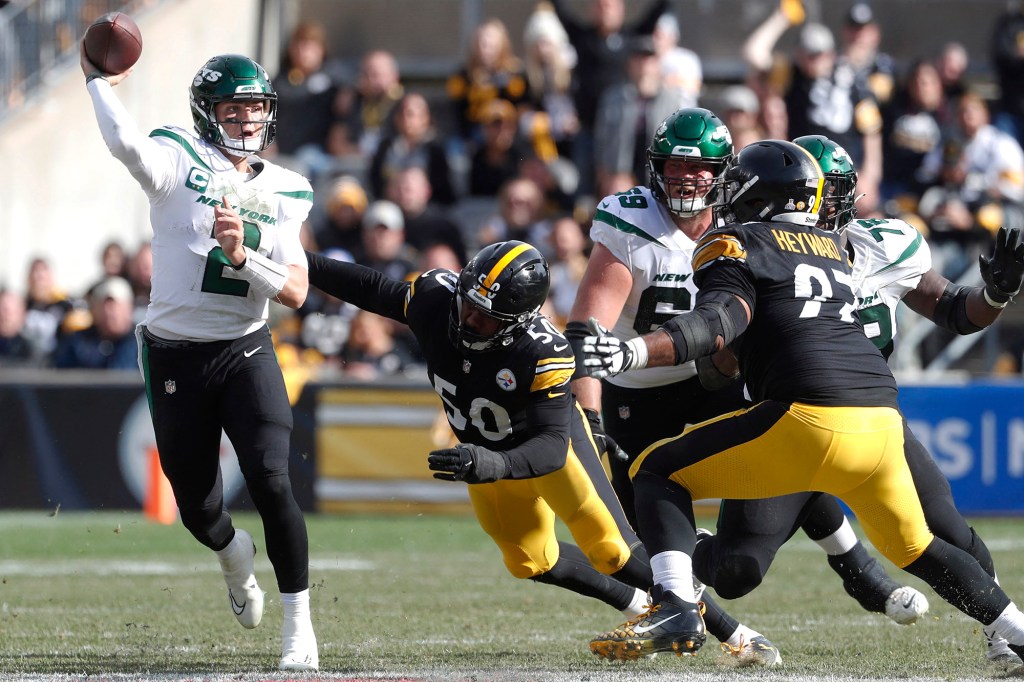 all Wilson did was lead touchdown drives of 11 plays and 81 yards and 10 plays and 65 yards. He put together , going 10-of-12 for 128 yards and a touchdown. And here’s how Wilson performed on the biggest, gotta-have-it plays of the come-from-behind 24-20 win in Pittsburgh: 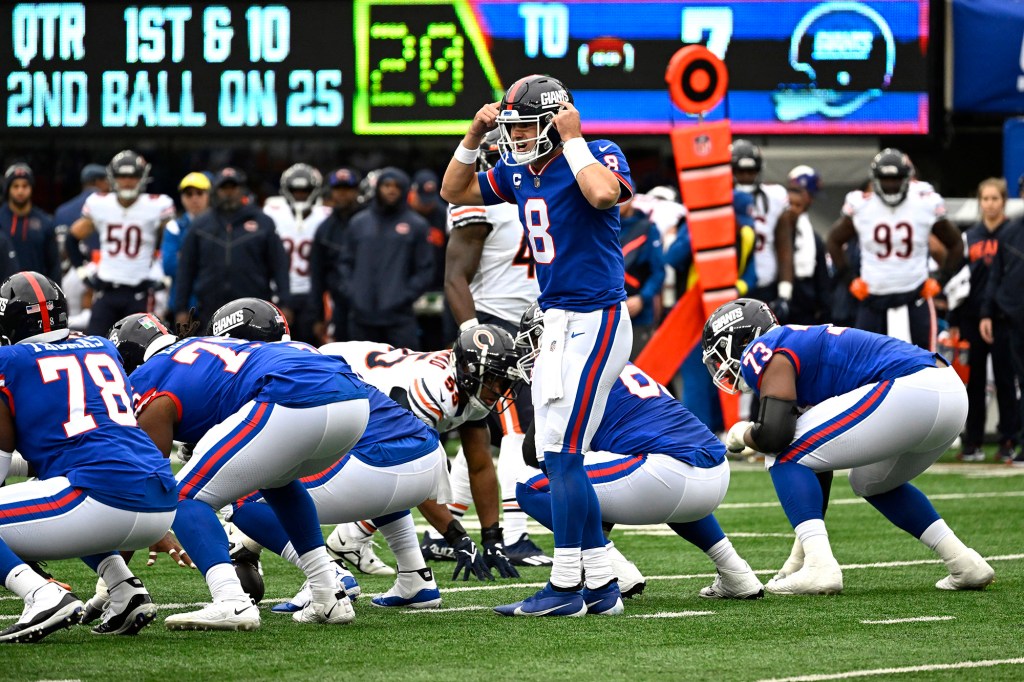 The answer for the Giants and Giants fans, as it often seems to end up being in Daniel Jones’ four seasons as a pro, is pending the trainer’s timetable — whether he’ll miss time, and how much, due to the left ankle injury he sustained in the third quarter of an unsightly 20-12 victory over the Bears. Jones was OK (8-for-13, 71 yards, zero interceptions). He made plays with his legs (six carries, 68 yards, two touchdowns). He did a good job of getting out of Saquon Barkley’s way. That’s all status quo.

(If some version of “Ah, so the Giants did use the No. 2 overall draft pick on a franchise QB” occurred to you while watching Saquon run the Wildcat, you’re not alone.)

So the Giants are again in QB limbo as they begin preparing to face the Packers next Sunday in London. No. 2 Tyrod Taylor suffered a concussion while subbing for Jones, and as long as NFL folks are making concerned noises after the Tua Tagovailoa fiasco, Taylor won’t be back soon. If Jones has to sit out, that means it would be Davis Webb vs. Aaron Rodgers and it means vanishing precious opportunities for Jones to win the 2023 job. But hey, at least the Giants are sitting on the No. 24 draft pick.

Bummers in The Bronx

Let’s face it: The Yankees played exhibition games this weekend. And the main exhibit is stuck on 61 home runs.

An odd energy suffused the series against the Orioles. The Yankees, assured of a first-round playoff bye, won one of three and continued to pass time until the Division Series. But the Yankee Stadium customers went home … disappointed? unhappy? outright agitated? … as Aaron Judge failed to break the American League single-season home run record with No. 62, which is what they showed up to see. 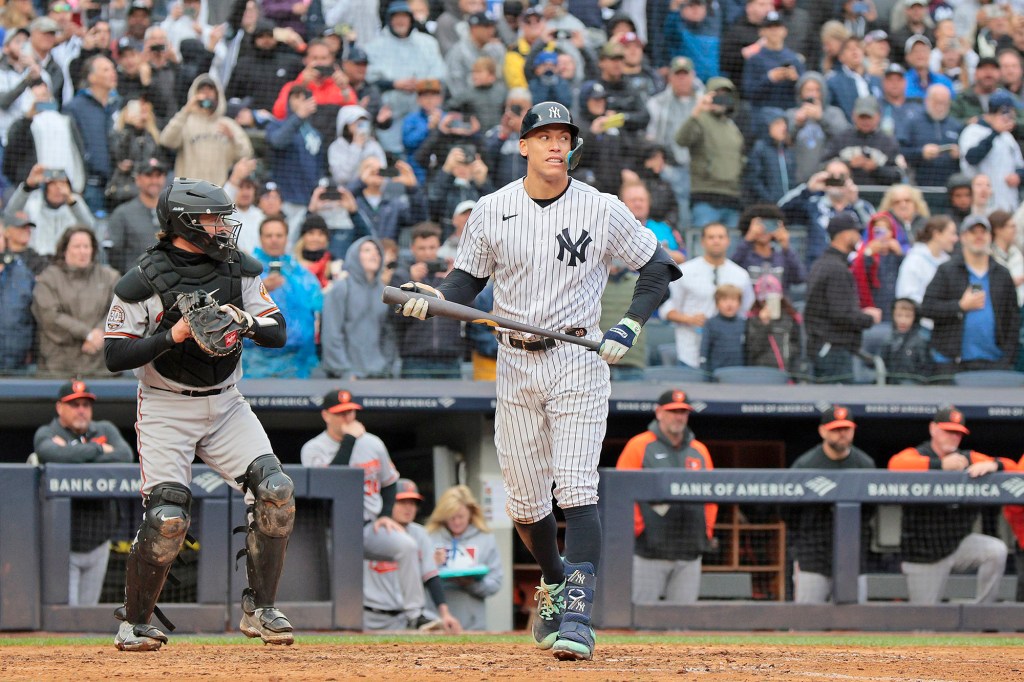 Judge went 1-for-7 with five walks and a hit by pitch; all six outs were strikeouts. You’re now allowed to say Judge — with one home run in his past 49 plate appearances — isn’t hitting like his usual self.

“It would have been nice to do it at home here for the fans, but we’ve still got four more games,” Judge said of the season-ending road set against the Rangers that includes a Tuesday doubleheader.

In any exhibition game (these chilly, rainy affairs were more Pumpkin Spice League than Grapefruit League), you just want to come away from it healthy, and the Yankees didn’t manage that either.

Zack Britton’s comeback from Tommy John surgery brutally sputtered to a halt; he was placed on the IL due to left shoulder fatigue and will miss the postseason. Clay Holmes needed a cortisone shot for a right shoulder strain. Ron Marinaccio, the make-good 27-year-old rookie from Toms River, exited mid-outing Sunday due to “right shin soreness” after experiencing a troubling loss of velocity. And Aroldis Chapman is a mess. On the plus side, valuable lefty bat Matt Carpenter (broken foot) continues to eye a return in time for the ALDS.

Some things can stay gold 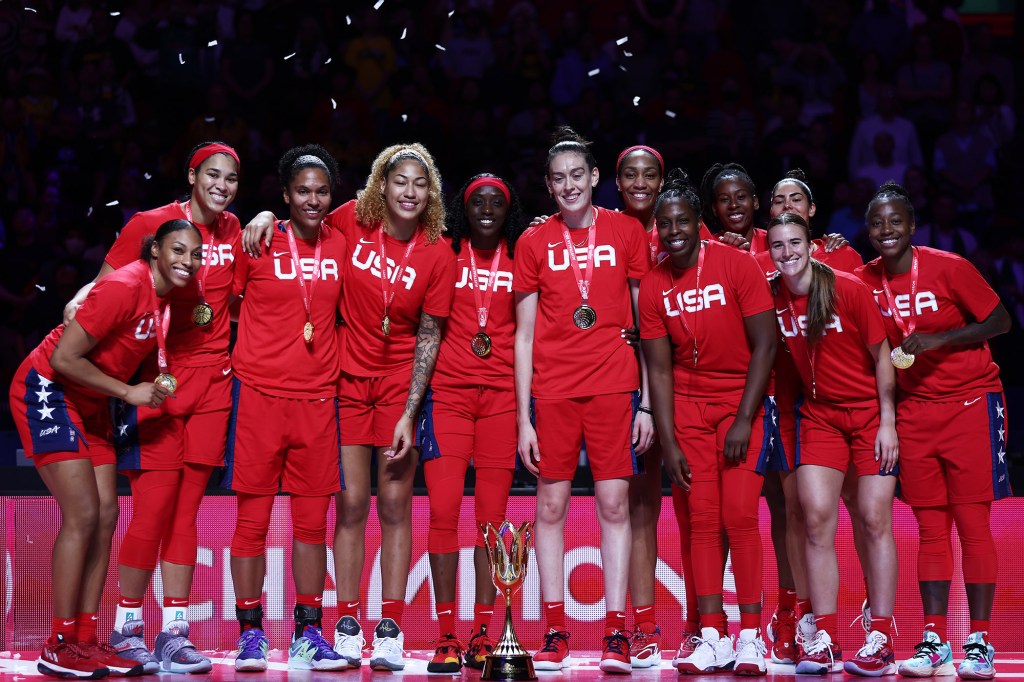 While you were literally sleeping or just sleeping on the best sports program we got, the United States women’s basketball team won the FIBA Women’s World Cup early Saturday morning in Sydney. This, despite turning over more than half the roster from the team that won the Olympics in Tokyo last year.

The U.S. beat China, 83-61, for the largest-ever margin in the tournament’s gold-medal game, and has dropped just one game in a major international competition (Olympics or World Cup) since 1994, per ESPN.

A’ja Wilson now has won the WNBA title, a WNBA MVP (and Defensive Player of the Year), a World Cup gold medal and tournament MVP … in the past few weeks. She indulged at a parade in Las Vegas on a Tuesday and dropped 20 and 8 against the best international competition in the world in Australia three days later. Hard to top it.

Six members of the New York Liberty won medals: Sabrina Ionescu and Betnijah Laney claimed gold with the U.S., center Han Xu won a silver medal for Team China and coach Sandy Brondello led an Australian team including guards Sami Whitcomb and Rebecca Allen to bronze. And that number may yet grow to seven: U.S. captain Breanna Stewart, an unrestricted WNBA free agent, has been linked to the Liberty.

• Tyler Herro got a four-year, $130M extension ($120M guaranteed) from the Heat. The RJ Barrett deal looks better every day.

• White Sox Tony La Russa is expected to retire. Because of his health, not because he missed the playoffs, of course not.

• RIP Marvin Powell and Jim Sweeney. Pillars of the Jets.

• Fishing cheating scandal? After this and poker and chess, next you’re gonna tell me there’s cheating in horse racing.

• Another outrageous hat trick for Erling Haaland. Nobody better in soccer right now.

• Congrats to LAFC (MLS) and OL Reign (NWSL) for clinching the Supporters’ Shields in the U.S. soccer leagues.