Medical experts are sounding off about a dangerous action taken by parents that can result in the death of a baby.

Co-sleeping, or sharing a bed with an infant, is one cause of sudden unexpected infant deaths (SUID).

In 2020, 905 babies died in America due to “accidental suffocation and strangulation in bed,” according to the Centers for Disease Control and Prevention (CDC).

Roughly 3,400 infants (younger than age one) die in this country suddenly and unexpectedly each year.

“There is no immediately obvious cause,” the CDC reports on its data and statistics page for SUID and sudden infant death syndrome (SIDS).

This month, Brook Hunter, a 23-year-old mother from Cincinnati, Ohio, was indicted for Involuntary manslaughter and child endangering after a second child of hers was killed due to co-sleeping, according to Amy Clausing, assistant prosecutor of the Hamilton County Prosecutor’s Office.

“At the time of the first incident, Hunter was advised of the dangers of co-sleeping,” Clausing added. “Because of the prior incident, the Hamilton County Coroner’s Office ruled the second child’s death a homicide.”

If convicted, Hunter faces a maximum possible sentence of 11 years in prison. The warrant is still pending for Hunter’s arrest; there are no pending court dates as of now, according to Clausing.

Fox News Digital reached out to the Cincinnati Police Department for comment. The department had answered the call for the incident involving Hunter’s second child, Clausing said.

The three commonly reported types of SUID include the following, according to the CDC:

—Accidental suffocation and strangulation in bed

“We are making every effort to help avoid this horrific situation,” said Dr. Steven Czinn, chief of pediatrics at the University of Maryland Medical Center in Baltimore, Maryland.

Czinn, the pediatrics chief, told Fox News Digital that he and his staff are required to educate parents about the dangers connected to co-sleeping, plus sleep safety — before patients are discharged from the hospital after labor and delivery.

“Everything we can do to raise awareness is important,” Czinn said.

“These are the most tragic of situations, to have a family deal with the death of the child in the first year of life. We have to continue to educate, to raise awareness,” he added. 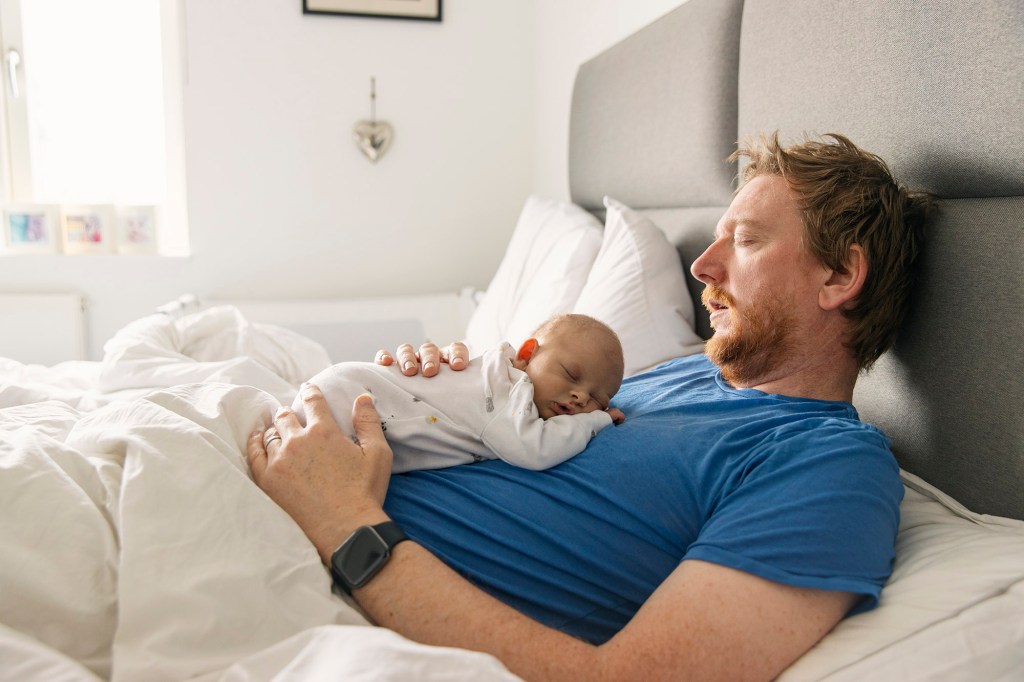 Co-sleeping, in the simplest of forms, is when a parent or caretaker sleeps in the same bed with an infant, Czinn said.

Co-sleeping can also be referred to as bed sharing or surface sharing, according to the American Academy of Pediatrics (AAP).

Czinn said the reason co-sleeping is considered dangerous is that infants primarily breathe through their noses. And their tiny noses can become blocked very easily.

“That’s why we ask parents not to put [certain items] in cribs anymore — soft toys, pillows blankets bedding,” he said.

“So if you’re co-sleeping and baby is right up against you, there is the potential that baby will be in the position where they’ll have trouble breathing through their nose.”

In addition, babies lack the gross motor skills to roll from stomach to back or back to stomach (the CDC says this happens around 6 months of age) — so they’re unable to change positions and escape obstructions. 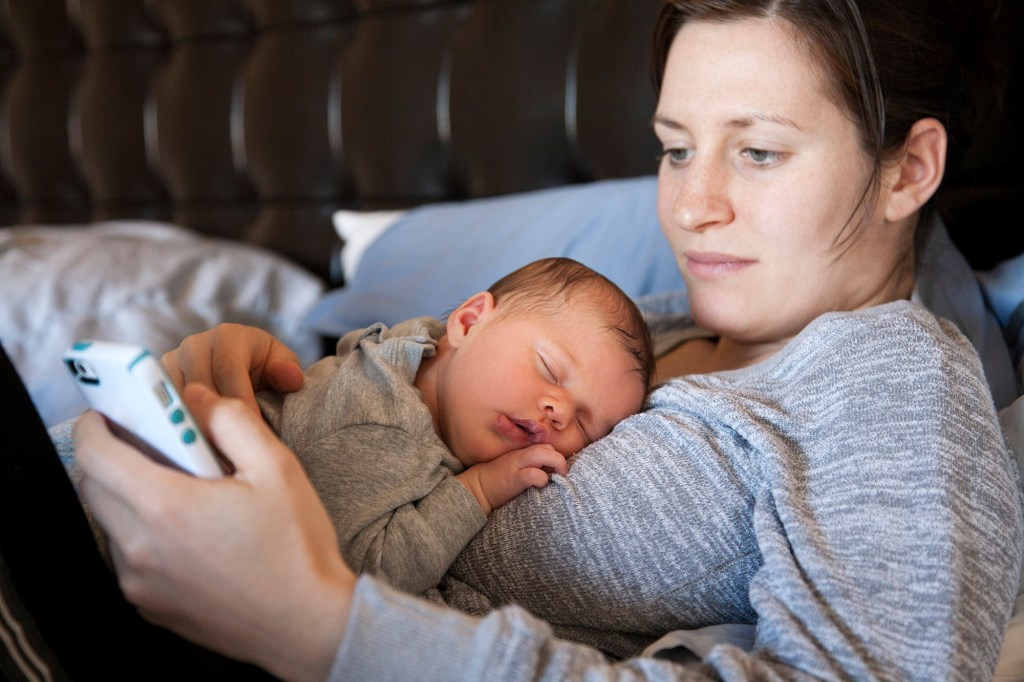 Why do parents co-sleep — and how can you keep your own baby safe?

Parents are often tired due to restless nights while taking care of a newborn, Czinn pointed out. If a parent considers co-sleeping with their baby, it may be because they believe it will help everyone catch up on much-needed sleep.

While some reports claim there are psychological benefits of co-sleeping, Czinn and the AAP advise against it.

“It’s more than a full-time job,” Czinn said of taking care of an infant.

“Again, you can go to classes, you can read books — but until that precious baby enters your house, you have no idea of how tired you’re going to be. So it makes perfect sense when you’d say, ‘I’m just going to lie down for a few minutes. I’m not going to fall asleep’ — but it happens.” 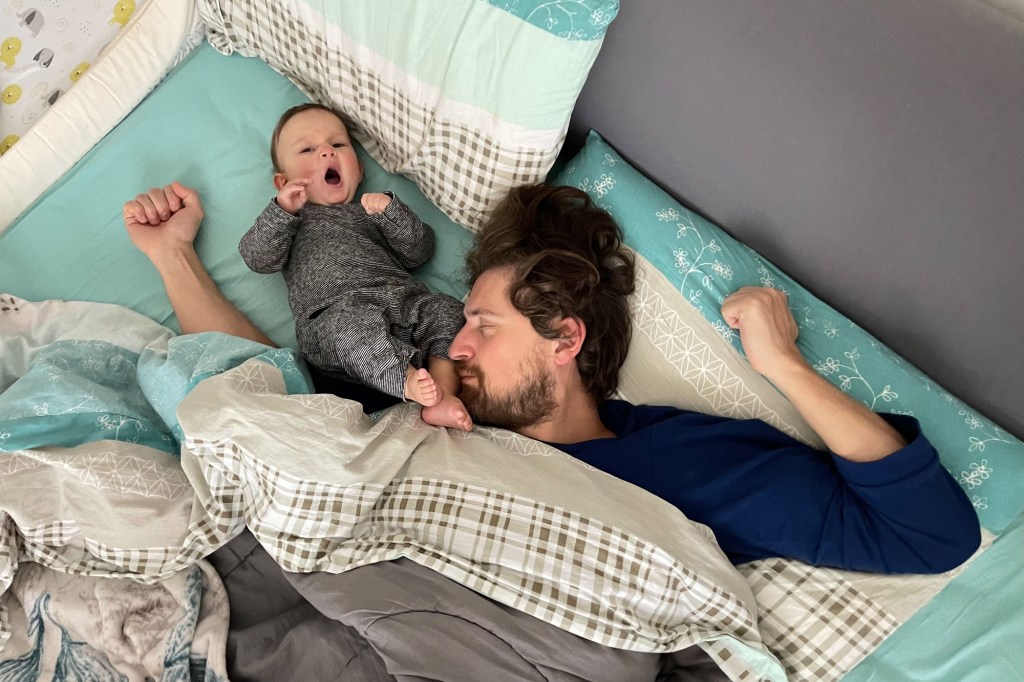 In its 2022 policy statement on sleep-related infant deaths, the AAP addresses that it does not recommend co-sleeping with a baby but “understands and respects that many parents choose to routinely bed-share for a variety of reasons.”

Those reasons may include “facilitation of breastfeeding, cultural preferences and belief that it is better and safer for their infant,” the organization stated.

“However, based on the evidence, we are unable to recommend bed sharing under any circumstances. Having the infant close by their bedside in a crib or bassinet will allow parents to feed, comfort and respond to their infant’s needs.”

Parents should look for “backup” such as a family member, friend, neighbor, spouse or partner to pitch in so that ideally, the parents can sneak in some rest time, Czinn advised.

He also stressed the importance of following the AAP’s guidelines for newborn sleep.

Here are the AAP’s safe sleep recommendations for the first year after birth:

Babies should be placed on their backs to sleep and in an empty crib or bassinet.

Parents should not use products for sleep that aren’t specifically marketed for sleep.

Keep blankets, pillows, stuffed toys, bumpers and other items out of the baby’s sleep space.

The AAP recommends that parents sleep in the same room — but not in the same bed as a baby — preferably for at least the first six months.

Avoid the use of commercial devices such as home cardiorespiratory monitors that claim to reduce the risk of SIDS or other sleep-related deaths.

If infants are swaddled, always place them on the back.

Weighted swaddles, weighted clothing or weighted objects on or near the baby are not safe and not recommended.

When an infant exhibits signs of attempting to roll (which usually occurs at 3 to 4 months or earlier), swaddling is no longer appropriate, as it could increase the risk of suffocation.

“We’ve made great strides in learning what keeps infants safe during sleep, but much work still needs to be done,” said Dr. Rachel Moon, professor of pediatrics at the University of Virginia School of Medicine and lead author of the policy statement.

“If we’ve learned anything, it’s that simple is best: Babies should always sleep in a crib or bassinet, on their back, without soft toys, pillows, blankets or other bedding,” she added.