Zaporizhzhia, Ukraine — We've been to the front lines, and to cities recently liberated from Russian occupation amid Ukraine's lightning counteroffensive. But you don't have to go that far to see the destruction Russia is capable of.

We visited the city of Zaporizhzhia, miles from any front-line combat, not long after it was hit with a barrage of Russian rockets on Thursday. The explosions sent emergency teams scrambling in a desperate search for those who survived the strike. At times, they found only those who had not.

We arrived to find firefighters dousing a mountain of twisted metal and debris. War crimes investigators were already looking through the rubble. Residents stood nearby, staring in disbelief.

Just a few hours after the rocket attack, it was no longer a rescue mission. The building in the middle of a main street in an upmarket part of Zaporizhzhia, several miles from any front line and at least 25 miles from Russian-held territory, was still smoldering.

The city of Zaporizhzhia has remained firmly under Ukrainian control, but it's the regional capital of one of the four areas Russian President Vladimir Putin illegally annexed just a few days ago. 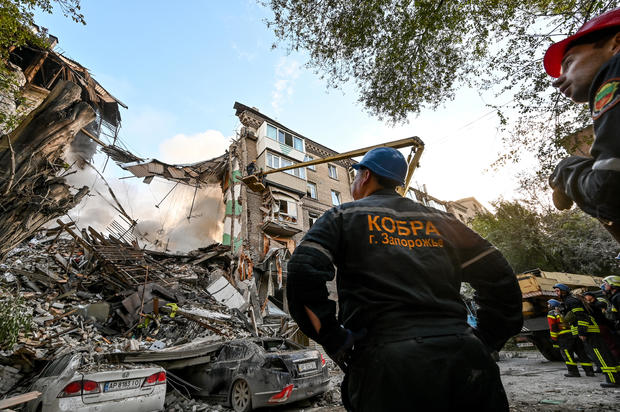 Resident Olena got a phone call from her 70-year-old mother at 5 a.m. on Thursday, saying she was trapped beneath the rubble.

"She has broken ribs, a lung contusion and broken leg," Olena told CBS News. "But she is alive."

Despite the ordeal, Olena seemed remarkably composed. Her real emotions, however, were simmering just underneath the calm veneer.

"We need help," she said, begging the wider world to "stop this."

Lying on the pavement outside were body bags containing three of 11 people known to have been killed by the Russian strike. With the search still going on Friday, it was possible more innocent victims of Putin's senseless war were yet to be found.

It was the second major missile attack on civilians in Zaporizhzhia in just a week. Last Friday we saw the aftermath of a strike on a civilian convoy that killed at least 30 people.

Ukrainian troops continue to smash through front lines in the south and the east, forcing the Russian invaders to retreat. Battlefield commanders tell us Russian forces are in "complete disarray."

One of the factors behind the recent success, according to a British intelligence report released on Friday, is the vast number of Russian tanks the Ukrainians have captured. The report estimates that at least 440 have been seized — amounting to roughly half of Ukraine's current tank fleet.

Infuriated by the losses, Putin has retaliated by launching long-range weapons into residential areas far from the fighting, spreading terror.

What Russia cannot capture, it seeks to destroy.

The fear, voiced bluntly on Thursday by President Biden, is that the Russian leader will feel so backed into a corner that he'll resort to even more lethal tactics in that strategy, including his nuclear arsenal.