A Beijing court ruled after a closed-door hearing that the evidence presented by Zhou Xiaoxuan was insufficient to prove sexual harassment, giving an initial judgment last September. supported.

Zhou, a former intern at China Central Television, a state-owned broadcaster, complained in 2014 that Zhu Jun, a CCTV host, forced him to kiss him by groping. She reported the incident to police in her 2014 and went public with it in 2018. Other women started speaking up. 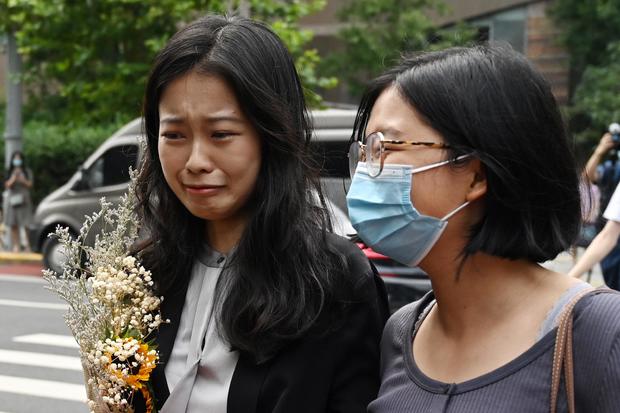 Zhou Xiaoxuan (left), also known as Xianzi, was a high-profile feminist figure during China's #MeToo movement. , walking with supporters in front. On September 14, 2021, she attended a hearing in a sexual harassment case against prominent TV host Zhu Jun in Beijing. GREG BAKER/AFP via Getty Images

, the #MeToo movement has largely been shut down. Activists found their online posts censored and faced pressure from authorities when they tried to protest.

On Wednesday, police blocked the sidewalk outside the courthouse building, citing his COVID-19 pandemic. Foreign media reporters, including AFP, were dragged away by police while filming the scene.

"The procedure for my case was really too difficult," she told AFP.

"Seeing what I've been through, I fear that other victims may be afraid to stand up for their rights."

But she added of her case, "Perhaps the next victim to appear in court will gain more credibility." Before returning to court, she told AFP her legal team would focus on accessing more evidence, including police records of interviews with her parents after she reported the incident. Previous trial and surveillance footage.

Zhou filed a lawsuit against Zhu to counter the lawsuit brought against Zhu. She asked for her public apology and her 50,000 yuan ($7,600) in damages. Zhu denies her charges.

In a video posted online one day before her hearing on Wednesday, Ms. Zhou said she has no regrets in pursuing her case.

"I sincerely hope that people will not have to suffer in the future," she said. She "hopefully makes it easier for the next victim to enter the legal process."