An Aaron and a No. 99 homered Friday night. Neither was hit by Aaron Judge (it was Hicks and Boston’s Alex Verdugo).

The Yankees and Red Sox combined for five homers Saturday. None were hit by Judge.

As easy as Judge has made hitting a homer look in 2022, it actually is not easy.

“A lot of things have to line up to go deep, even for the best of the best,” another Aaron, Boone, said after the Yankees beat the Red Sox 7-5.

Judge has made 18 plate appearances over four games without improving on 60 homers. Each time up generates a rising murmur of anticipation, chants of “M-V-P,” dead silence as the pitch is delivered and exhales that combine nervous energy and joyous anticipation each time he swings

History — trying to tie and exceed Roger Maris’ AL and Yankees record of 61 homers — has focused analysis (rightfully) and emotion on every pitch. No detail is too small (wind, shadows, are the Red Sox throwing it over the plate?), when something so big is being chased.

Yet in real time, the most pertinent issue whether the Yankees make history as a team is not about Judge, but that Boone is still weighing decisions 151 games into the season about his bullpen. The Yankees are still holding relief auditions with 11 games left. They are facing difficult choices. One could come as early as Sunday. 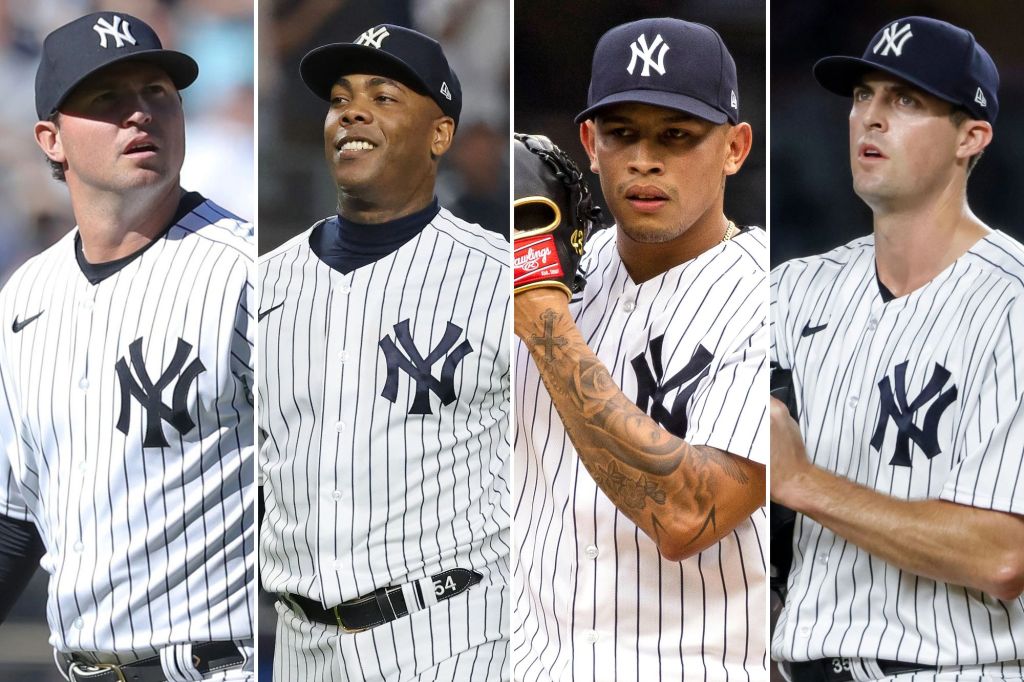 Miguel Castro completed his rehab assignment Friday with a shutout inning at Triple-A. The Yankees could decide to simply not bring the righty back if they do not see a postseason role for him, since he will be a free agent after the season and they do not intend to re-sign him. They could option Ron Marinaccio, Clarke Schmidt or Lou Trivino. But all are in play for postseason roles. So is Lucas Luetge, who in theory could be released.

Which brings us to Aroldis Chapman. The Yankees are at least contemplating whether to designate him for assignment. Essentially, the question is whether they believe they can straighten out his delivery and confidence in the waning days of the season and — even if there positives — whether they would trust him enough with his vacillating performances and control to put him on the postseason roster. Because, if not, he too is a free agent after the season and there are no plans for a reunion. 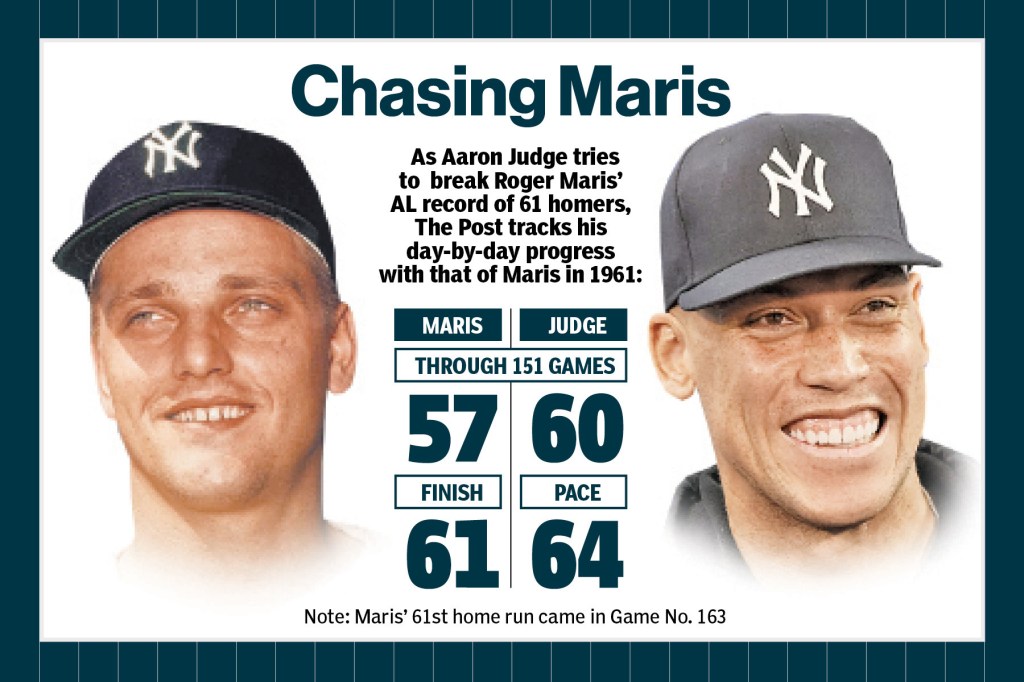 No Yankees official wanted to publicly address this. But it is among the buffet of choices. Dodgers manager Dave Roberts on Thursday announced he was removing Craig Kimbrel as closer at this late date without a clear plan on how he will now be used. Chapman, Kimbrel and Kenley Jansen have been the preeminent relievers of this era — Jansen is holding on to his Braves closing job, though there are calls to give it to Raisel Iglesias. That the Dodgers, the majors’ best team, and the defending champion Braves have bullpen uncertainty shows the Yankees are not alone.

Still, the Yankees have blown a lead from the sixth inning on in four of their last five games. (One of them was by Gerrit Cole, which raises another concern.) They have won each time. They have 16 walk-off wins, five more than any team and tied for the Yankees’ most ever. They have had at least 13 walk-off wins in six seasons and played in the World Series each time, winning five. They, however, also are tied for the MLB lead with 10 walk-off losses — their most since 1988. 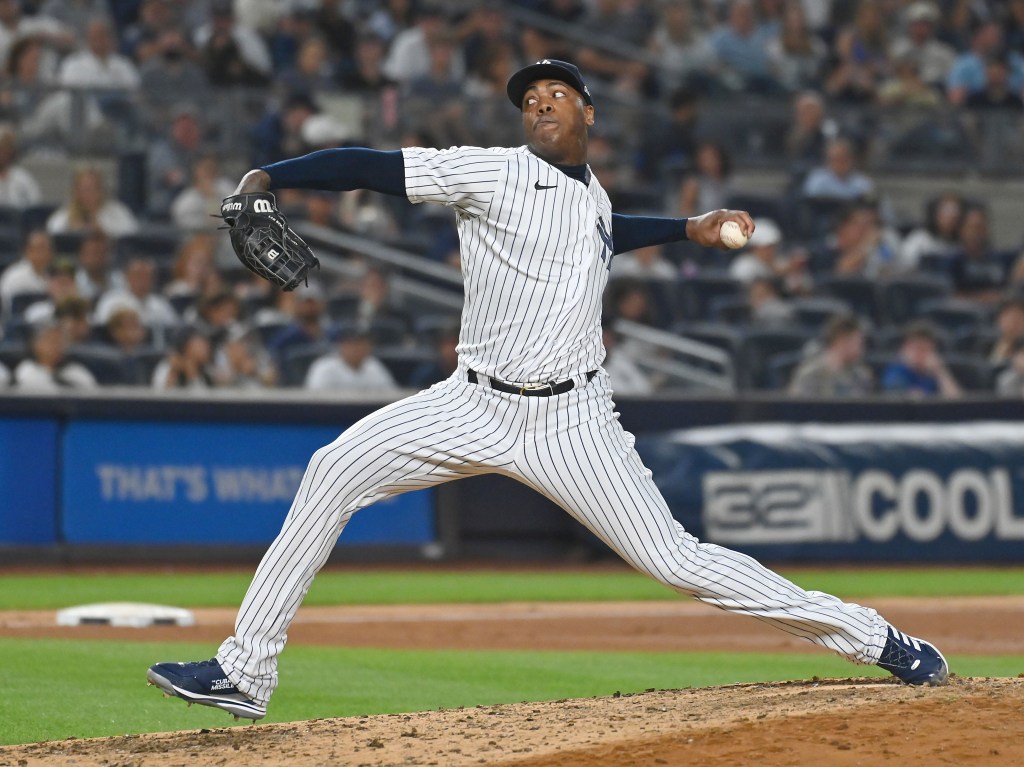 They are the Cardiac Yankees — and their pen is giving their fans heartache. As opposed to the recent past, with Chapman, Dellin Betances and Andrew Miller, this is not a strikeout pen (especially since the loss of Michael King). The 2014 ’16, ’17, ’18, ’19 and ’21 Yankees pens rank in the top 30 for highest strikeout percentage ever. This one (24.3 percent) is 12th in the majors in 2022.

This is a groundball group (No. 1 in the majors). The ball is going to be in play. The Yankees’ defense has been stellar to support this, but as pitching coach Matt Blake noted: “We don’t have a lot of pure strikeout guys. It’s a lot more like contact management. Ultimately, you’re trying to keep guys off base and you’re trying to keep them from slugging the ball and the ninth inning sometimes it can be trouble if the ball is put in play. Hopefully you’re not walking guys, too.”

Zack Britton, in his first outing since he had elbow surgery in September 2021y, walked three of five batters he faced Saturday. His velocity and movement were good. Can he gain enough control between now and the postseason to be a factor? Scott Effross, in his first outing off the IL, loaded the bases in a ninth, including a hit on 0-2 pitch, a hit by pitch and a walk. But he escaped.

Boone and Blake are envisioning a shakier Clay Holmes and Jonathan Loaisiga for the final six outs, with Effross and Wandy Peralta (due off the IL for the final series) as the main late-inning pieces. But nothing is set.

“It’s an opportunity for somebody to grab a more significant role moving forward,” Boone said.

There are 11 games left. Eleven games for Judge to get his historic homers and for the Yankees to try to pen a postseason script.

Oil prices jump 4% after Keystone Pipeline shut due to leak

Should cats be allowed on airplanes?

All about Emface, the treatment getting Jessica Simpson ‘camera-ready’

Stream It Or Skip It: ‘Harry & Meghan’ on Netflix, In Which The Royals Offer Unprecedented Access To And Surprising Revelations About Their Life

Iran carries out first execution by hanging over protests

WHO: COVID-19 Sets Back Global Malaria Efforts, Especially in Africa

I got ‘dress-coded’ over my ‘inappropriate’ top: ‘Disney doesn’t like backs’

Biden says Russia treating Paul Whelan case differently for 'illegitimate reasons': 'We are not giving up'

As more in North Carolina regain power, investigators probe domestic terrorism and threats against power infrastructure across the US

Christina Applegate reveals how she got MS diagnosis: It ‘sucked balls’

Who is the Russian arms dealer known as the 'Merchant of Death' that the U.S. exchanged for Brittney Griner?

Ilya Sorokin has gotten the Islanders this far, but here’s what they need to change to actually make a playoff run

Yellen to unveil first U.S. currency with her signature

How Eastern Conference parity has opened a door for the Knicks

WNBA star Brittney Griner released from Russian custody in a high-profile prisoner swap between the U.S. and Moscow

What we learned from Harry and Meghan's Netflix documentary

The Leaders Financing the Planet’s Future

China's Xi gets a warm welcome from MBS in Riyadh

Aaron Judge’s return is good for him, for the Yankees and for baseball. Too bad for everyone else

Meghan, Harry give glimpse into ex-royal life with never-before-seen photos