PITTSBURGH — This will be remembered, as long as it does not prove to be an aberration, as The Day Zach Wilson Grew Up before our eyes.

Because with the game on the line, The Kid got back up off the canvas and showed he is a cold-blooded fighter and set his huddle and organization and fan base afire with hope and belief at last in his 2022 debut.

It was Jets 24, Steelers 20 when it ended, only after Zach Wilson laughed in the face of danger and defeat to seize the moment the way Joe Douglas and Robert Saleh envisioned he would one day when they anointed him their franchise quarterback.

It was what he said and the X-rated way he effin’ said it that was the talk of the visiting locker room at a time when he was damn certain, with 3:34 remaining, that he was ready to grab the starring role in the movie “65 Yards To Glory.”

They all had a different memory of what exactly their quarterback had told them unflinchingly, but they all were smiling when they relayed it:

Laken Tomlinson: “He came in and said, ‘Hey, we’re gonna’ — excuse my language — ‘We’re gonna take this s–t over.’

“He came in and he commanded that huddle, and it was like a spark from him. He just knew that we were gonna win this game.

“I talked to him after the game too and I was like, ‘Dude, that’s some legendary stuff, man.’ We appreciate the hell out of you.” 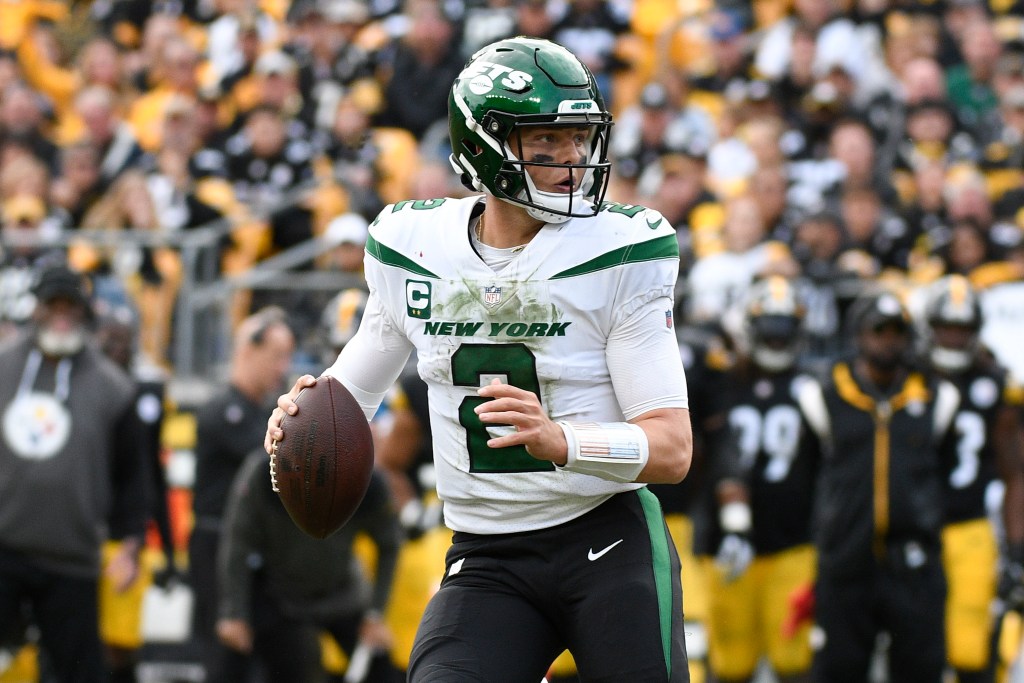 Wilson, who had actually caught a 2-yard TD pass from Braxton Berrios — after which he broke out the Griddy — and been intercepted twice, costing the Jets at least a field goal at the end of the first half, recalled it all in a much more subdued fashion when I asked him before the locker room opened if he had said anything in the huddle.

“Really it was just kind of the whole game, just trying to give those guys some juice,” he said, “Tell ’em to keep fighting, keep going.”

But he was no longer the overmatched rookie, even behind a makeshift offensive line that saw Alijah Vera-Tucker move to left tackle and Conor McDermott to right tackle after rookie Max Mitchell (knee) went down in the second quarter, even with Terrible Towels waving everywhere around Acrisure Stadium.

“It was cool, I feel like I have a little bit of a different mentality this year,” Wilson said. “It’s do my job, give it everything I got, and live to play with the result, and I think everybody did too. I felt like that was the first time as an offense, we didn’t feel stagnant, we didn’t feel timid. Everyone was playing fast, we were right in cue with what the calls were. So much fun playing in those situations.”

He expected to go down and score.

“Yeah, 100 percent. From the beginning I think there was no doubt in mind … I feel like as an offense you can just feel it.” 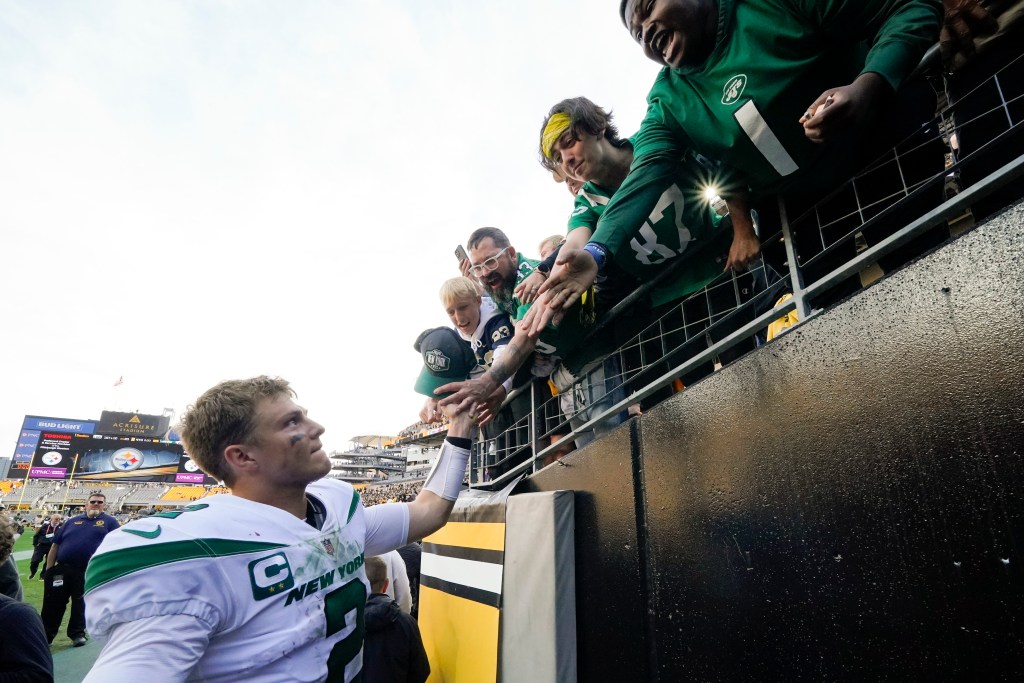 Wilson whipped a 15-yard completion to Davis and the momentum avalanche had begun.

“Everybody in the huddle thought that we were gonna go down there and score,” Tyler Conklin said.

Wilson found Conklin for 8 yards on third-and-6. He overcame first-and-20 and second-and-9 with a 17-yarder to Davis.

“He got big balls, man,” Hall said. “He never shut down, he never turned it off. You can tell he just believes in himself.” 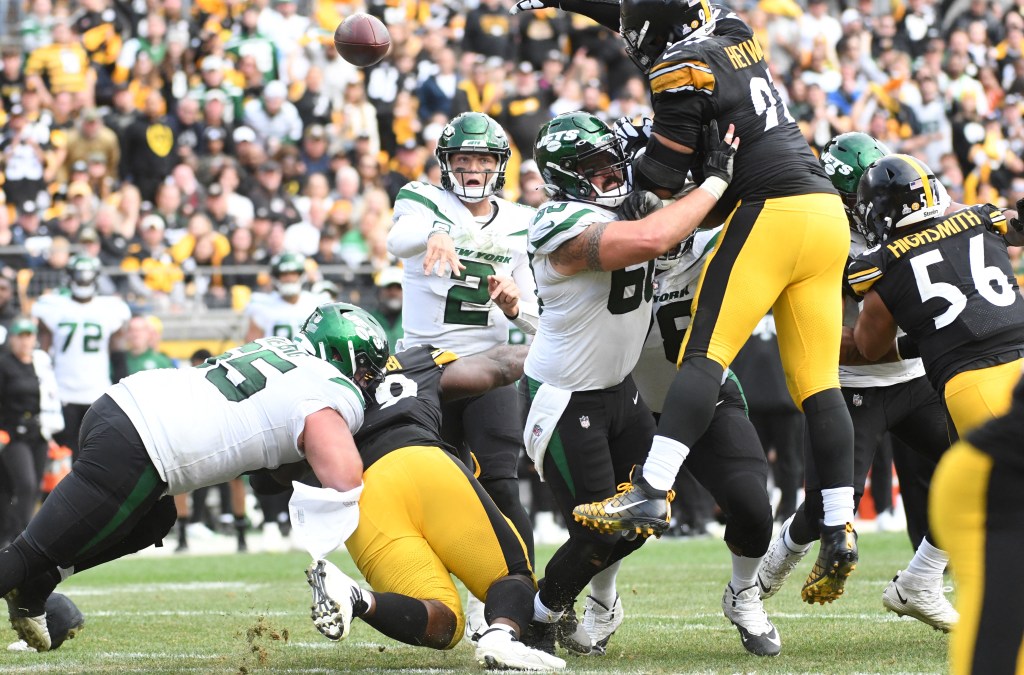 Four plays later, Hall was in the end zone.

“This is probably the most comfortable I’ve ever felt coming into a game,” Wilson said.

He looked his most comfortable only after Steelers fans had been singing “Ken-ny, Ken-ny” as rookie and local favorite QB Kenny Pickett was summoned to replace Mitch Trubisky in the second half. Wilson’s mobility on his surgically repaired right knee paid dividends keeping plays alive, but prior to hitting Garrett Wilson for 35 yards earlier in the fourth quarter, Zach Wilson had been 9-for-25 for 127 yards and those two picks. He capped an 81-yard drive that cut the deficit to 20-17 with 7:31 remaining with a 5-yard TD to Davis … after first-and-goal at the 1 had become first-and-goal at the 11 thanks to a pair of penalties. Then Michael Carter II gave him his last chance when he intercepted Pickett.

“Zach’s a playmaker, he’s got heart,” Connor McGovern said. “He wants to make the play that wins this game. He has the confidence now that you don’t quite have as a rookie.”

If you didn’t know any better, you’d swear The Kid had been keeping receipts.