With a growing population of over 700,000, a majority of the Solomon Islands rural populace depends on the informal sector to generate income.

The growing and selling of garden crops has enabled families to provide for their day-to-day needs.

But for women in Hautahe Village in East Are’are, Malaita Province, betel nut has enabled them to go an extra mile in providing for their families by building houses, paying for school fees, paying bride price and community contributions. 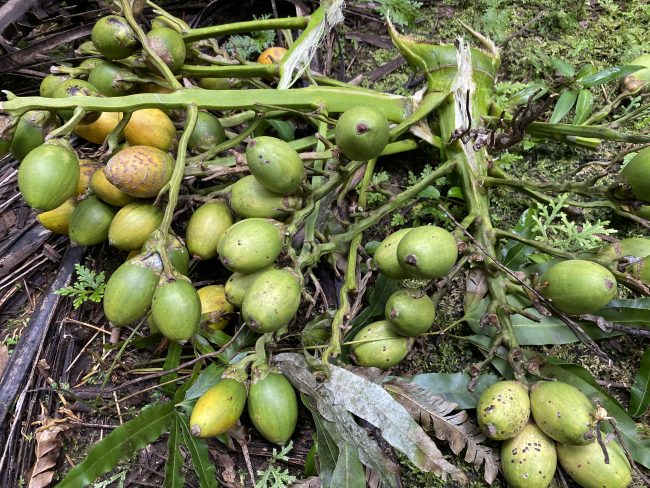 “For us, we have earned a lot from selling betel nuts and it has helped us to survive so that is why when we plant them, we look after them well,” Hautahe Betel nut farmer Mrs. Stella Haikeni said.

Growing over 5,000 to 8,000 betel nut trees in three of her plantations, Mrs. Haikeni said during a good harvest season, she can collect between 10-15  bags of betel nut to sell in Honiara. The 20kg bags are either sold wholesale to betel nut vendors in Honiara or can be sold in heaps or separately, depending on the market price in town.

She explained when there is a short supply of betel nut, they earn more money than usual which is a bonus for them as they get to plan out their family spending.

“When there is a shortage of betel nut, it forces the price to increase and during these times a 20KG of betel nut can cost up to $1000, so if you sell 10 bags you get $10,000 on that same day. If you were to sell on the tables in Honiara a single betel nut would cost $2 and up. When we get good money at such times, we look at our big family projects. For us we were able to pay for materials to finally build a permanent house after having to repair our leaf house frequently which was too much work.

“And when there is surplus of betel nuts at the markets, we still get good money, but we focus on other needs such as school fees, contributions for our community water supply maintenance and household goods.” 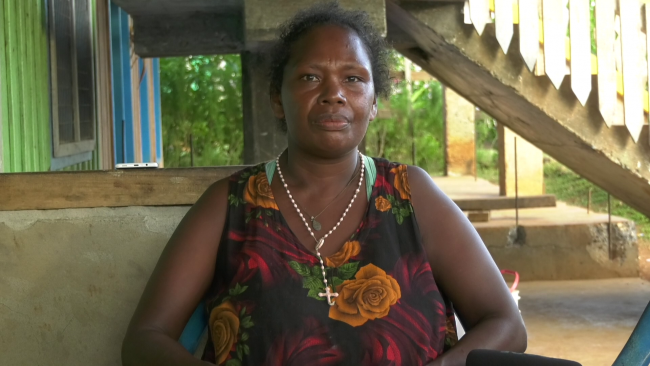 But with the imposed travel restrictions during the Covid-19 outbreak in the country, Mrs. Haikeni experienced significant loss to her plantations.

“We did not earn any money during those months of lockdown. The betel nuts were wasted and left to themselves as they have gone bad or are no longer suitable to sell. This has caused a halt to our family projects due to lack of finance.”

Another betel nut farmer Mrs. Tonasiana Nunuaru shared similar sentiments as she and her husband are entirely dependent on their betel nut plantation to provide for their family. 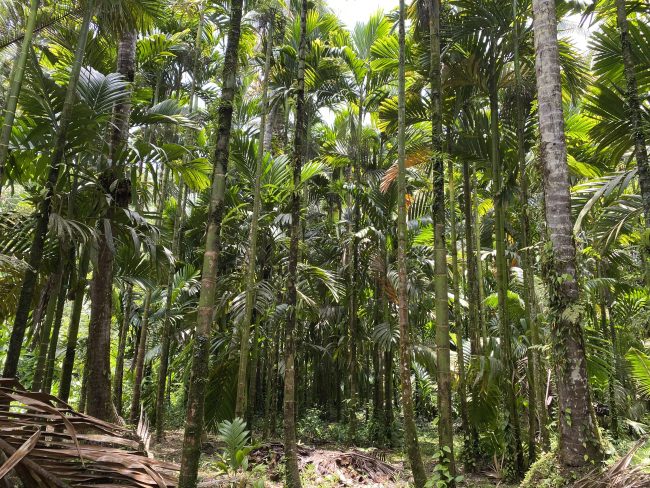 A betel nut farm in Hautahe

Her family has around 10 betel nut plantations which have gone to waste during the covid-19 pandemic.

“Most of us in the village do not have formal jobs so our only way of getting income to sustain us financially is through selling betel nut. The money earned goes towards building our houses, paying for school fees, contributing to family obligations such as bride price which is quite an expense, and contributions for our community and church.

“So, when restrictions were imposed during the pandemic, we were badly affected as we were not prepared for it and savings were disrupted,” she explained.

Although restrictions have been eased, Mrs. Nunuaru said the impact of Covid-19 is still affecting them through the spike in fuel prices. 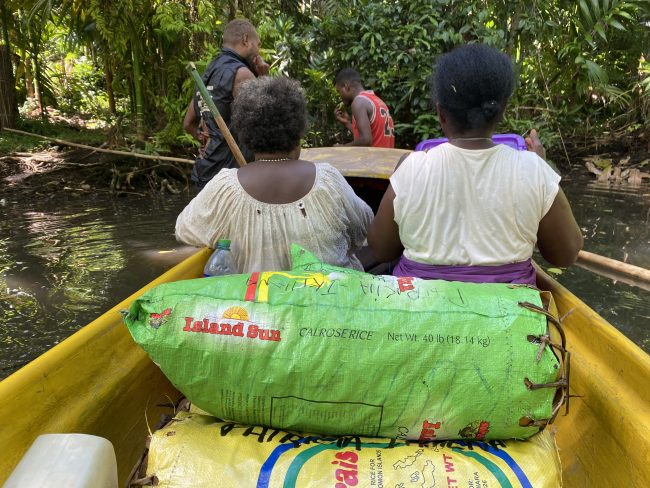 “Once the betel nut bag goes in the boat to transport to the nearest port we pay for freight, which is $20 for a bag. Then we also pay for the fuel which is around $130 a gallon, an increase which is caused by the pandemic on fuel.”

People in Hautahe need to travel to Auki, Malaita’s provincial centre to access bank services. Women in the village were fortunate to have a Savings Club where most of the women used to save their money. Earnings from betel nut are either saved at the Savings club where it can be withdrawn at certain times, or at their homes, where they are managed for household use.

Apart from betel nuts, people in Hautahe also farm kava and ginger. But women find that betel nut farming is more convenient for them.

“Compared to other crops that we grow for money, betel nut we just plant the tree and in its 5th year it bears fruit and does all year around unlike other crops which only bear fruit during its season. And we earn a lot of money from it,” Mrs. Haikeni said.

Meanwhile, Mrs. Nunuaru said compared to other crops, betel nut is an easy crop which does not require heavy work.

“The only hard work that goes into betel nut is brushing around it in its first few years. Other than that, when it grows taller there won’t be much weed to brush, and you just focus on harvesting. For ginger and kava, we would have to mount the soil, do the cuttings before planting and the money earned is only when there is a good harvest once or twice a year, and not all the time like betel nut,” she said. 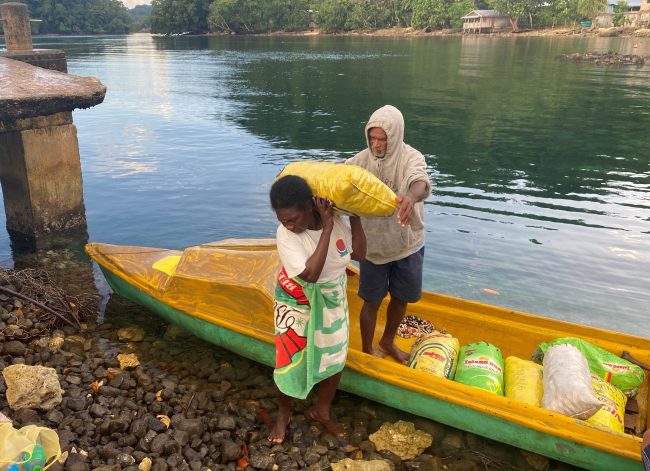 In countries such as Indonesia, betel nut is commercialized through export of its fruits. According to reports from Volza Grow Global, the top three exporters of betel nut are Indonesia, Netherlands and India, with Indonesia being the largest, accounting for 5,733 shipments.

For Solomon Islands, betel nut is mainly commercialised within the country from producer or farmer to the seller. Consumers buy betel nuts mainly to chew for pleasure.

With its large consumption rate in the country, it is used as an item to calculate the country’s Consumer Price Index (CPI).

Senior Statistician at the National Statistics Office, Ms. Anna Luvu says high expenditure on betel nut has seen its inclusion as an item for the CPI.

“The things we price are not chosen randomly but are based on our Household Income and Expenditure Survey (HIES) where we look at the spending pattern of urban centres. Through this we were able to see what people spend more on.

“And in the last HISE survey in 2012-13, we saw that betel nut is a big expenditure for households in urban areas. We have seen it as a volatile item as its price is not steady, so we have allocated a day to collect data on it which is every Tuesday.”

Ms. Luvu added with the information and data they have collected over the years on betel nuts, it is clear that betel nuts bring huge economic benefits to people’s livelihoods.

“Personally, I think policy makers and users of the data we provide should consider the economic benefits that betel nut is providing to livelihoods through its high expenditure. This shows that people are benefiting from it and should be considered.” 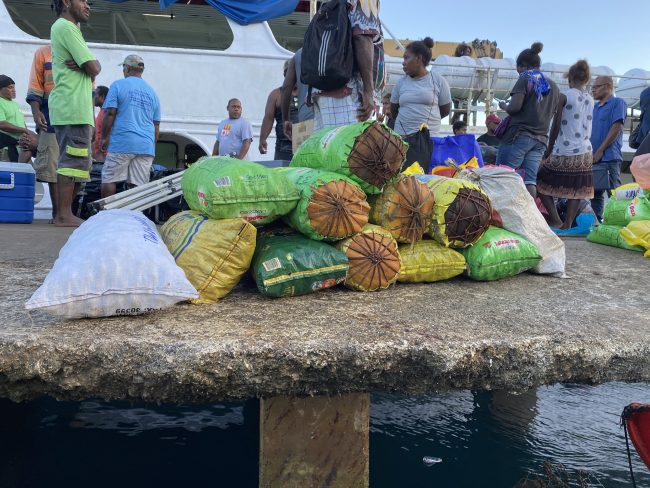 Harvested betel nuts ready to be transported to Honiara for selling

The Ministry of Commerce, Industry, Labor and Immigration also recognizes the betel nut industry in the country as one that develops livelihoods. Permanent Secretary to the Ministry, Mr. Riley Mesepitu says while wholesalers and families in and around Honiara depend on the sale of betel nut to earn cash income, those engaged in formal employment also resort to setting up small betel nut stalls to supplement their fortnightly incomes to meet daily needs.

“While there is no market assessment being conducted with the betel nut industry to uncover its real value, we can project that this industry is really helping many Solomon Islanders irrespective of whether you’re employed or unemployed.

People participate in it not only to stabilise cash income for families but also to meet intermediate household needs.”

Mr. Mesepitu also highlighted that the Ministry recognises the involvement of women in the industry.

“Men and women equally play an important role in the betel nut industry through their engagements in owning plantations and market distribution. But the latter is more predominant with women participation.” 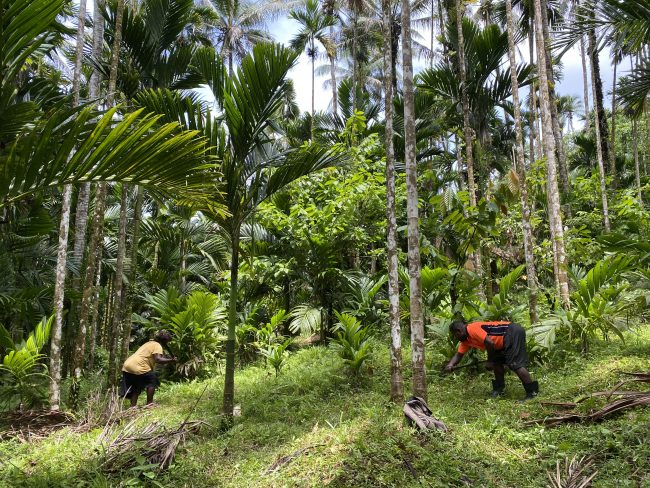 The Ministry of Commerce sees the market outlook for the export of betel nut regionally as depending on the market demand stemming from local Solomon Islanders overseas. It also notes that the biosecurity requirements from regional countries would likely undermine any possibility for export.

However, the Ministry anticipates a viable future for the betel nut industry as higher consumption rates tied to cultural practices and pleasure, will increase the earnings generated for key players in the industry.