induced climate change, have asked the International court of justice for an advisory

opinion on climate change rights. The campaign was led by the Pacific Islands Students Fighting Climate Change (PISFCC) who are attending the COP27 climate conference in Sharm El Sheikh, Egypt.

The PISFCC believed that the impacts of climate change posed a threat to basic human rights.

This is evident on those whose water are contaminated including loss of food and housing due to seal level rise and extreme weather.

Speaking during a side event at this year’s climate talks on ‘Strategic legal approaches to safeguard climate, nature and our future’, PISFCC member, Solomon Yeo lamented that the entire Pacific Region needs a solution which recognises climate change issues as a threat to human rights. 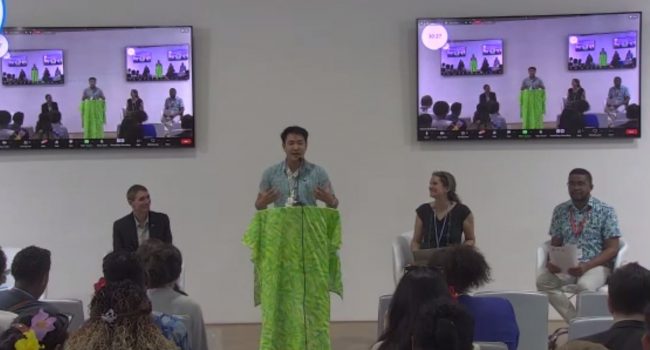 Solomon yeo speaking during the side event at COP27 on ‘Strategic legal approaches to safeguard climate, nature and our future’

“In Solomon Islands, there are women who are unable to conduct their basic household activities because their water supplies have been cut off and are being contaminated by sea level rise.

“Kiribati, there are people waiting in the outer islands for water supplies…desperately, they need to nourish themselves and perform their daily activities but they are still waiting for that ship that costs USD 70 to 60 thousand per trip.

“To the people of Tonga, some farmers often face hardship in their agricultural produce because of the many climate change impacts influencing them. The people of Vanuatu are being faced by the most serious category 5 cyclones year in, year out. To Fiji where the community has been relocated, as they look back to their past village, they were crying but also singing, remembering the land they were born on.’’

Mr Yeo added that in a world where people are suffering from the impacts of climate change, the ICJ should not be silent.

The Solomon Islands Indigenous People Human Rights Advocacy (SIIIPHRA) has supported the call for an advisory justice on climate change.

He said economic development should be brushed aside as the rights of those affected by climate change should be at the forefront.

“ Advisory justice should be the right process when dealing with climate change and its impacts on human rights,’’ Mr Noamasahu said.

At a virtual media briefing hosted by the Pacific Islands Forum Secretariat, Fiji’s Permanent Representative to the United Nations, New York, Dr Satyendra Prasad said human rights has been the center of discussions when negotiating the climate talks agendas.

He said government delegations and civil societies have been very powerful in bringing human rights issues to discussion.

As part of their campaign, PISFCC called on Pacific leaders to support Vanuatu in its campaign and negotiations in seeking an advisory opinion through ICJ on climate change.

It said negotiations in Vanuatu’s push for an advisory opinion should consider the maximum impact of climate change that all countries are drawing the redline on.

Another agenda that should be focused on is the protection of human rights.