Contrary to expectations, Torino was unable to stop Juventus’ progress in the Turin derby in the round 30 of Serie A. This continues to be a jubilant match of C. Ronaldo and his teammates.

Notably, in this match, C.Ronaldo made a superb free kick against Torino. This is the first free kick of the Portuguese "superstar" in the Juventus shirt (ie about 43 times).

C.Ronaldo’s goal helped Juventus win the game with a score of 4-1 against rivals in the city. With this result, her grandmother continued to lead the Serie A with 75 points, 7 points higher than the 2nd ranked Lazio but played more than 1 match.

Before Torino played not really determined, Juventus soon had the goal to open the score in the 3rd minute. Receiving the ball from Juan Cuadrado’s cross, Dybala calmly managed without any obstacle, before when easily scored the net goalkeeper Sirigu, opening the match. 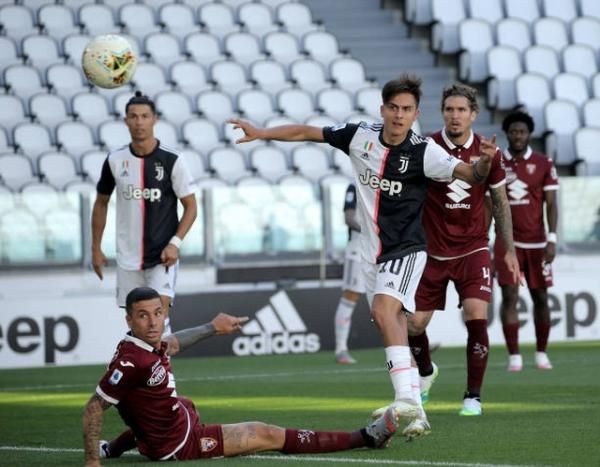 Torino is too weak to stop Juventus

By 29 minutes, the score was 2-0 for Juventus. C. Ronaldo was the one who launched the attack with a speed ball, before passing it to Juan Cuadrado. The Colombian easily removed the Torino defender and sho‌t decisively into the far corner.

The thought of the first half will close with a score of 2-0 in favor of Juventus, in the extra time, Torino had a goal to shorten the score. After consulting VAR technology, the referee decided to give Il Toro a penalty when the ball touched De Ligt’s hand in the penalty area. On the 11-meter mark, Belotti missed a shot, but he was there in time to play the ball, scoring for Torino.

At the beginning of the second half, Torino suddenly put the team up so strong that Juventus was really overwhelmed. However, with the outstanding moment of C. Ronaldo, Juventus made a difference. From a free kick at a distance of about 25 meters, CR7 made a very difficult shot. Sirigu goalkeeper had completely flown but could not stop. 3-1 for Juventus.

After suffering this goal, Torino’s spirit went down significantly. In the 87th minute, Torino’s replacement defender Djidji unexpectedly scored an own goal in a situation where he was under no pressure.

Juventus won the final with a score of 4-1 and continued to assert their dominance in Serie A.

Raheem sterling: Looking for tickets to Lisbon. From the 10th to the 24th. Retweet if you can help
Pep Guardiola: Gabriel is the best player of matches with Real Madrid
Three heroes of Lyon in the match with Juve – among them the defender, whom the fans drove in the fall
Manchester City and Lyon will meet in the 1/4 final of the Champions League on August 15 at Jose Alvalade
Photo of Pep and Zizou – just a gift for Showsport users
Ronaldo was eliminated so early from the Champions League for the first time in 10 years, although he tried very hard – in the playoffs for Juve, only he scores
Rudi Garcia: to Pass Juventus is a feat. The most pleasant defeat in my career
Source https://en.xaluan.com/modules.php?name=News&file=article&sid=2845301