Only Maltese citizens will get €100 COVID-19 vouchers

Only Maltese citizens who are on the General Elections Electoral Register will receive a €100 voucher to be spent at establishments impacted by COVID-19.

Non-Maltese residents anxiously waiting to receive their coronavirus voucher have been told they are not eligible for the free government gift.

A government spokesperson confirmed that the vouchers will be sent to the addresses listed on the general election register.

Earlier this month Prime Minister Robert Abela announced that everyone aged over 16 will receive the vouchers to spend at restaurants, shops and hotels to give a boost to the local economy.

Non-EU residents are not on any electoral register.

The issue was highlighted by an EU national who posted on Facebook group Expats Malta that she had been told by a budget helpline that only Maltese citizens are eligible. 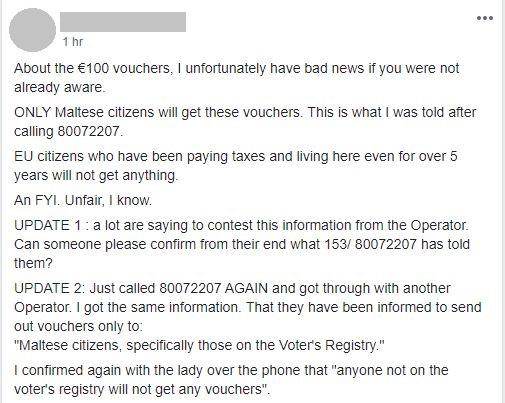 Her post was widely shared on social media and WhatsApp.

Expats have vented their frustration, some urging co-patriots to take up the issue with the EU.

When Times of Malta contacted the helpline 8007 2207, an automated message said every person aged 16 and up will receive the voucher. However, these will be sent on the address listed in the electoral register.

Click here to check whether you are listed in the registry.

Last week Tourism Minister Julia Farrugia Portelli said that 340,000 people will receive the vouchers, adding that €80 out of the total of €100 can be used in industries linked to tourism, while the remaining €20 can be used at other businesses forced to close down, such as retail outlets and hairdressers.

Slovenia has launched a similar initiative, whereby each adult citizen will be handed a €200 tourism voucher, with the aim of boosting the sector brought to a virtual halt during by the pandemic.

Giroud has scored 6 goals in his last 10 Premier League games – the same number as in 51 games before
Liverpool leads its graduates through life. You'll Never Walk Alone in action
Ararat-Armenia won the Armenian championship for the second season in a row
Barcelona is ready to let Umtiti go. Lazio, Napoli, Roma and Torino are Interested in him
Dembele returned to training on the basis of Barcelona. He hasn't played since November
Milan will buy out Kjaer for 3.5 million euros
22 thousand tests before each match – so Union wants to return a full stadium. One game will cost more than a million euros
Source https://timesofmalta.com/articles/view/only-maltese-citizens-will-get-100-covid-19-vouchers.799380

Michael Asciak proposes motion of no confidence against Adrian Delia

France will require face masks indoors as coronavirus picks up

Filipino dies in crash between motorcycle and Land Rover in Paola

Arsenal's Arteta hits out at 'crazy minutes' players are clocking up

Watch: Therese Comodini Cachia has 'no intention of splitting the party'

Our Parliamentary democracy is now weaker than ever - Repubblika

Atalanta striker Muriel out of hospital after head injury at home

Coronavirus: No new cases found for the fifth consecutive day

Customs dog sniffs out €22,000 in undeclared cash on airport passenger

Stan the Customs dog sniffs out undeclared €22,000 in passenger's luggage

Active COVID-19 cases stable at 5 with no new patients

UK in U-turn as it makes facemasks mandatory in shops

TMID Editorial: Covid-19 - It is not quite over

No bail for man charged with sexual assault, corruption of girls aged 11, 13