A letter to Anwar Ibrahim: What we need you to be 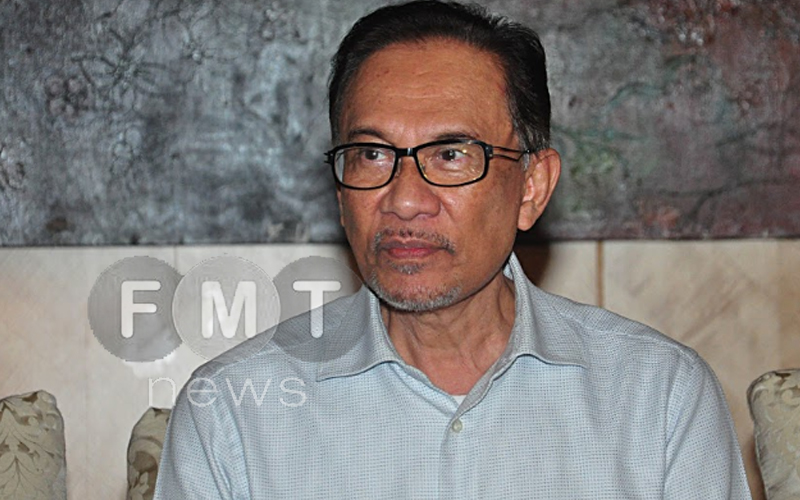 And I have hope that this nation in which I was born, that I call home and where I have lived all my life will one day see a return of the great days of harmony, when I did not refer to others by their ethnicity with terms such as “Malai chai” or “Kilinchai” as if they were aliens, and when they did not refer to me as “Cinakui” or “Cinapeie”.

I look forward to days when, as it was in the past, we will refer to others by their given names or occupations instead of their ethnicities as we so often do now. These days, instead of saying “Sulaiman the manager”, we tend to say “Malay manager Sulaiman”. Instead of saying “shop boss Sundra”, we say “that Indian boss Sundra”.

What went wrong? Well, Datuk Seri, you know better than I do. From a nation, we became nothing more than a collection of different groups of people with different skin colours who make different strange sounds called language, who happened to be thrown together on a piece of land. Some try to move ahead to gain advantage over others, either by suppressing them or getting the better of them by hook or by crook. We put people in key positions and appoint them to important jobs based on skin colour or the type of strange sounds we emit. We have prioritised this over meritocracy and the ability to perform in the interests of the entire nation so that the nation as a whole becomes great.

We know that large numbers of ex-Malaysians are contributing to the Singapore government and economy. We see Malaysians who perform excellently in overseas academic institutions who were rejected by our own academic institutions. We are also known for producing some of the top international crooks in credit card fraud, and we have produced the biggest kleptocrats in history.

We have the best talents. Our nation has produced great human beings. We have the potential to become a great nation. Whatever our skin colour, when you cut my skin open it bleeds red blood just like yours and Sundra’s. Whatever food we may eat, what comes out the other end smells just as bad. Why not allow humans to be humans? Why doesn’t our government develop and use people who are best able to make this nation grow and progress?

When will things become normal again?

If only our nation could go back to the days when Pak Mat and my father sat together in a Chinese coffee shop to chitchat. If only we could have Kassim coming over to my house to celebrate Chinese New Year again.

Before Malaysia came about, humans were humans and Malayan people were people. Twenty years after Malaysia, we began to see not humans and people, but people of different skin colours making different strange sounds.

But would Sundra smile uncomfortably if I shared my home-brewed sugarcane water with him? No! And would I be uncomfortable enjoying the fish curry that he shares with my family? No! What is wrong, Datuk Seri, what is wrong?

When I was in Sibu, I went into a Chinese shop to look for dinner. I saw a Malay satay stall right next to a char siew rice stall. What didn’t go wrong in Sibu, Datuk Seri? When I was in Kota Kinabalu, I visited a Muslim restaurant which had a Chinese selling char kuey teow.

Dear Datuk Seri, Tunku Abdul Rahman is known as Bapa Kemerdekaan and Bapa Malaysia. He built a Malaysia where we could play games together, eat together and talk together without being sensitive and stressed out. But he left behind a Malaysia which others destroyed, making it into a nation of different skin colours. We broke up as a nation. We began to question each other’s patriotism based on skin colour. We tried to wipe out our history even by changing the names of places.

Dr Mahathir Mohamad is recognised as Bapa Pembangunan Malaysia. He did much to make Malaysia known as a country we could be proud of in terms of buildings and facilities. But even then, what he built was destroyed by his successor. His successor gave Malaysia the infamous reputation as a country of kleptocracy and a land full of racial, religious sensitivities.

I do not pretend to be able to advise you. You are greater than I am in most ways. I do not even pretend that I can influence your thoughts. You see things differently because you have access to information that I do not, and you are driven by a personal agenda of which I do not know. I can only hope, and express to you my hope for my children and grandchildren, that this nation will become great again.

I also know I can only hope that you care for your health in the same way as Mahathir has done, so that you have as much time as he has had to repair the damage to this nation.

In many ways, you contributed to this damage too in your time. Mahathir is doing his part now to repair as much as possible of the damage he did. You will have your chance too, if you want to or if you see the need to.

My best hope for my grandchildren and my great-grandchildren is that they will have a Bapa Perpaduan Malaysia to look up to and be grateful for.

The views expressed are those of the author and do not necessarily reflect those of FMT.

Josep Bartomeu: Setien is doing a great job. We have full confidence in him
Pique on La Liga: Barca do not like to fall behind, but we have made every effort to change the situation
Pep Pro 0:1 with Southampton: city liked the Game, but it's not enough to win
Mandzukic is Interesting to Fenerbahce and Galatasaray. It is also claimed by Loco and Milan
Messi wants to finish his career at Barca. Bartomeu believes that Leo will not leave in a year
Gasperini about Atalanta: we Want to reach the Champions League and break the club's record for points in Serie A
Hames can leave Real Madrid for the Premier League for 25 million euros. A year ago, Atletico and Napoli offered 45-50 million euros for him. Real Madrid Midfielder Hames Rodriguez is likely to change clubs at the end of the season
Source https://www.freemalaysiatoday.com/category/opinion/2018/09/17/a-letter-to-anwar-ibrahim-what-we-need-you-to-be/

Bursa Malaysia ends on a firm note, up 1.56pc

Covid-19: Travel between Malaysia and Singapore to be known as early as Aug, says Foreign Ministry

183 new Covid-19 cases in Singapore, including a two-month high of 23 community cases

What lifestyle aspects to consider when buying a car? Here’s what Mazda CX-30 can offer Malaysians

UK decision on Huawei not set in stone, says minister

Najib’s son Nazifuddin has to pay Inland Revenue Board RM37.6m in unpaid taxes

Report: Ex-EC chair Art Harun to be named Speaker in next Parliament sitting, with Azalina as deputy

Johor developer gets Federal Court leave to appeal against compensation

In Israeli settlements, money is on annexation real estate boom

Pakatan says backing Anwar as PM candidate, ‘full mandate’ given to negotiate with all parties including Shafie

PH says it will back Anwar as PM candidate

Should a Speaker of the Dewan Rakyat represent the ruling party? — Fakhrurrazi Rashid

Singapore GE: PM Lee pledges to see S’pore through Covid-19 crisis and hand over with country ‘in good working order’

Why super rich fashionistas are not crying for Paris shows