As Pope Faces Crisis in Rome, Cardinal Warns of Split in China 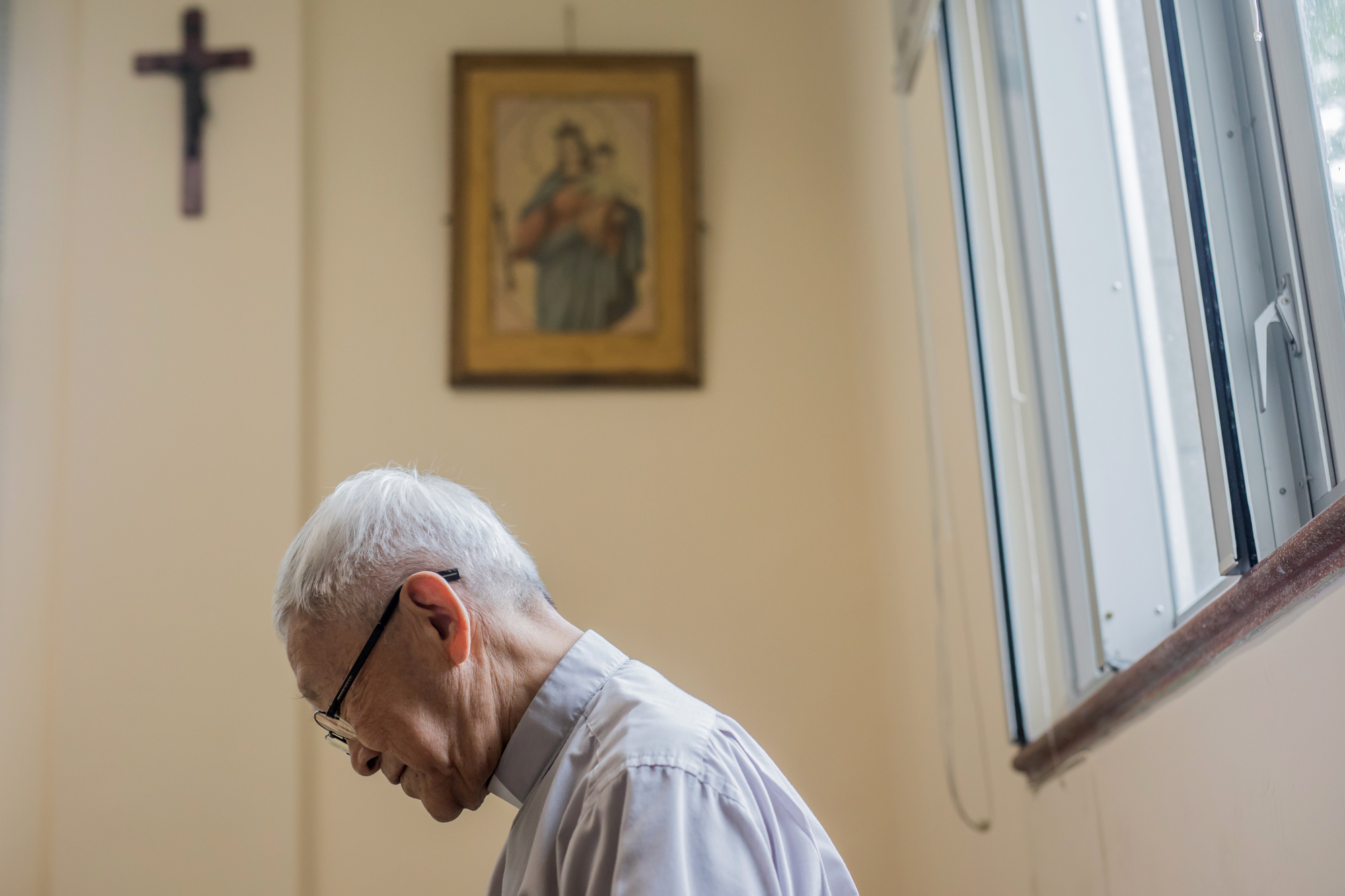 “Francis is too optimistic,” said Zen, 86. “The trouble is that he doesn’t know the Chinese government. He doesn’t have experience of a Communist regime.” (Pic Credit

While Pope Francis battles rare criticism from senior clergy in the Vatican, he’s facing a warning that the Roman Catholic Church risks devastating division from Asia.

Cardinal Joseph Zen — the retired but still outspoken former archbishop of Hong Kong — told Bloomberg News last month that he wrote to Francis to denounce efforts by the Vatican to reach a landmark agreement with Beijing on the appointment of bishops in China. Zen cautioned in a July letter that such a deal, which could lift a barrier to restoring diplomatic relations with Beijing, may also create a schism among the local faithful.

Zen’s comments highlight another potential concern for Francis, while he faces accusations from the Vatican’s former envoy to Washington that he ignored 2013 warnings about alleged sex abuse by U.S. Cardinal Theodore McCarrick. The pope has declined to comment on the claims and on Wednesday summoned top bishops to a February summit to discuss preventing clergy sex abuse.

The Wall Street Journal reported last week that a deal between China and the Vatican could come later this month. Under the agreement, both sides would have a say in appointing the church’s bishops in China, according to the article, which cited unidentified sources familiar with the situation.

The pope is risking another fight in the developing world, Zen said. The dispute in China — like so many in the Church’s long history — centers on who gets to appoint bishops, the pope or China’s government.

While talks have dragged on for years, Francis expressed optimism in a June interview with Reuters that ties were improving. China’s main demand is for the Vatican to formally recognize seven excommunicated Chinese bishops appointed by the government without the pope’s approval, according to the Wall Street Journal.

But reaching a settlement with the officially atheist Communist Party has provided elusive, especially as President Xi Jinping presides over the most widespread crackdown on religious freedom since it was written into the country’s constitution in 1982. Chinese authorities have jailed Catholic priests, destroyed churches and cut crosses from the tops of churches.

The efforts go beyond Christianity. Last month, a United Nations panel called on Beijing to respond to what it said were credible reports that as many as 1 million Muslims were being held in “reeducation camps” in the far western region of Xinjiang. A senior Chinese official warned in April against overseas individuals or entities using religion as a tool of infiltration.

The estimated 12 million Catholics in China are currently divided between the Catholic Patriotic Association, a state-run authority in which the government names bishops, and an “underground” Church loyal to the pope.

Although Zen is retired, he has retained influence as an advocate for greater democracy in the former British colony of Hong Kong. At his home in the Salesian House of Studies, Zen repeatedly rapped his gold cardinal’s ring on the table as he gesticulated for emphasis. He argued that the Church didn’t understand Xi’s intent.“I said that, ‘I’m really worried not about you, Your Holiness, but about the people around you,’” Zen said. “I said, ‘The things your collaborators are doing’ — and I used a really bad Italian word, macchinando [plotting] — ‘will have tragic and long-lasting effects, not only for the Church in China, but for the whole Church.’”

The cardinal faulted discussions about giving the pope veto power over a bishops nominated by a party-backed nominating conference.

“The conference is fake, it has no power at all,” Zen said, adding that such a move risked creating “a schismatic Church with the blessing of the Holy Father.”

The Vatican declined to comment on Zen’s remarks, or on the talks with China. The Vatican in January rebuked Zen — without naming him — for “fostering confusion and controversy” after he suggested Francis wasn’t fully informed about Vatican officials’ strategy on China.

The debate could also have repercussions for democratically run Taiwan, which counts the Vatican as one of its 17 remaining diplomatic allies. Beijing has been wooing countries away from Taipei since the island elected a president from a pro-independence party in 2016.

Taiwanese Foreign Minister Joseph Wu told Bloomberg News on Aug. 24 that the island was watching China’s efforts to boost ties with the Church. He argued that now wasn’t the time for the Vatican to switch allegiances, since “there are more and more Catholics in China that are being persecuted.”

Zen also expressed concern about what he said was an erosion of the autonomy and political freedom guaranteed to Hong Kong under China’s “one country, two systems” framework. “They just threw away ‘one country, two systems’ a long time ago, and the government is becoming so totalitarian that you can’t believe you are in Hong Kong anymore,” Zen said.

Zen cited the government’s unprecedented bid to ban a pro-independence group known as the Hong Kong National Party, calling it “ridiculous — a pretext to stop all criticism.”

Atalanta extended the winning streak to 11 matches, beating Sampdoria-2:0
Milner played his 536th game in the Premier League and was ranked in the top 5 of the League in games played
Barca midfielder Fati is removed in the Derby with Espanyol. He spent 5 minutes on the field
Suarez scored 195 goals for Barcelona and finished third in the club's top scorer list
Daniele de Rossi: People call Messi cowardly, but they are afraid to ask their wives for a remote control from the TV
Daniele de Rossi: Ronaldo is comparable to Messi in goals and trophies, but Leo's game is more fun
Pep about 5:0 with Newcastle: Manchester City tries to score more goals out of respect for the tournament and the opponent
Source https://www.freemalaysiatoday.com/category/world/2018/09/17/as-pope-faces-crisis-in-rome-cardinal-warns-of-split-in-china/

Atalanta see off Sampdoria to go third in Serie A

Health DG: Social distancing will prevent spread of Covid-19 even if virus is 'airborne'

Covid-19: 70% of cases in Malaysia were asymptomatic, says Health DG

I can attend state exco meetings until Selangor MB removes me from exco, says Haniza

Covid-19: It's the end of Malaysia's biggest cluster

‘Eat out to help out’: UK offers diners some tasty morsels

Singapore GE: After sound and fury online, historic ‘Covid election’ hustings conclude — leaving voters with much to chew over

US may see ‘some spots’ of economic damage as states see coronavirus surge, says Kudlow

RMCO: Online hearing of cases to continue in Sabah and Sarawak

Link between mineral manganese and lower risk of preeclampsia

US, China impose visa restrictions on each other in Tibet row

Russia tells US to ‘mind own business’ over media freedom

Djokovic says still undecided over US Open over Covid-19 concerns

Renault confirms Alonso going ‘back to the future’ in 2021

UK’s Sunak announces bonuses to get workers back into jobs

China coerces hundreds of critics in US to return home, says FBI chief

Terry Pratchett’s early stories to be published in September

Singapore GE: Opposition parties fan out across Singapore to canvass votes on last day of campaign