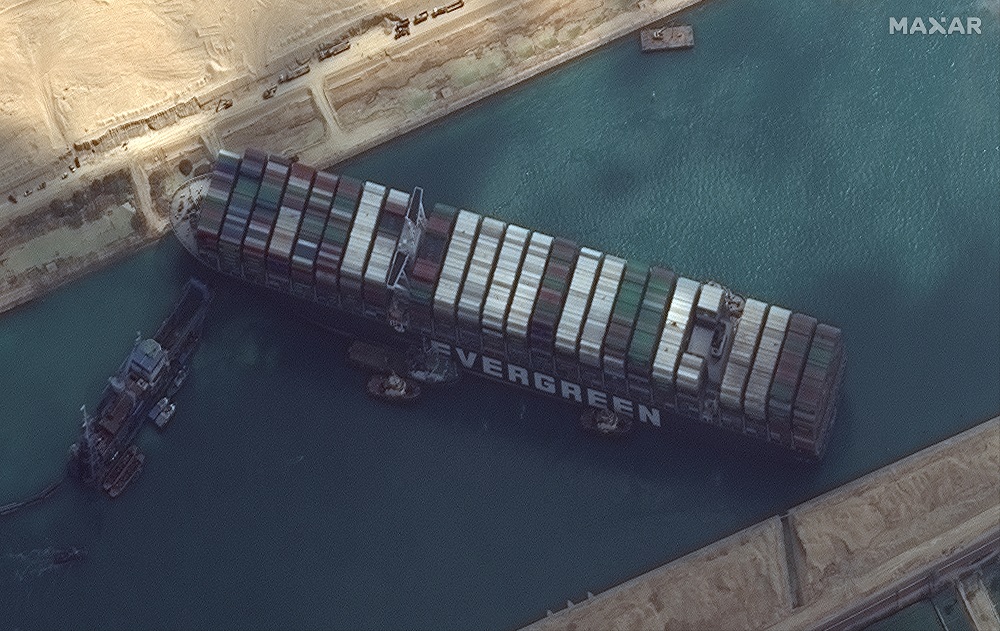 Oil prices eased as markets assumed the re-floating of the Ever Given would allow tankers to use the waterway again. There were over 300 vessels waiting to pass through the shipping route which accounts for 12 per cent of global trade. — Picture by Maxar Technologies/Handout via Reuters

The news added to optimism about world growth as markets look to President Joe Biden to outline his infrastructure spending plans this week, which could supercharge an already accelerating US recovery.

“We expect the global economy to expand robustly at 6.4 per cent this year, fuelled by a large US fiscal stimulus, with positive spillovers for the rest of the world,” said Barclays economist Christian Keller.

“Rising inflation over the coming months should be transitory, and core central banks seem committed to looking through it.”

MSCI’s broadest index of Asia-Pacific shares outside Japan added 0.3 per cent, with activity restrained by the approach of quarter end. Chinese blue chips rose 0.8 per cent.

Japan’s Nikkei gained 1 per cent, though there was some nervousness when Nomura reported its US unit could face a US$2 billion (RM8.3 billion) loss related to a client.

There was also some caution after a US$20 billion wave of block trades hit markets on Friday, reportedly linked to investment fund Archegos Capital.

The prospect of faster US economic growth has spurred speculation of rising inflation and weighed on Treasury prices. Yields on US 10-year notes eased a touch today to 1.66 per cent, but were still not far from the recent 13-month top of 1.754 per cent.

European yields have been restrained by active buying from the European Central Bank, widening the dollar’s yield advantage over the euro. The single currency was last at US$1.1786, having hit a five-month low of US$1.1760 last week.

Analysts at TD Securities noted the euro had failed to find any benefit from a very strong German IfO survey on Friday that showed business morale at a near two-year high and signs of recovery in the service sector.

“This suggests that market positioning still remains significantly skewed toward the long side in EURUSD — even though spot has seen a meaningful decline through the 200-day moving average,” they wrote in a note. “We continue to focus on downside risks from here.”

The lift in yields has weighed on gold, which offers no fixed return, and left it at US$1,730 an ounce.

Oil prices eased as markets assumed the re-floating of the Ever Given would allow tankers to use the waterway again. There were over 300 vessels waiting to pass through the shipping route which accounts for 12 per cent of global trade.

The market will also be cautious ahead of an Opec meeting this week, which will have to decide whether to extend supply limits, or loosen the spigots.

Beppe Marotta: Milan, Juve and Inter have invested 1 billion euros in transfers in recent years. Now it is impossible
Bilbao will not host Euro 2020 matches as decided by UEFA
Barnes on Super League: This is not a victory for the fans, but for those who will exploit them. Two elite groups were competing
The 29-year - old Mason is the youngest coach in the history of the Premier League. He replaced Mourinho at Tottenham
Holand missed a penalty in the match against Union. Reuss finished the ball in the goal
The Italian Football Federation will not punish Juve, Milan and Inter for participating in the Super League
Parma scored for Juventus from the penalty spot. Ronaldo stood in the wall and did not jump

5 ways to prepare for a career in counselling

When race gets in the way of our race to glory

Phase One to be completed by month-end

Shattered records of a model state

Scammers cash in on opportunity

Domestic helpers to be covered under social security plan

Which countries are leading in terms of green progress?

Chinese hackers accused of VPN attack on US defence firms

Spotify is getting into the video game business (VIDEO)

Crime buster ‘007’ Michael Sundram says, ‘ I miss being the law’

3 ways to increase your cash flow this Hari Raya

More curbs on the media ahead?

Italy approves J&J jab, recommends it for over 60s

Aviation staff struggle to get by while waiting for lift-off

Chelsea back into top 4 amid Super League drama

Quartet nabbed over murder of colleague in Subang Jaya

Man United chief Woodward to step down at end of 2021

Schalke relegated after 1-0 loss at Bielefeld

Time for Malaysia to develop its own vaccines, says Tok Mat

Investors lose over RM500,000 in oil and gas investment scam

Expert questions how Kedah would use any water compensation from Penang

Kelantan police: Some still defiant on Covid-19 SOPs despite rising cases in state

Singer Nash injured in accident on PLUS highway