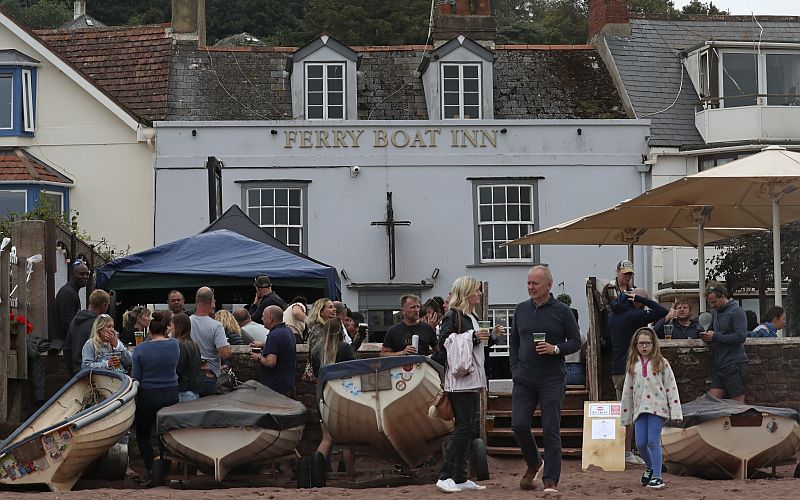 People enjoy a drink outside the Ferry Boat Inn in Shaldon on Saturday. (AP pic)

LONDON: The streets of Soho filled with merry drinkers in London on Saturday and the pubs of Manchester were packed as England’s hospitality sector returned from a three-month coronavirus hiatus.

“It feels amazing,” said Leo Richard Bill, a soldier, after getting through the door of one of London’s buzziest restaurants on the Thames River’s popular south bank.

“It’s been what, like three months since… me and everyone else haven’t been able to get outside and have a good time. So yeah, it feels good to get amongst it,” he said.

Parts of London and other cities, deserted during lockdown, sprang to life as people dressed up and came out for “Super Saturday” – the day England’s hospitality sector reopened for the first time since March.

“The boys are back in town,” one young man happily shouted while manoeuvring his pint through lines of crammed tables on a closed-off London street.

“At some point, you’ve to get back out there,” said Nick, a 38-year-old accountant, about the lingering dangers of an illness that has officially killed more people in Britain – 44,198 – than anywhere else in Europe.

Many of the social distancing rules drilled in by ministers at daily televised briefings appeared to go out the window in Soho, where groups of people meandered between pubs and restaurants without a face mask in sight.

“English people, when we are together we have a great time,” Londoner Jeff Mason said.

The government is still technically limiting how many Britons from various households can meet at a time.

But officials acknowledge that the latest rules are only recommendations, and no one expects the police to start issuing fines.

Rishi Sunak, the finance minister, urged Britons to “eat out to help out”, noting that pubs and restaurants often employed younger people entering the jobs market for the first time.

“This is really about social justice,” said Sunak.

That message did not appear to sit very well with Health Secretary Matt Hancock, who countered: “I’m no killjoy but the virus can still kill.”

Britain’s devolved structure means the pubs of Northern Ireland opened on Friday, while the ones in Wales and Scotland will have to wait for about 10 more days.

Government guidelines also insist on “minimum contact” between staff and customers, with table service only.

Drinkers are supposed to give contact details in case of an outbreak, although a group can designate a single person who can then relay any bad news to the rest.

The first nationwide closure of pubs since the Great Plague of 1665 had seen beer sales slump to the lowest level on record last month.

This pent-up demand could see pub takings soar nearly 75% to £210 million this weekend, the Centre for Economics and Business Research think-tank said.

Yet while some pubs reopened the moment the restrictions were lifted shortly after dawn, others decided to sit out the first weekend.

In the centre of Newcastle, northeast England, where pubs are normally packed at weekends, just one in three intended to open, the local council said.

“We are genuinely concerned that this could be a day of total chaos for the pub trade,” the owners of the popular Tyne Bar on the city’s Quayside said in a tweet.

“We’ve decided it’s not worth the risk.”

Prime Minister Boris Johnson has called on the public to use common sense. “My message is, let’s not blow this now, folks,” he told LBC radio.

Johnson’s handling of the entire crisis is coming under growing scrutiny, and his approval ratings have slumped in the past month.

He has been forced to defend his decision to reopen pubs on a weekend instead of a Monday, when the crowds might have been smaller and owners better able to iron out any initial kinks.

The emergency services have also warned the public not to overdo it.

“We do not need this once again,” he said.

Pochettino is the main candidate for the post of Barca coach. Setien can be sacked if the club does not win the Champions League
Pedro's drama: he was afraid of getting injured in the summer, succumbed to Lampard's persuasions – and got injured in the last game for Chelsea
Conte wants to return to Juventus. He asked the players about Sarri's future at the club
Ex - Roma coach Di Francesco took charge of Cagliari, replacing Zenga
England will remove players who intentionally cough at opponents and referees
Manchester City showed a new away form
The Icelandic national team presented their home uniforms for the 2020/21 season
Source https://www.freemalaysiatoday.com/category/world/2020/07/05/beer-flows-masks-come-off-as-england-reopens-pubs/

Warisan allies will discuss who to contest in new seats, says Shafie

Police: Husband of lecturer garotted with own scarf in Putrajaya feigned innocence

Deputy CM: Only one positive case from Covid-19 mass testing for construction workers in Sarawak

I defected out of loyalty for Anwar, Sabah rep Kenny Chua says

Najib ticked off over criticism of Sabah’s development under Warisan

Dr Noor Hisham: Infrared thermometers do not emit radiation, safe for use

Briton jailed for stabbing husband to death in Malaysia

New school term to start on Jan 20 next year

Shafie: Warisan and allies will only field loyal, electable candidates

JAL suffers US$885 mil quarterly loss due to pandemic

Players can now be sent off for coughing

When are face masks required? Here’s what Ismail Sabri says

From plague to protein: Locusts find their place on the menu

GST refund arrears to be settled by year-end

Shafie Apdal insists Sabah dissolution was by the book

Melbourne to close retail, scale back other industries until mid Sept