Cops nab Nepali over assault of countryman in park park 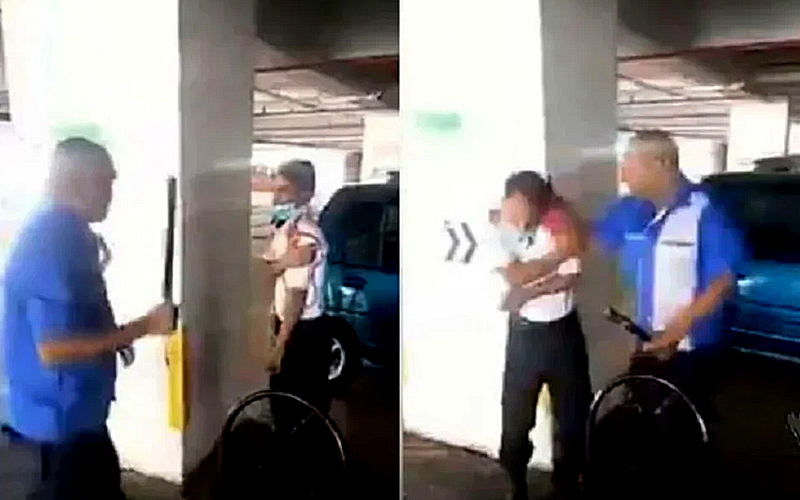 A video of the Nepali guard being slapped, beaten and assaulted with a baton went viral on social media.

PETALING JAYA: Police this evening arrested a Nepali over the attack of a security guard, who was shown in a widely-shared video being slapped, beaten and assaulted with a baton.

Wangsa Maju police chief Rajab Ahad Ismail said the 34-year-old suspect was arrested at 5pm based on information provided by the Nepal embassy.

He said the suspect is in police custody.

“We are still attempting to track down the victim and are appealing to the public to step forward if they have any information,” he said in a statement.

The one-minute clip showed the man repeatedly slapping, punching and hitting the guard, also a Nepali, with a baton while scolding him in Malay.

“What’s your problem?” he was heard telling the guard, who did not retaliate. “Are you messing around? You come here to look for work, not problems.”

According to the video timestamp, it was recorded on July 7. The incident took place at a car park of a condominium at Jalan Madrasah in Wangsa Maju.

Police had initially identified the attacker as a Pakistan national on Friday.

They urged witnesses and anyone with information to contact Shahrul Azzuan Sharom at 016-2014334 or M Hussin Sallehuddin Zolkifly at 017-2446363 or the nearest police station.

Klopp on 2-0 with Chelsea: Mane was rewarded for Kepa's pressure. Perfect start for Tiago
Liverpool and Everton scored 6 points after 2 rounds of the Premier League. This is the first time since 1993
Lampard on 0:2 with Liverpool: a Serious mistake by Kepa. Without red and with a penalty scored, it would have been 1-1
Mane on Kepa's mistake: Knew he would have few options when he got the ball. He made a mistake, I scored
Will bale be revived at Tottenham?
Tiago broke the Premier League record with 75 assists per half - time-more than any Chelsea player in the entire match
Kroos on captains: Ramos is the best possible option
Source https://www.freemalaysiatoday.com/category/nation/2020/08/03/cops-nab-nepali-over-assault-of-countryman-in-park-park/

Maupay strikes twice as Brighton ease to win at Newcastle

How to look cool on an electric scooter

Kane shows there’s more to his game than goals

Thousands march in Germany urging EU to take in refugees

Anwar: I can get the numbers to become PM

PKR event in Sabah shut down by cops, EC for not having permit

Cabinet to discuss Covid-19 in Sabah as cases rise

Foreigners planning to cause trouble at Sabah polls, say police

Illegal utility pipes in drains ‘among causes of KL floods’

After DAP suggests he gives way to Shafie for PM post, Anwar says he can get the numbers

Arsenal a long way from being title contenders, says Arteta

If US election winds up in Supreme Court, Ginsburg’s death will loom large

Foreigners planning to enter Sabah and cause trouble during polling, says police chief

Hajiji to sue those behind video alleging land grab

18 new Covid-19 cases, including four imported infections and one in the community

Unite against ‘reckless’ US, Iran urges the world