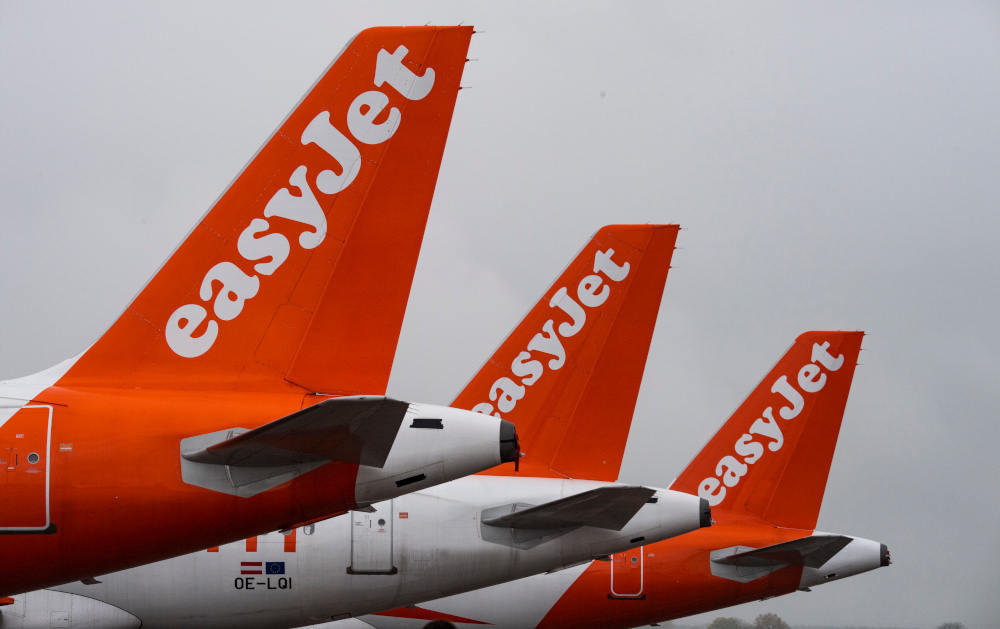 EasyJet shares rallied around five per cent in late deals on the London stock market ― and there were solid gains for European rivals. — AFP pic

Bookings had soared by 337 per cent by late Monday compared with a week earlier, EasyJet said in a statement issued after Johnson's announcement.

EasyJet shares rallied around five per cent in late deals on the London stock market ― and there were solid gains for European rivals.

“The prime minister... has provided a much-needed boost in confidence for so many of our customers in the UK with demand for flights up 337 per cent and holidays up 630 per cent already compared to last week,” said EasyJet chief executive Johan Lundgren.

“Airline shares roared higher on the promise of a salvaged summer season,” said Markets.com analyst Neil Wilson, noting however that “international travel will remain problematic and subject to restrictions, isolation and testing”.

Separately yesterday, Britain's InterContinental Hotels Group revealed that it slumped into a net loss of US$260 million (RM1.05 billion) last year as coronavirus decimated the hospitality and tourism sector.

That contrasted sharply with profit after tax of US$385 million in 2019.

However, the group also issued an optimistic outlook in the context of the ongoing global vaccines rollout.

“2020 was clearly the most challenging year in our history, with Covid-19 heavily impacting demand across our industry,” said IHG Chief Executive Keith Barr.

“2021 has begun with many of these challenges still in place, with more meaningful progress towards recovery for the industry unlikely until later in the year and dependent on global vaccine rollouts, lifting of restrictions and an acceleration in economic activity.” ― AFP

Coman has rejected Bayern's offer of a new contract until 2026
Holand's transfer is a priority for Real Madrid. The deal could cost 270 million euros (As)
Atletico controlled the first half of the derby thanks to Simeone's bold plan. Then the game opened up, and Casemiro's spurts saved Real Madrid
Laporta on Messi: Barcelona is a family. I hope this will help to ensure that the best player in history remains at the club
Manchester derby in a deserted city: fans instead of players meet their cars, Zinchenko gives an Interview in Russian, Sulscher breaks the series Pep
Laporta on being elected president of Barca: The club must once again be happy and economically sustainable
Liverpool have not won at Anfield in 8 consecutive league games for the first time since 1952

East Timor locks down for the first time since pandemic began

EMCO at Pahang Felda areas lifted ahead of schedule

‘Drunken fish’ at Sungai Kulim caused by lack of oxygen

Nasa Mars scientists spur girls to ‘reach for the stars’

Worst is over, economy will strengthen this year, says Zafrul

Women get fired for being pregnant in 38 countries, says World Bank

UK and others agree to fast-track adapted Covid vaccines

Nearly 5,200 frontliners in Penang vaccinated against Covid-19 as at March 7, says Kon Yeow

Why go after those who signed up for amnesty plan? Lim asks LHDN

No link found between S. Korean deaths and virus vaccine

No point in numbers if you don’t champion women’s issues, says Azalina

Worst is behind us, Malaysia will emerge stronger by year-end, says finance minister

Rush to bitcoin? Not so fast, say keepers of corporate coffers

England’s children go back to school after virus lockdown

Oil soars above US$71 after key Saudi crude terminal attacked

Khairy: Those travelling in between Covid-19 vaccine doses still subject to mandatory quarantine

Guan Eng: DAP cooperation with Umno only when it is of necessary public interest

What it meant to win the Players Championship

US govt goes to Federal Court to defend sacking of guard

Bale over psychological scars of past injuries, says Mourinho