Hong Kong would be obliterated in 14 minutes if not for me, says Trump 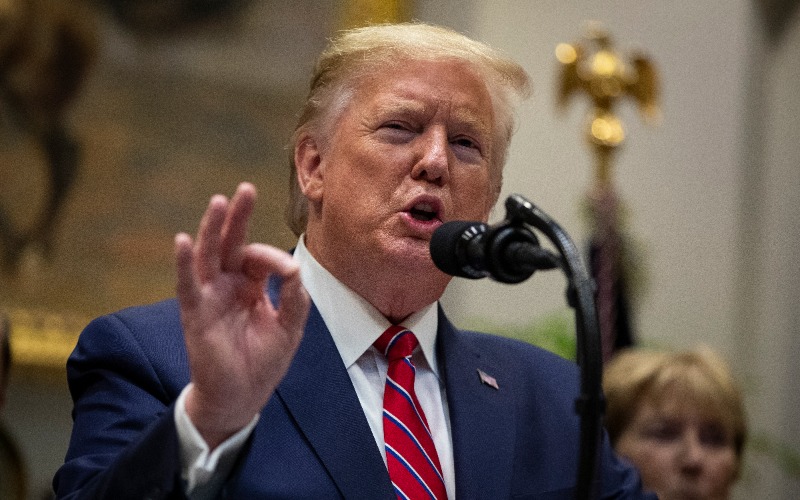 US President says a ‘million soldiers standing outside are not going only because I asked Xi’. (AP pic)

WASHINGTON: US President Donald Trump said Friday he had saved Hong Kong from being destroyed by persuading Chinese President Xi Jinping to hold off on sending in troops to crush its pro-democracy movement.

“If it weren’t for me, Hong Kong would have been obliterated in 14 minutes,” Trump said in a scattershot early morning interview with Fox News.

Asked whether he would veto the legislation, green-lit by an overwhelming margin in Congress on Wednesday, Trump equivocated.

“I’ll tell you we have to stand with Hong Kong but I’m also standing with President Xi. He is a friend of mine, he is an incredible guy,” Trump said.

Trump cast his relationship with Xi as the bulwark keeping China from moving against the pro-democracy movement that has rocked Hong Kong during almost six months of increasingly violent protests.

He added that a “million soldiers standing outside of Hong Kong are not going only because I asked him: ‘Please don’t do that. You will be making a big mistake. It will have a tremendous negative impact on the trade deal.'”

Trump acknowledged that the tension over the former British colony – handed back to China in 1997 – has complicated efforts to strike a trade deal with Beijing, a source of economic uncertainty as Washington heads into an election year.

US and Chinese trade negotiators are “potentially very close” to a deal, he said.

Sabah wants to manage own food stockpile during Covid-19 crisis

Price we pay for not preserving forests

Cannavaro urges Italy to summon spirit of 2006 to beat coronavirus

Worldwide lockdown intensify as Spain sees yet another deadliest day

US coronavirus deaths reach 3,393, exceeding death toll in China, according to Reuters tally

Lockdowns may have saved 59,000 lives in Europe, says study

Mickelson ‘working on’ 1-on-1 golf rematch with Tiger

Dzulkefly: Tabligh attendees slow to step forward due to lack of symptoms, not distrust

How Parliaments function in time of crisis — Fakhrurrazi Rashid

US Army Corps to build hundreds of temporary Covid-19 hospitals

Coronavirus death toll in Italy’s Lombardy rises by around 381 in a day, says source

Covid-19: Is a homemade face mask better than nothing at all?

Federer wows fans on Twitter with video of trick shots

Catch a glimpse of the US Legend Car

Corolla Altis: A Beemer in disguise?

A fun day at the MINI track

2020 Bezza: The pick for practical use

Coronavirus may kill, but so does hunger, says Brazil’s Bolsonaro

Classic Chatter: Time to get a Holden

Classic Chatter: Even the mighty can fall

No masks, so suspect brought to court with garbage bag over head

Classic Chatter: When BMW stole its own trademark

183 charged with going against stay at home order in Penang

Those hiding people linked to Covid-19 clusters could face action