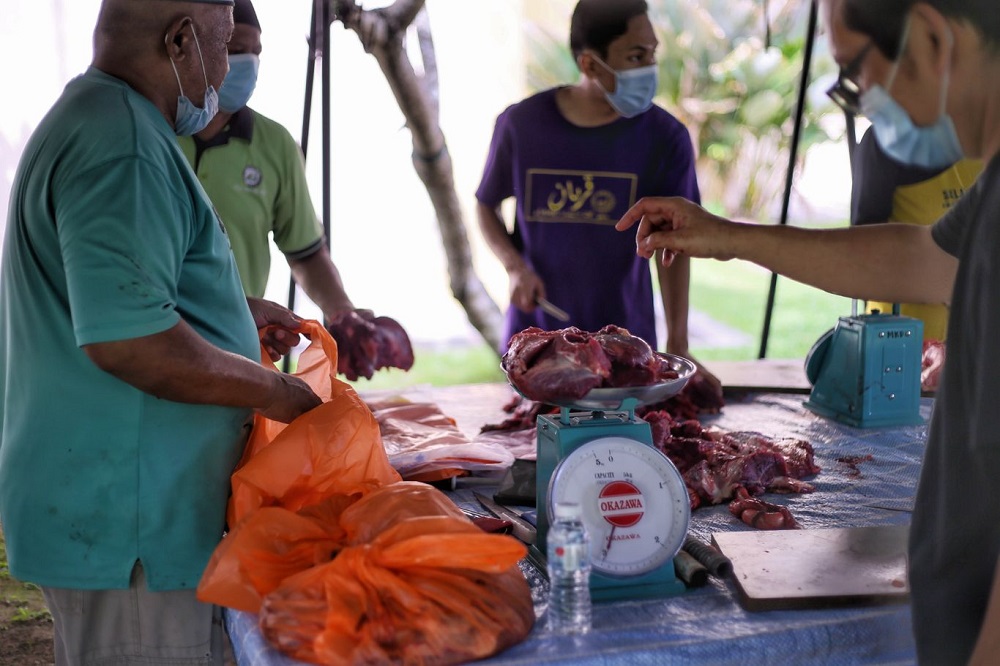 Members of the public adhere to Covid-19 SOPs as they distribute meat following the ritual slaughter of a cow during Hari Raya Aidiladha at the Kota Damansara mosque in Petaling Jaya July 20, 2021. — Picture by Ahmad Zamzahuri

Nor Azura Abdullah, 46, who is also former safety engineer, said since not many people performed sacrificial slaughter this year due to the Covid-19 pandemic, they took the initiative to donate meat to poor families and single mothers via drive-through.

“A total of 15 cows were slaughtered in Tanah Merah and I brought the meat back to Pulai Chondong to be distributed to 60 asnaf and single mothers here,” she told reporters when met at her house in Kampung Surau.

The mother of four said she is continuing the welfare work entrusted to her by her late husband, Mohd Hadzramy Abdullah and her late father-in-law, Abdullah Mohamed, who was Pulau Chondong assemblyman.

One of the recipients, Sudin Tahar, 54, said he was thankful for the concern shown by Nor Azura who had come forward to help ease their burden. — Bernama

Elon Musk’s Neuralink raises over US$200m from Google Ventures, others

Study: To live longer, eat foods rich in omega-3 (but you have to also quit smoking)

King: I didn’t consent to revocation

PMO: Muhyiddin is carrying out his duties based on the Constitution

MP: Why were contract doctors queried by cops?

Govt is intact with 110 MPs, ministers urge Muhyiddin not to resign

Anwar demands that Muhyiddin step down as PM

Positive cases sat out of Parliament

BUILDING UP TOWARDS ECONOMIC RECOVERY

DG: Most cases asymptomatic or mild

L’Oreal results at pre-pandemic levels in 2021 first half

Phase One delivery: Destress at home with this fluffy matcha double 'fromage' cheesecake from Cheras' The Only Cheese Cake

A Parliament in disarray: A timeline from political uproar to the discovery of Covid-19 cases and lockdown

Confusion over BN letterhead to media on support for Muhyiddin

Najib stands with Perikatan Nasional government, but not Muhyiddin as Prime Minister

Dr M calls for PM and Cabinet to resign

In JB, two men who stopped for tyre change in middle of road killed after pick-up truck crashes into their car along Jalan Skudai

Asian cities have the worst air quality in the world

BeachBot is cleaning the beaches of ciggie butts

Covid-19: Four people who have but no symptoms visited four Catholic churches, contact-tracing with MOH ongoing

Covid-19: 129 new locally transmitted cases in Singapore, including 50 unlinked ones and 30 others in Jurong Fishery Port cluster

Eating foods rich in omega-3 will help you live longer

A revelation, four suspensions, and a lost agenda