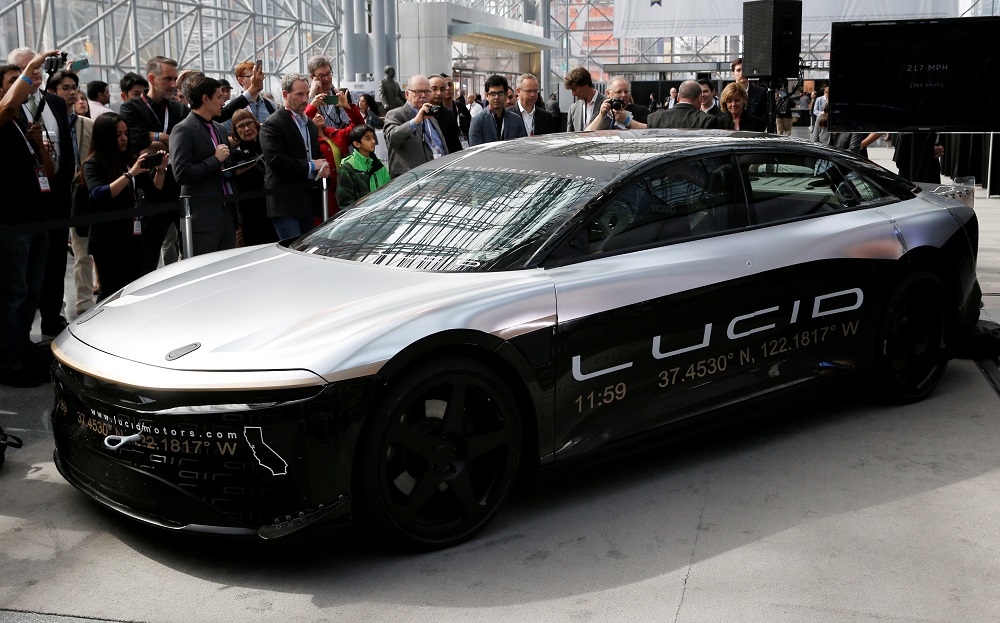 NEW YORK, Feb 24 ― Stock market investors valued electric vehicle maker Lucid Motors at US$62 billion (RM250.7 billion) yesterday after a deal to merge with blank check firm Churchill Capital IV, sparking some concerns about the real worth of the company which has yet to start regular production.

In comparison, General Motors Co was worth about US$72.5 billion at mid-day yesterday, while China's leading electric car maker Nio Inc was valued at US$72 billion.

Shares in Elon Musk's Tesla, which have surged more than 10 times in value over the past year to around US$900, fell for a second day in a row yesterday, with its mid-day shares at US$674 and its market capitalization at US$647 billion.

Lucid's first electric car, the luxury Air, won't go in production now until late 2021, later than the spring 2021 launch initially planned, the company said in a filing. Officials on Tuesday said they do not expect Lucid to be cash-flow positive until 2025.

Shares of Churchill Capital IV Corp fell more than 40 per cent, a day after it agreed the merger with Lucid. At mid-day, CCIV shares had recovered slightly to US$39.00, down 32 per cent.

The Lucid-CCIV deal includes new private investment that valued the company at US$24 billion, just a fraction of Tesla, but still the biggest ever involving so-called special purpose acquisition companies (SPACs).

“We're bringing the world's best technology to the market this year, here in the US I think the valuation is a reflection of our technology,” Chief Executive Officer Peter Rawlinson told CNBC on Tuesday when asked whether Lucid's valuation made him nervous.

Rawlinson told investors on a call that its Lucid Air Dream edition is virtually sold out, while former Citigroup banker Michael Klein, head of Chruchill Capital, said the company has sufficient funding for its first three models.

Time for a correction?

Rawlinson said that the carmaker expects production of a less expensive, sub-US$70,000 version of the luxury sedan in 2022, followed by a new model code-named Project Gravity in 2023.

The recent run-up in valuations of several EV startups, including Nikola Corp and Lordstown Motors, that have yet to produce saleable vehicles or meaningful revenue, has drawn comparisons to the dotcom bubble of 1999-2000, with analysts and investors expecting a near-term correction.

“We think Tesla has been valued for teleportation, so the correction is probably a very healthy thing. This allows investors to watch for potential entry points in names they feel they might have missed,” he added.

Lucid, run by ex-Tesla engineer Rawlinson, is the latest EV firm to tap US capital markets, with investors rushing into the sector as tougher emission norms drive a switch to electric vehicles.

With its roster of deep-pocketed financial backers, it is one of the strongest of the flock of startups challenging Tesla's dominance.

After Lucid priced its Air sedan, starting at US$77,400, Musk announced a price cut to its flagship Model S sedan. “The gauntlet has been thrown down!” he tweeted.

However, Lucid's five-year timeline to get to production of 250,000 vehicles a year is a reminder of the challenges of scaling up mass production in the auto industry.

Pele: Mbappe can be my successor. I see myself in his game
Jurgen Klopp: I don't want a player who wants to leave if we don't qualify for the Champions League
PSG has reached the 100 million subscribers mark on social media
Fiorentina may invite Gattuso in the summer. The parties have already been contacted
In 2021, Spartak does not win two matches in a row, Krasnodar-in general 4! Whose series of failures will be Interrupted?
Dortmund coach Terzic: The matches against Bayern showed that we are closer to them
Kovacs returned Monaco to the top of Ligue 1. Good defense (and a bunch of individual mistakes), the best standards in Europe and problems with positioning

No pressure on police force to take action against opposition leaders, says IGP

Myanmar asks India to return 8 police who fled across border

Lodge report with us over offer to switch sides, MACC tells Sekijang MP

Myanmar authorities disturb grave of ‘Everything will be OK’ protester

13 new Covid-19 cases in Singapore, including 1 in the community

Grave of slain ‘Everything will be OK’ protester disturbed in Myanmar

Banks are the worst during a crisis, says AirAsia boss

We are nobody’s political tool, we are independent, says MACC

Missing top 4 would not lead to mass exodus, says Klopp

Claims made in viral message, including Azmin as DPM, are false, says PPBM

What a nightmare, bosses group says on travel rules

205 migrants in KL apartment held for not having valid documents