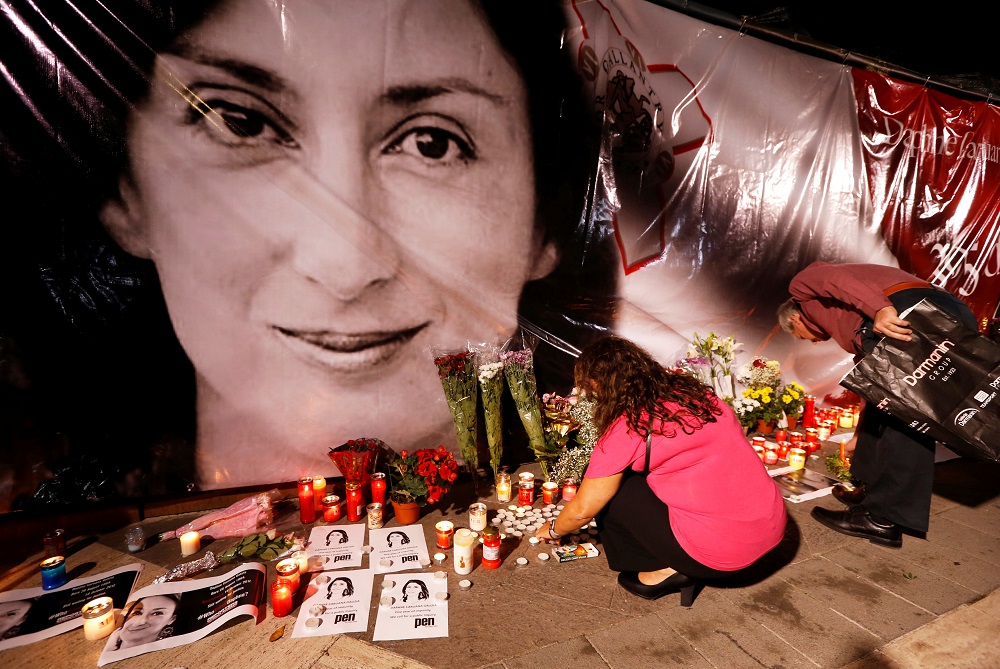 People lay flowers and candles at a makeshift memorial during a vigil and protest on the first anniversary of the assassination of Daphne Caruana Galizia in a car bomb, outside the Courts of Justice in Valletta, Malta October 16, 2018. — Reuters pic

VALLETA, Feb 24 — One of three men accused of planting a car bomb that killed Maltese anti-corruption journalist Daphne Caruana Galizia in 2017 dramatically pleaded guilty yesterday and was swiftly sentenced to 15 years in jail.

Vincent Muscat received a relatively lenient sentence after the judge said he had been cooperating with police for years, in a case that rocked the Mediterranean island nation.

The murder of Caruana Galizia, who exposed cronyism and sleaze within Malta’s political and business elite, sparked international outrage and protests that forced prime minister Joseph Muscat to resign.

Two alleged co-conspirators are still awaiting trial over the attack on October 16, 2017, while a businessman, Yorgen Fenech, has been charged with masterminding the murder.

In a statement read out by their lawyer, Jason Azzopardi, the victim’s family expressed their "hope that this development will begin the road for total justice for Daphne Caruana Galizia".

The murder of the 53-year-old robbed her of "her right to enjoy her family and grandchildren," he said.

"I say all this because if Daphne’s family were to respond today with all the emotions, it would be obvious as to what their reply would be," the lawyer said.

Prime Minister Robert Abela said in a statement that the plea and sentence were "a step closer towards justice. A step closer to establish the truth in this dark chapter for Malta and for the Caruana Galizia family."

Vincent Muscat and brothers George and Alfred Degiorgio, all in their fifties at the time, were arrested in December 2017 for carrying out the murder, and charged in July 2019.

In a pre-trial hearing yesterday, Muscat’s lawyer Marc Sant informed the court that his client wanted to register an admission.

When asked how he wanted to plead, Muscat replied: "Guilty."

But Muscat repeated that he pleaded guilty to the charges, which include murder, possession of explosives, placing the bomb, and criminal conspiracy.

He was sentenced just hours later to 15 years in prison, in a deal with the prosecution in which he renounced his right to appeal.

The judge said that, according to testimony by lead murder investigator Keith Arnaud, Muscat had been cooperating since 2018.

"This assistance may also result in the start of prosecution against third parties," she said.

Caruana Galizia, who has been described as a "one-woman WikiLeaks", was known for investigating high-level corruption, and contributed to the 2016 Panama Papers data leak.

She was killed in a car bomb targeting her vehicle not far from her home in the north of the island.

One of her sons accused prime minister Muscat of being complicit and turning Malta, a former British colony that joined the European Union in 2004, into a "mafia island".

Muscat stepped down in January 2020 following widespread anger and mass protests over his perceived efforts to protect friends and allies from the investigation.

Muscat’s chief of staff, Keith Schembri, who was accused by Caruana Galizia of being involved in corruption — which he denied — is among those alleged to be implicated.

Businessman Yorgen Fenech is currently awaiting trial for being the mastermind.

The owner of a Dubai company, 17 Black, on which Caruana Galizia had reported, Fenech was arrested in November 2019 as he was sailing away from Malta on his yacht. — AFP

Sancho's injury is worse than expected. He will not play with Sevilla in the Champions League, Guerreiro is in doubt
Gerrard has the first trophy in his coaching career. As a player, he won 11 trophies
Keane on Brunu's words about statistics: A lot of nonsense. I don't understand why players care about the words of experts
Conte in front of Atalanta: They are aware of their strength, there are strong players-on the bench, too. It will be difficult
Gerrard's Rangers have won the Scottish championship ahead of schedule. This is their first title in 10 years
Pep Guardiola: Solskjaer is a great coach, Manchester United is getting harder to beat every year
Fowler on Salah: If he wants to leave, he should sell. Like Coutinho. The money was taken by van Dijk and Alisson

Putrajaya roadblocks in place to bar outside people, say police

Despite RMCO, roadblocks continue in Putrajaya to control inter-district travel

Domestic workers are not servants, says NGOs calling for amendment of Employment Act 1955 to protect the vulnerable group

World No.1 record in the bag, Djokovic focuses on more majors

Hundreds of houses destroyed by twin tremors in Greece

Village in Kuching goes under EMCO

Freedom is like heaven, says Malaysian who escaped gallows

Health minister: Over three million have registered for Covid-19 vaccination in Malaysia

China to set up vaccination stations for overseas Chinese, Olympians

400ha in Perak for grads who want to farm

TNB forecasts a rebound in its revenue this year

China says it hopes US will remove ‘unreasonable’ restrictions

China says hopes US will remove ‘unreasonable’ restrictions on cooperation

US defence chief Austin likely to visit India next week

Mustapa: 12th Malaysia Plan to be tabled once Parliament is allowed to sit

Pope Francis prays for ‘victims of war’ in Iraq’s Mosul