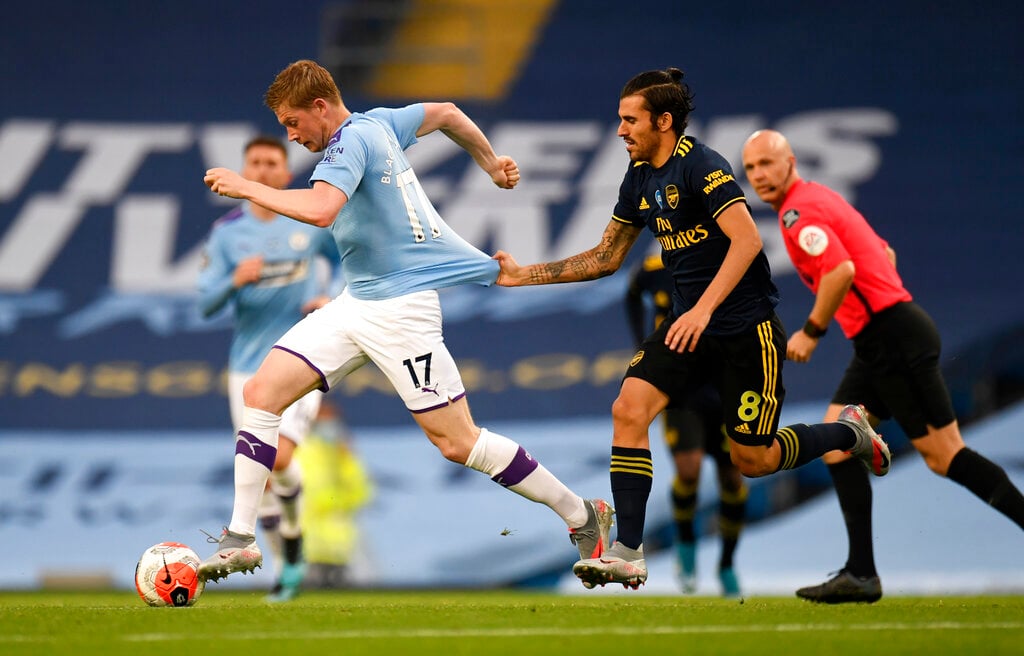 MANCHESTER: Manchester City’s 3-0 win over Arsenal as the Premier League returned to action on Wednesday attracted a peak of 3.4 million viewers, a 94% increase on the season’s average audience, according to broadcasters Sky Sports.

The audience for the game, which averaged 3.1 million viewers, was close to the season’s most-watched match on Sky Sports, October’s clash between Manchester United and Liverpool.

Sky said the earlier match between Aston Villa and Sheffield United drew a peak audience of 2.7 million (2.4 million average), which was a 43% increase on the season average, despite being played at a much earlier time than most midweek broadcasts.

The broadcasters said their online platform skysports.com also received impressive numbers with 4.9 million unique users on the site and 12 million views of Premier League videos in less than 24 hours.

Getafe goalkeeper Soria on 0:1 with Real Madrid: a Draw would have been fairer
Courtois has kept 16 clean sheets in the League – more than anyone in the top 5 leagues of Europe
Ex-referee Andujar Oliver: Carvajal was clearly knocked down in the Getafe penalty area. A clean penalty
Carvajal on 1-0 with Getafe: we Should have taken advantage of Barca's misfire. Everything depends on us
Gattuso on 0:2 with Atalanta: I'm furious. I didn't like the attitude of the players
The match between city and Liverpool in an empty stadium is a very strange feeling. Pep reacts to a reporter shouting, Gary Neville can be heard across the podium
Sterling scored for Liverpool in the Premier League for the first time. It took 9 matches and more than 11 hours of play
Source https://www.freemalaysiatoday.com/category/sports/2020/06/18/man-city-arsenal-match-attracted-3-4-million-viewers-a-94-increase/

Second season of ‘Never Have I Ever’ on Netflix is on

‘Next season started today’: Sterling has Liverpool in his sights

City honour Liverpool... then hammer them 4-0

Balmain to break new ground with performance on the Seine

Real Madrid close in on title after edging Getafe

Atalanta closer to Champions League with win over Napoli

‘Surprised’ Vettel insists there was no new Ferrari deal

In drawing its election battle plan, Pakatan cautioned against writing off ‘Bossku’ Najib

Go for second Covid-19 test or else, cops warn those who returned from abroad

Holders of Pakistani pilot licences barred from working in Malaysia

India clears purchase of 33 Russian combat jets worth US$2.4 bil

Up to 20,000 spectators to attend French Open each day

Hamilton insists Formula One must speak out on racism

Link between high blood pressure while pregnant and heart disease

Hamilton again says his sport must speak out on racism

Trump cheers US economy after June jobs surge despite virus

Singapore GE2020 party broadcasts: PAP has ‘delivered what we promised’, but Opposition warn against having an unchecked ruling party

Drive-thru wedding reception in Kluang becomes a hit among netizens

Putin thanks Russians for ‘support and trust’ after vote

At least 126 killed as Myanmar jade mine collapse buries workers

Covid-19: No fans at La Liga stadiums for rest of the season, say organisers

5 things to know about the Hagia Sophia

Indonesia seeking its own Covid-19 vaccine amid worry about access

Bus to be provided for students who walk 3.8 km between hostel and school

Depression common during transition to menopause

The pitfalls of UK’s citizenship offer for Hong Kong