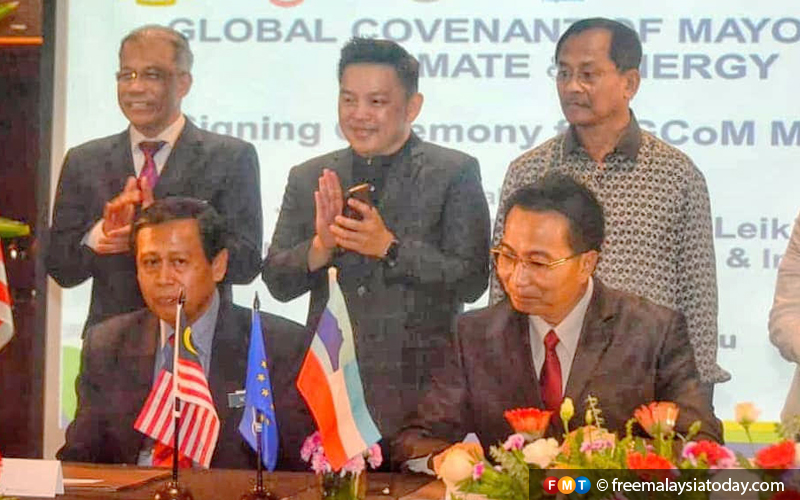 International Trade and Industry Minister Darell Leiking (standing, centre) at the Global Covenant of Mayors for Climate and Energy in Kota Kinabalu today.

KOTA KINABALU: International Trade and Industry Minister Darell Leiking has welcomed the additional 13 state seats for Sabah but believes another redelineation exercise is in order.

Speaking to reporters after officiating the Global Covenant of Mayors (GCOM) for Climate and Energy here today, the Penampang MP said his constituency is bigger than neighbouring Papar but only has two state seats compared to Papar, which will have three.

“Actually, Penampang is surrounded by three federal constituencies, each with three state seats but we are given only 2 seats,” he said.

Leiking admitted the issue did not come up when Parliament debated the 13 new state seats because the motion had already been approved in the Sabah state assembly.

He said he would discuss the matter with the state government, particularly Chief Minister Shafie Apdal and Local Government and Housing Minister Jaujan Sambakong, to add a new state seat in Penampang.

Leiking also said it is also time for Sabah to have additional parliamentary seats.

“I support Jaujan’s call for additional parliamentary seats but we have to wait for the 13 state seats to be gazetted first,” he said.

Commenting on the proposed Papar Dam project, Leiking acknowledged that there were different opinions.

He said he had asked that both Shafie and Infrastructure Development Minister Peter Anthony to reveal details of the RM3 billion project and explain them to the people as soon as possible.

Faty scored the 9,000 th goal in the history of Barcelona
Griezmann scored in La Liga for the first time since February with a pass from Messi
Suarez came out on the 3rd place in the list of the best Barca Goalscorers in history
Guardiola lost 3 away games in a row in the League for the first time in his career
About Lautaro Marotta: He has not shown the slightest desire to leave
Conte on 1:2 with Bologna: Inter's Level is much lower than expected
Jurgen Klopp: Liverpool need three points, not a record. You can't break a record if you think about it all the time
Source https://www.freemalaysiatoday.com/category/nation/2019/07/20/minister-wants-1-more-state-seat-for-penampang/

What about us, say Papar dam residents

Singapore GE: WP must say if it would accept NCMP seats, instead of ‘playing games with voters’, says PAP’s Heng Swee Keat

Over 45,000 to benefit from Sungai Golok flood mitigation

Virus cases go up in China as transmission risks remain

RMCO: Police nab 21 including foreigners and seize drugs at wild party in KL

Boat sinks off Semporna: One rescued, another missing, says MMEA

Pensioner nabbed for alleged rape of daughter, stepdaughter in Penang