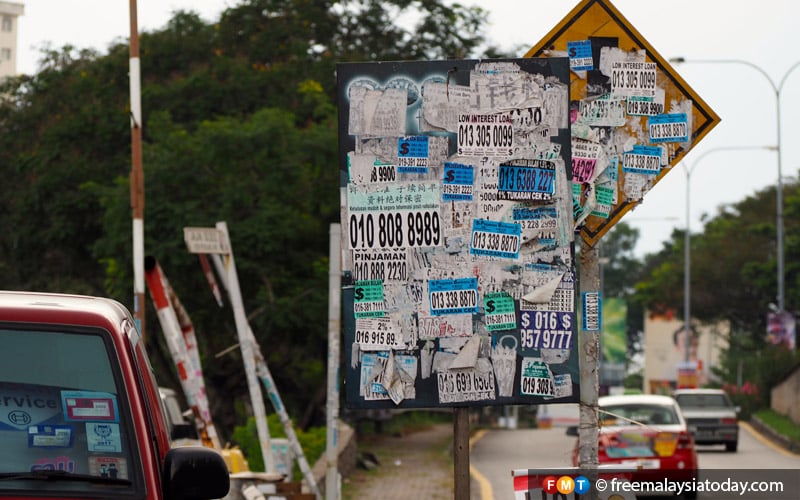 KUANTAN: A 39-year-old female school teacher, who borrowed money from a loan shark two years ago, found printed material bearing her picture, accompanied by humiliating words, displayed in an area near her school yesterday.

According to Pahang police head of commercial crime Mohd Wazir Mohd Yusof, the teacher at a government primary school had borrowed RM10,000 from the loan shark in December 2017, and had signed a blank agreement.

In her report lodged yesterday at the Jaya Gading police station, the teacher said she had been disturbed since April this year by the loan shark.

She said the loan shark contacted her at school and at home one month after she cancelled her ATM card, which she had given to him in January last year to make repayments.

The teacher made the cancellation after repaying RM18,000, Mohd Wazir told reporters.

She also claimed that she had only received RM8,600 from the RM10,000 borrowed because the balance had been retained for “legal and processing” fees, and that she had been required to make monthly repayments of RM1,200 for 38 months.

Sterling on the record for goals in a season: we Want to win the Champions League and the FA Cup, otherwise they won't mean anything
Sheffield will finish the Premier League season without defeats from clubs from London. 22 points in 10 games and 5 home wins
Bonucci on Juve's draw with Atalanta: We must look at the result. This is how Championships are won
Sterling surpassed Yaya Toure to become Manchester City's 2nd goalscorer in the history of the Premier League
Gasperini on two penalties for Juve: They are above any rules in Italy. Did we have to cut off our hands?
Sarri Pro 2:2 with Atalanta: We played with one of the best teams in Europe right now
Pep Guardiola: Manchester City have won a place in the Champions League on the pitch. I hope that UEFA will allow us to play
Source https://www.freemalaysiatoday.com/category/nation/2019/07/20/primary-school-teacher-hounded-by-loan-shark/

IGP: All ‘frozen’ cases at Bukit Aman’s commercial crime unit to be reopened

Ahead of Aidiladha, Pahang bars Muslims from holding ‘korban’ ritual at home

US town grows money from trees during pandemic downturn

Nothing gives champagne its fizz like a humble radish

Action against transgenders will do more harm than good, says group

Population and Family Development Board: Infertility among Malaysian men on the rise

Continue engaging with transgenders like you used to as mufti, women’s group urges minister

Anwar, Azmin to be proposed as select committee members

How to avoid handballs? Cut off players’ arms, says Gasperini

Minister’s nod for authorities to go after trans persons will lead to spike in discrimination, violence, says rights group

Ex-Nissan boss Ghosn says helping everyone who stood by him

Singapore GE: Sengkang residents give reasons why they plumped for WP, including a better connection with its candidates

Thousands call on Bulgarian government to resign in anti-graft protests