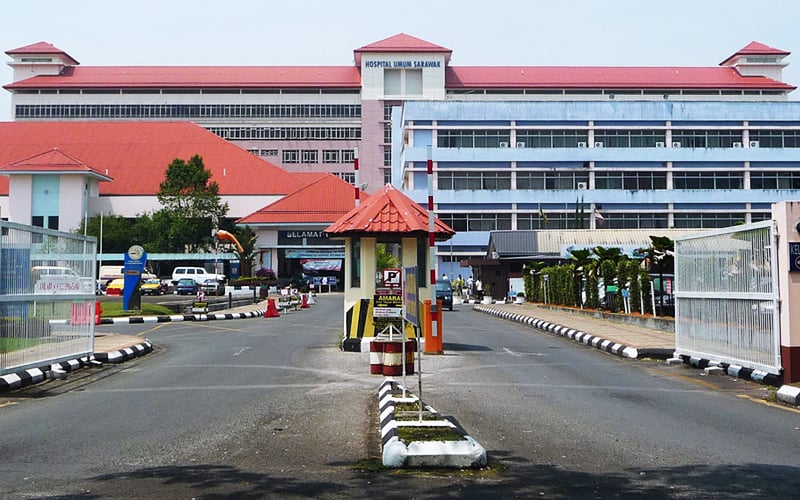 The Covid-19 victim died at the Sarawak General Hospital in Kuching yesterday.

KUCHING: A 72-year-old man from Kuching has become the latest victim to succumb to Covid-19.

According to the Sarawak disaster management committee, the case could be a local transmission since the patient did not have any travel history.

His death yesterday brings the Covid-19 toll in Sarawak to 18. The last death linked to the virus in the state was reported in April.

The committee said the victim, who suffered from diabetes and high blood pressure, had sought treatment at the Borneo Medical Centre on Thursday after developing fever two days earlier.

“The patient was referred to the Sarawak General Hospital and was placed in the isolation ward,” it said in a statement, adding that he was tested positive yesterday.

“The victim died on the same day after his condition worsened. The cause of his death was due to multi-organ failure due to pneumonia and Covid-19.”

The committee said contact tracing and investigation on the source of the infection were being carried out by authorities.

Sarawak also also reported a second Covid-19 positive case, involving a local man who had just returned from the UK.

The patient had tested negative for the virus at the Kuala Lumpur International Airport on Thursday.

“However, he was brought to a hotel for quarantine as soon as he arrived at Kuching International Airport.

“A second test was conducted and he tested positive for the virus. The patient has been brought to the Sarawak General Hospital for further treatment,” it said.

A total of 577 positive cases have been reported in the state so far. Five hundred and fifty-two have recovered and have been discharged from hospital.

Lewandowski on Chelsea: They are playing very well, but we are Bayern
Juventus wanted to sign defender Akieme, but Barcelona refused
Lazio has agreed with Mayoral and will offer real 15 million euros
In Romania, a special champion: everything was decided in the match, the format of which was chosen 3 hours before the whistle
Danny rose: I was stopped by the police last week: is This a stolen car? Where did you get it?. And this happens regularly
Barcelona refused to sell for 60 million euros Trinca u, bought from Braga for 31 million. The club count on him
Chelsea will compete with Everton for Regilon. Real Madrid is ready to sell him
Source https://www.freemalaysiatoday.com/category/nation/2020/07/11/sarawak-records-covid-19-death-new-infection/

The Weeknd to hold augmented-reality concert on TikTok

Manhattan DA probing Trump and his business for ‘criminal conduct’

China to retaliate if US forces out Chinese journalists, says Global Times editor

Fed policymakers call for fiscal support to save US economy

‘Living Art’: The inspired lives of 14 Malaysian artists and their creative practice

Prawn Mee and Loh Mee to die for at Lebuh Presgrave

Umno yet to withdraw suits against 7 MPs now in PPBM

Portia de Rossi speaks out as criticism of Ellen mounts

How to deal with fickle-minded clients

US TikTok star Addison Rae is launching a cosmetics line

Conte says he is committed to three-year project with Inter

Murray wants assurance on quarantine issues before US Open

MySejahtera app ‘a must for all businesses’

‘Onus is on every person’

Barriers set up to ensure distancing in Dewan Rakyat

Serie A season to kick off on Sept 19, a week later than planned

US teachers protest reopening of schools amid surging virus cases

US spells out changes for Boeing 737 MAX to fly again

India orders ‘full curfew’ in Kashmir ahead of clampdown anniversary

The toilet: The history of this underappreciated luxury

Why Dr M shouldn’t give advice on party-hopping

Check my bank accounts, says former Inanam rep over allegations that he was given millions to switch sides