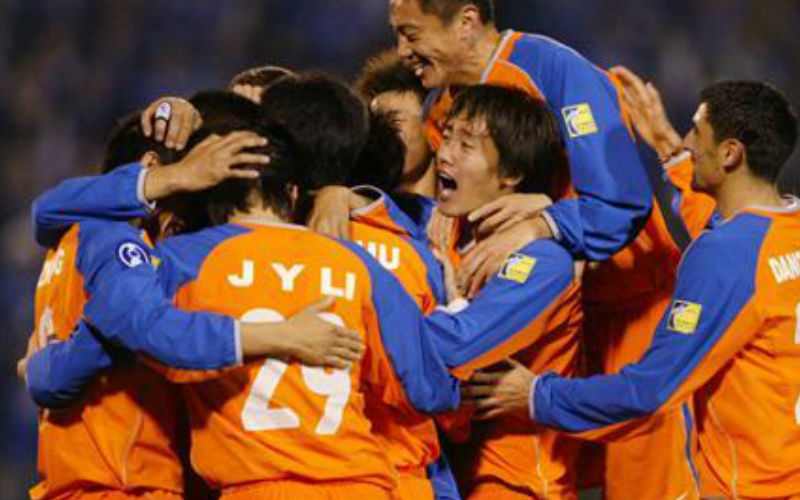 HONG KONG: Shandong Luneng coach Li Xiaopeng breathed a sigh of relief as his side ended a three-game losing streak with a 2-1 win over Guangzhou R&F on Sunday that keeps alive their hopes of landing a first Chinese Super League title since 2010.

“This is the kind of game where you feel the pressure,” said Li, who took over as Shandong head coach at the start of the season.

“Thanks to the players for their effort. Everyone was striving to win and it has put us on a good path for the final phase of the league.”

Former Southampton striker Pelle put Shandong in front after just 10 minutes with a delightful side-foot volley from seven metres out and Jin doubled his side’s lead eight minutes after the restart with a close-range finish.

Brazilian Renatinho pulled one back for R&F on the hour mark, but it was not enough to spark Dragan Stojković’s side into mounting a successful comeback.

Shandong trail leaders SIPG by five points after the Shanghai side returned to the summit on Friday.

Vitor Pereira’s side secured an emphatic 5-2 thrashing of Tianjin Teda that allowed them to capitalise on Beijing Guoan’s 1-0 loss to defending champions Guangzhou Evergrande.

Evergrande’s win, courtesy of a late goal from on-loan Brazilian striker Anderson Talisca, means one point separates the top three sides, with SIPG leading on 46 points with Guangzhou and Beijing both on 45.

SIPG and Evergrande have played one game fewer than the rest of the teams in the league after their meeting earlier in the season was postponed due to a typhoon, and their delayed fixture is due to be staged in Shanghai on Tuesday.

Elsewhere, Chris Coleman’s Hebei China Fortune continued their upswing in fortunes with a 2-0 win over Beijing Renhe that moved the Welshman’s team up to sixth, six points adrift of fifth placed Jiangsu Suning, who were held to a 1-1 draw by Shanghai Shenhua.

Second division champions Dalian Yifang continued their climb away from relegation trouble with a 1-0 win over Asian Champions League quarter-finalists Tianjin Quanjian. Bottom side Guizhou Zhicheng’s troubles deepened as a result of a 3-0 thrashing at the hands of Changchun Yatai.

Chongqing Lifan, meanwhile, had a solitary goal from Alan Kardec to thank for pulling them out of the relegation zone as they defeated Henan Jianye 1-0 to leapfrog the Zhengzhou-based club to move up into 14th place.

Sane did not pose in the number 10 shirt out of respect for Coutinho
Alvaro Morata: Atletico are close to the level of top clubs. We beat the best team in Europe to the Champions League
Sneijder can resume his career in Utrecht
Ole Gunnar sulscher: Greenwood is much better than I was when I was 18-19
Talalaev lit up the Wings in Khimki: the players called the coach Klopp, and themselves-Liverpool from the FNL
Rummenigge on buying out Perisic from Inter: Bayern haven't decided yet
Director of Tambov that Melkadze will not play with Spartak: we do not have a free 3-5 million rubles
Source https://www.freemalaysiatoday.com/category/sports/2018/09/17/shandong-snap-losing-streak-to-stay-in-csl-hunt/

All Covid-19 tests in Formula One have been negative

Shell CEO does not rule out moving headquarters to Britain

Covid-19: Perak traders advised to obtain licence to get back to business

After being sacked from PKR, Sg Acheh rep Zulkifli Ibrahim to support PN

Never my intention to keep Putrajaya in the dark over Chinese workers, says Shafie

By early 2021, 200 parcel lockers to be set up islandwide in Singapore — a year ahead of schedule

Senior minister: 47 test positive for Covid-19 at KLIA since June 10

Covid-19: Singapore cinemas to reopen from July 13 after being closed since late March

No pressure from Selangor MB to quit as exco, says Haniza

Statistics Dept: Census 2020 in two phases due to Covid-19 pandemic

Single mum dreams of an education for ailing child

We don’t give games as Christmas presents, Klopp warns kids

US sends carriers to South China Sea during Chinese drills

N.Korea says it feels no need to sit down with US for talks

N.Korea says no need to sit down with US for talks

Chini by-election: Living in interior no barrier to voting for Orang Asli

Apple Card owners can now make payments on their computer, too

Bursa Malaysia to trade in tandem with regional markets next week

WHO says first alerted to virus by its office, not China