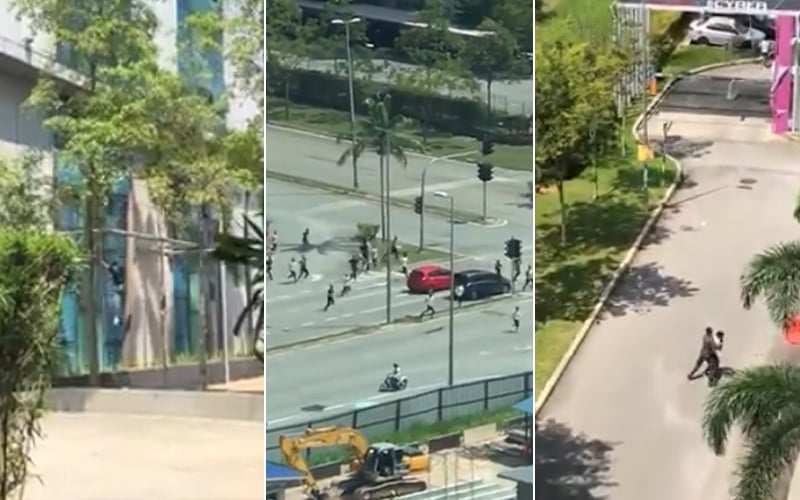 People seen jumping off the second floor of a building in Cyberjaya and others running away to escape an immigration raid which netted 680 scammers from China in Cyberjaya on Wednesday.

KUCHING: A Sarawak assemblyman has urged the state government to enhance its immigration intelligence to boost the state’s security.

Muara Tuang assemblyman Idris Buang said cybersecurity, in particular, is important to help the state government in its plans to further develop the state.

“It is important to augment our own immigration intelligence to complement the police and Immigration Department in monitoring those who are likely to abuse their entry permits.

“This includes illegal immigrants who could pose a grave threat to our state security, using their expertise in technology applications or other unfamiliar modus operandi,” he said in a statement here today.

He said the arrest of 680 scammers from China in Cyberjaya on Wednesday should be an eye-opener to all and it is feared that Sarawak could be the next target of such online scam syndicates.

If such threats materialise, it could cause huge losses, not only to our economy and businesses, but also in terms of the state’s security, he added.

Therefore, he urged the state government to strengthen the relevant departments in the state with the right training and system upgrades for safety, along with tighter immigration checks.

Sabah wants to manage own food stockpile during Covid-19 crisis

Price we pay for not preserving forests

Cannavaro urges Italy to summon spirit of 2006 to beat coronavirus

Worldwide lockdown intensify as Spain sees yet another deadliest day

US coronavirus deaths reach 3,393, exceeding death toll in China, according to Reuters tally

Lockdowns may have saved 59,000 lives in Europe, says study

Mickelson ‘working on’ 1-on-1 golf rematch with Tiger

Dzulkefly: Tabligh attendees slow to step forward due to lack of symptoms, not distrust

How Parliaments function in time of crisis — Fakhrurrazi Rashid

US Army Corps to build hundreds of temporary Covid-19 hospitals

Coronavirus death toll in Italy’s Lombardy rises by around 381 in a day, says source

Covid-19: Is a homemade face mask better than nothing at all?

Federer wows fans on Twitter with video of trick shots

Catch a glimpse of the US Legend Car

Corolla Altis: A Beemer in disguise?

A fun day at the MINI track

2020 Bezza: The pick for practical use

Coronavirus may kill, but so does hunger, says Brazil’s Bolsonaro

Classic Chatter: Time to get a Holden

Classic Chatter: Even the mighty can fall

No masks, so suspect brought to court with garbage bag over head

Classic Chatter: When BMW stole its own trademark

183 charged with going against stay at home order in Penang

Those hiding people linked to Covid-19 clusters could face action