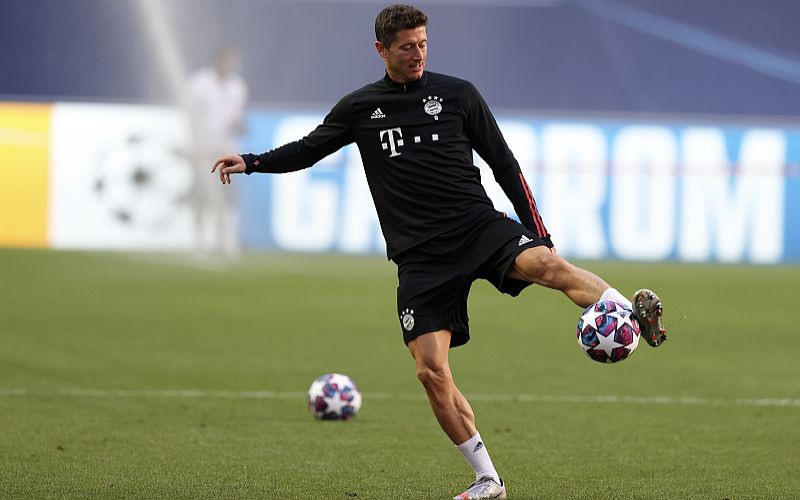 Bayern’s Robert Lewandowski plays with a ball during a training session at the Luz stadium in Lisbon on Thursday. (AP pic)

Barca face Bayern at the Estadio da Luz for a place in next Wednesday’s semifinal.

In the build-up, there has been much debate whether Lewandowski, the Champions League’s top-scorer with 13 goals in seven games, or six-time Ballon d’Or winner Messi is the better player.

“Robert is absolutely world-class as a central striker.

“He has a lot of quality, especially in the penalty area, he guarantees goals and creates them too.

“Messi has been by far the best player (in the world) for many years.

“I don’t know whether there will be a player like him again.”

Lewandowski is enjoying the best season of his career so far with 53 goals in 44 games, while Messi has managed 31 in 43 matches.

However, treble-chasing Bayern need to come up with a plan on how to contain Messi.

“You never defend against him alone. In the (previous Bayern) games against Messi, it always worked well when the whole team played their part,” said Bayern forward Thomas Mueller.

“If the first player doesn’t win the ball (from Messi), the next comes and tries.

“We have to act together, go into the challenges aggressively, but cleanly.

“It will be exciting, but in our games in the last few weeks, we have shown that we can do it,” he added with Bayern unbeaten in their 13 matches since the restart.

Flick insists Friday’s showdown is not “Bayern against Messi. Of course, he’s a world-class player and we have thought about how to play against him.

“We have to be there as a team, be smart and put pressure on him.”

Bayern are chasing the treble after winning an eighth straight Bundesliga title and lifting the German Cup.

In contrast, Barcelona surrendered the Spanish title to Real Madrid after winning only seven of their 11 matches since the Spanish league resumed.

Nevertheless, Barcelona’s former Bayern midfielder Arturo Vidal has insisted the Spanish giants are “the best team in the world”.

The Germans resisted making a similar boast, but are in confident mood, even if Flick refused to make his team the favourite.

“Both teams have tremendous quality,” he said.

“When such top clubs meet, even a bit of luck can be decisive.

“We have to believe in ourselves, act confidently and with the necessary intensity going into this game.”

Barcelona's Interest in Isak Increased after Koeman's appointment. Larsson has a high opinion of the player (Mundo Seportivo)
Manuel Pellegrini: When you play against Real Madrid and var, it's too much
PSV and Porto are Interested in Barcelona midfielder PUC. He doesn't want to leave the club
Puyol about Barcelona: If we want to win the championship, we need to perform very well
Schalke sacked Wagner. The team has not won the Bundesliga since January
Iacini on 3:4 with Inter: Even a draw would be an unfair result, given how many chances Fiorentina created
Ramos Pro 3:2 with Betis: the Referee tried his best and didn't do anything intentionally
Source https://www.freemalaysiatoday.com/category/sports/2020/08/14/you-cant-compare-lewandowski-and-messi-says-bayern-boss-flick/

In Johor, father of three gets two years’ jail for abusing son

Huawei exec to accuse US of misleading Canada in extradition case

Hajiji confident of being sworn in as Sabah CM tomorrow, says ‘no more problems’ over his candidacy

Singapore lawyer who pocketed S$32,000 in legal fees from 15 clients gets more than two years’ jail

Players could compete while in quarantine, says Australian Open boss

Construction of Kelantan Sukma facilities to commence next year

MySejahtera’s Covid-19 Hotspot Tracker not only based on infections, Health Ministry clarifies

New Sabah CM to be sworn in tomorrow

Ringgit steady vs US dollar at opening, trade data in focus

In Paris, a fashion eco-system on edge as shows disappear

In first Biden-Trump debate, a show with limited prospects for impact

Allowing Warisan to form govt would be ‘interference’ from governor, says lawyer

How Covid-19 has spread across the world

US dollar near two-month high as investors look to more data, US political developments