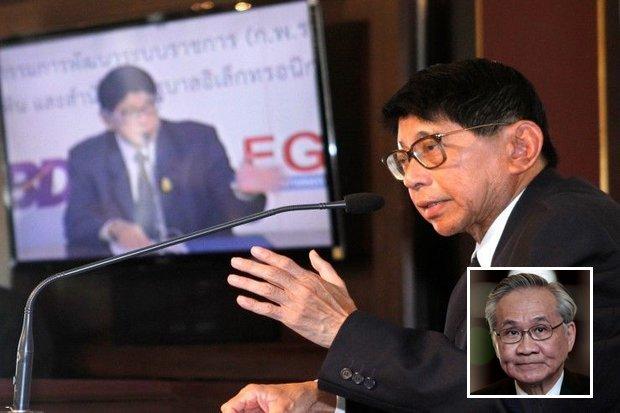 Deputy Prime Minister Wissanu Krea-ngam, the ranking legal expert in the cabinet, says there is no reason for Foreign Minister Don Pramudwinai (inset) to step down over an anti-corruption regulation - yet. (Bangkok Post file photo)

Minister of Foreign Affairs Don Pramudwinai will not yet have to give up his post despite the ongoing controversy surrounding his wife's shareholdings.

However, if the court disqualifies Mr Don, he will lose his ministerial position and will not be able to return to the cabinet for two years, according to the constitution, Mr Wissanu added.

Election Commission (EC) member, Boonsong Noisophon, said the official ruling of the EC will be submitted to the Constitutional Court next week.

The issue was raised by Ruangkrai Leekitwattana, a legal adviser to the Pheu Thai Party, who filed a petition last year demanding an investigation into the shareholdings of nine cabinet ministers. The EC looked into the cases and cleared eight of the ministers.

According to reports, the EC voted 3:2 against clearing Mr Don after learning that his wife had not disclosed her 5% share in a private company. Section 187 of the 2017 charter prohibits a minister or his spouse from holding shares.

If a cabinet minister, or spouse, wants to continue receiving benefits from the stockholding, he must inform the NACC president within 30 days of starting in the job.

However, Mr Don took up his post before the promulgation of the current charter.

These stockholdings are shares that his wife inherited from her father 37 years ago. They are unlisted on the Stock Exchange of Thailand and stockholders consist of 6-7 relatives of his wife, the statement said.

"I am not [reshuffling the cabinet]. If he [a minister] can stay, then stay. If he can't, then go," he said before adding that he hasn't thought about shuffling anybody.

Zinedine Zidane: I would like VAR not to be used
Tottenham – Arsenal. Who will win: Mourinho or Arteta?
Zinedine Zidane: if the referee gives a penalty, it means it is a penalty
Lizard on the criticism of VAR: In Real life, they don't pay attention to conversations outside the team
Real need to score 5 points in 3 rounds to win La Liga
Gasperini about the 1/4 final of the Champions League: the Match with Juventus is an imitation of the games with PSG
Courtois played 18 dry games in the La Liga season. Real's record is one game away
Source https://www.bangkokpost.com/news/politics/1478889/foreign-minister-keeps-job-for-now

Quotas for returning Australians to be halved amid Melbourne outbreak