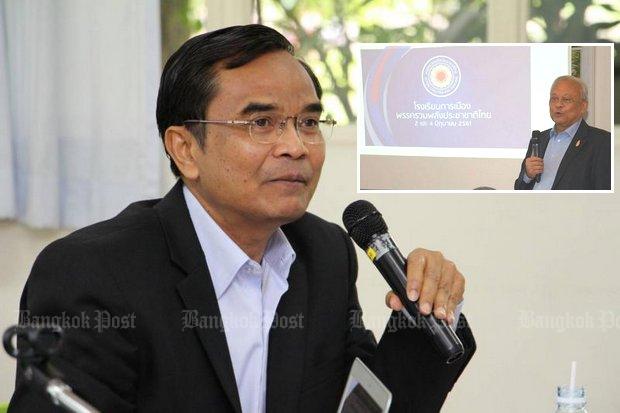 The emergence of the Action Coalition for Thailand (ACT) Party will not heavily affect the Democrat Party's standing in the next poll, particularly in light of the constituency system, but it may add some colour to politics, according to Deputy Democrat leader Nipit Intarasombat.

For example, in the previous poll, while some Democrat constituency candidates won 30,000 votes, the party gained up to 50,000 votes in the party-list system in those constituencies.

Mr Nipit also said the ACT Party may only aim to secure party list seats because it could not rival the Democrats for seats in constituencies in the southern provinces which are the Democrats' traditional stronghold.

"We'll look for new candidates. But I don't think it will be a tough competition because the Democrat's support base remains solid in Surat Thani and in other southern provinces.... We believe voters still have confidence in the party's reputation," Mr Nipit said.

Under the new voting system, a single ballot will be held for both constituency and party-list MPs. It mean votes cast for the losing constituency candidates will still be used to calculate the number of party-list seats, rather than being thrown away under the old first-past-the-post system.

Under the new system, candidates who win the most votes in each constituency will still automatically become members of parliament, while the parties of unsuccessful candidates would still have a chance of securing a party-list seat in parliament.

Mr Suthep, former secretary-general of the defunct People's Democratic Reform Committee street protests, admitted on Sunday he was reneging on his pledge to exit politics by accepting a position as a recruiter and fund-raiser for the ACT.

Declaring that Mr Suthep -- a former secretary-general of the Democrat Party and long-time MP for Surat Thani -- would not take any party executive or political position should the party win the election, Anek Laothamatas, who has been tipped as a promising candidate for the ACT, said Mr Suthep's position was important.

The party said a general assembly to choose its executives would be held within the next three months. In the meantime it will recruit members and raise funds for the party.

He said he was glad all sides would be working together but declined to comment on whether the ACT Party was designed to support Prime Minister Prayut Chan-o-cha's potential return.

Ole Gunnar Solskjaer: I Think it was a penalty against Aston Villa
Philadelphia played in t-shirts with the names of black people who died at the hands of the police
Kompany tries everything at Anderlecht: he coached without a license (terrible), played 15 matches and invested 3 million euros in the club
Aston Villa coach on Manchester United penalty: A shameful decision
Paul Pogba: Winning the Europa League and the FA Cup are two of Manchester United's goals for this season
Manchester United's first ever Premier League win 4 consecutive games with a difference at least 3 goals
Brunu has scored 7 (4+3) points in his last 3 games for Manchester United
Source https://www.bangkokpost.com/news/politics/1478909/nipit-says-act-no-threat-to-democrats

IPOs to revive in second half

US pledges to help deter trafficking