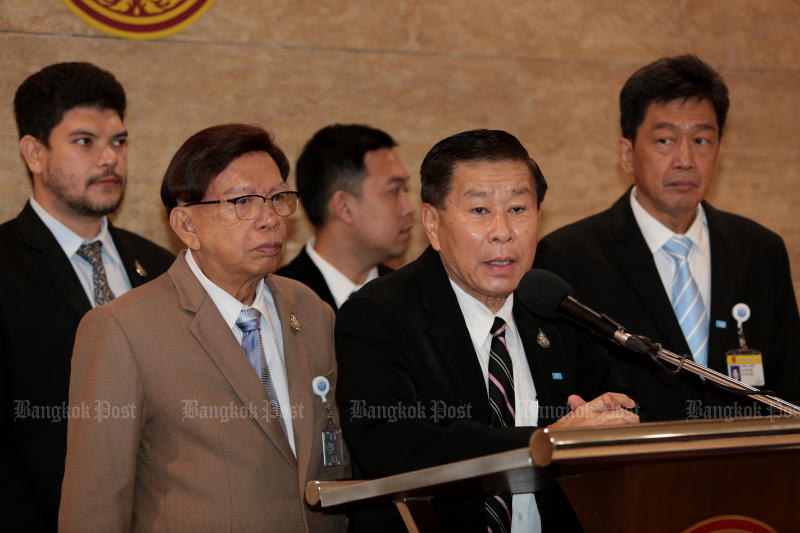 Pol Gen Sereepisuth is chairman of the House Anti-Corruption and Misconduct Committee. The lawsuit related to his demand that Prime Minister Prayut Chan-o-cha appear before the committee to answer questions about his failure to recite the complete oath of office during his swearing-in.

The lawsuit stated that on Jan 13 this year Mr Sira gave a media interview during which remarks he made could be construed as accusing Pol Gen Sereepisuth of intending to cause disruption for his own political gain. The interview was broadcast on website www.nationtv.com and Nation TV Channel 22.

Pol Gen Sereepisuth accused Mr Sira and Nation Broadcasting of ruining his reputation. He asked the court to punish them according to the law.

Only lawyers for the two sides showed up to hear the court's decision..

The court ruled that Mr Sira, in giving the interview, only voiced his disagreement with the plaintiff's demand, citing the Constitutional Court's refusal to consider the issue.

Nation Broadcasting was only performing its duty as part of the mass media, the court said.

The court ordered the case be dismissed.

Tiago Pro 8:2 with Barca: Bayern haven't won anything yet
Bartomeu's future in Barcelona will be discussed by the Board of Directors next week
CSKA is ready to offer 7 million euros for defender Fuchs. Internacional wants 10 million^. CSKA intends to acquire the Central defender of Internacional Bruno Fuchs, who is also claimed by Monaco and Lille
Goretska Pro 8:2 with Barca: This is only the first of three steps
Matteus on the defeat of Barca: it is Painful to see what happened to the team that inspired us for so many years
Bartomeu met with Pochettino this week. He could replace Sethien at Barca
Salihamijic Pro 8:2 with Barca: Bayern are very happy, but they want more
Source https://www.bangkokpost.com/thailand/general/1950652/sereepisuths-lawsuit-against-sira-dismissed

Online IT sales on pace to make up 40% of market

Thailand is on top of the tourism shopping list for Asian travellers, when the borders open