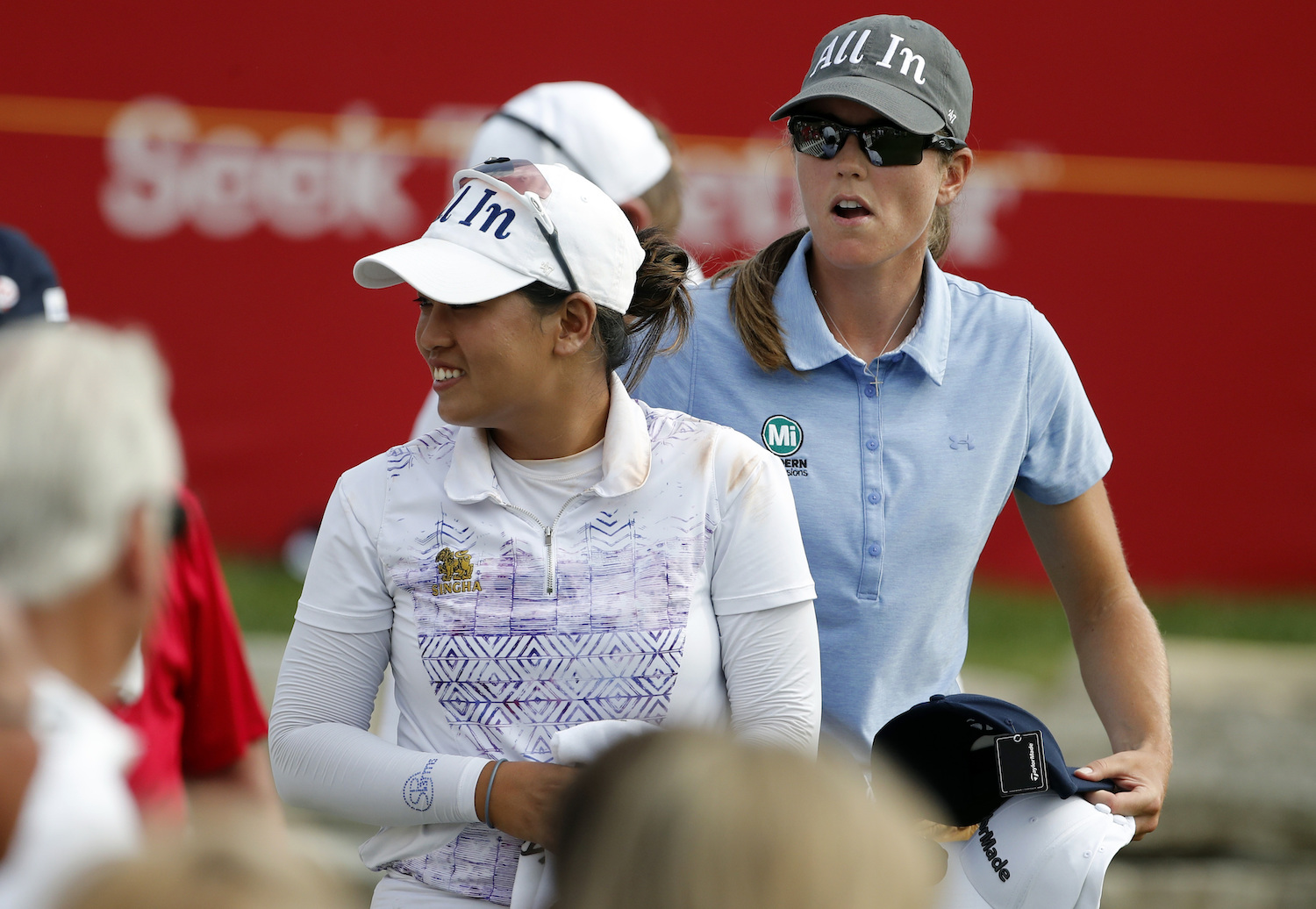 Jasmine Suwannapura (left) and teammate Cydney Clanton hand out caps to fans as they walk off the 18th tee during the third round of the Dow Great Lakes Bay Invitational golf tournament on Friday in Midland, Michigan. (AP Photo)

MIDLAND, Michigan: Three of the top four names on the leaderboard are Thai heading into the final round of the Dow Great Lakes Bay Invitational, a new two-player team event on the LPGA Tour.

Jasmine (Thidapa) Suwannapura of Thailand and her American playing partner Cydney Clanton shot a 7-under-par 63 in alternate-shot play on Friday to open a five-stroke lead.

Sisters Ariya and Moriya Jutanugarn had a 64 to move into a tie for second place at 11 under with Simin Feng and Ruixin Liu (67), Na Yeon Choi and Jenny Shin (67) and Paula Creamer and Morgan Pressel (69).

Clanton and Suwannapura birdied five of the last seven holes on the front nine and played the last five holes in 2 under, making three birdies and a bogey.

“I think because we were pretty chill, like ‘You hit a bad shot, okay, I’ll fix it, don’t worry,’” Jasmine said of the pair’s third-round success. “So everybody was kind of like relaxing the game today, so the result was pretty good.”

The duo had a 16-under total of 194 at the Midland Country Club, with a best-ball round left on Saturday.

“Each hole is an opportunity,” Clanton said. “How many opportunities can we give ourselves? It’s one of those things where as many fairways and greens as you can hit, and if the putts go in, great.”

Jasmine won the Marathon Classic last year for her lone LPGA Tour title. Clanton is winless on the tour. They had an alternate-shot 67 on Wednesday and shot a best-ball 64 on Thursday.

“Today, I think what we did was quite impressive just with our ball-striking in general,” Clanton said. “Jasmine’s putting’s on point. I think you’ve just got to look at it as it’s just another opportunity to play and the more that you can think of the fact that it’s just another day on the golf course, we’re going to go out and try to do what we’ve been doing, the better it’s going to be.”

Ariya said she and her sister were more relaxed during their third round and the results showed.

“I felt like in the first round, I don’t want to miss any shots because I don’t want my sister to have a tough shot and I was kind of worried and scared,” Ariya said. “But today we already made the cut and we had nothing to lose, so we just kept playing golf.”

Christophe Dugarry: Messi really could have given Griezmann more passes. Antoine lost confidence
Sane passed a medical for Bayern and went to meet with the club's management
Neuer - in goal, Hakimi and Davies burn out the flanks, in front-Sancho, Muller and Lewandowski. Collected Dreamtime Bundesliga-19/20
Casillas is almost not on the video in honor of Spain's victory at Euro 2012. Perhaps this is due to his promotion to the post of President of the FFI
Setien's future in Barca is under threat. The players don't support it
Trent on motivation: Ronaldo and Messi never relax. The more you win, the more you want to continue
Conte on criticism: attack me, Not the club or my players. There are people who want to see the glass half empty
Source https://www.bangkokpost.com/sports/1715879/thais-crowd-top-of-lpga-leaderboard