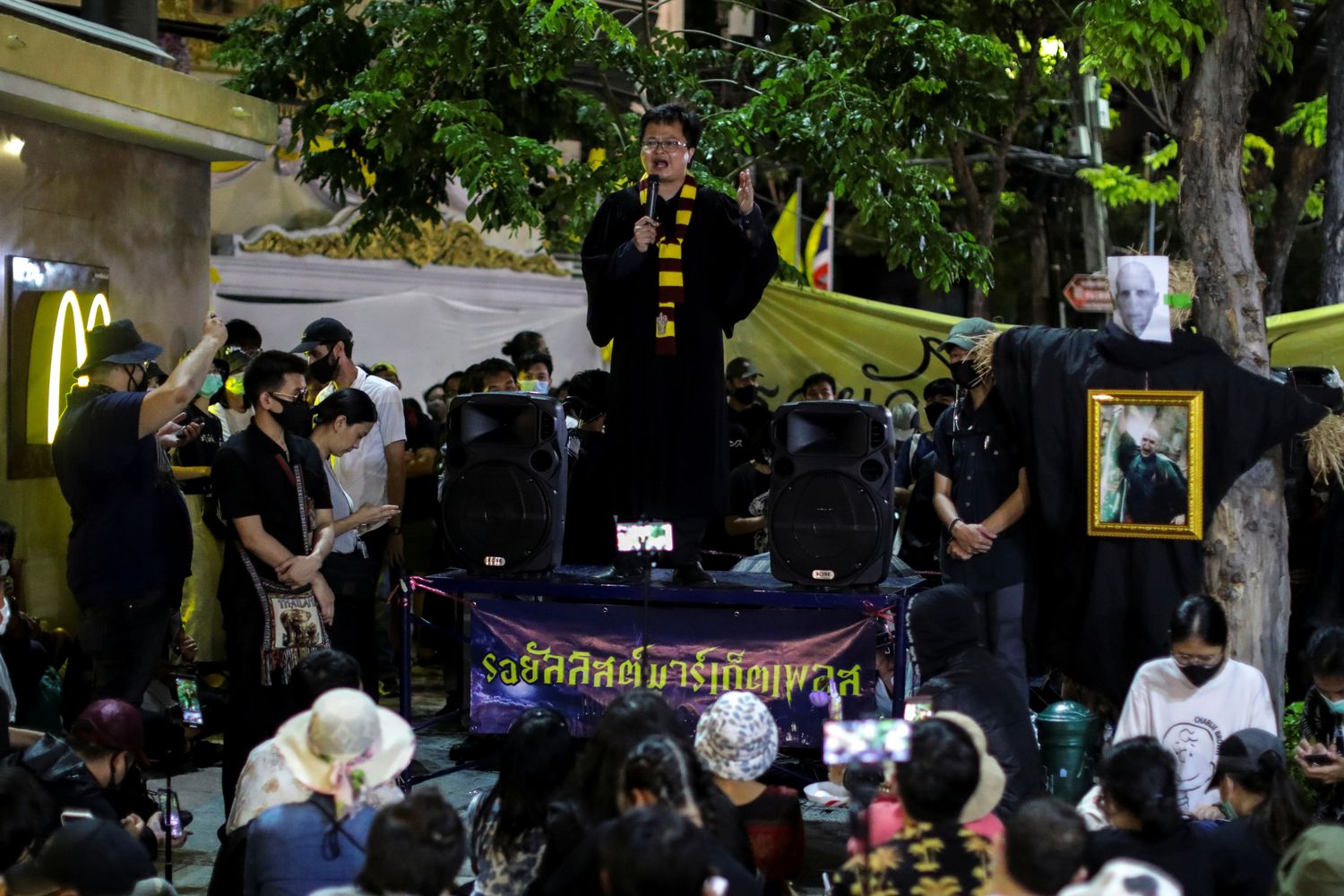 Anon Nampa, dressed as a wizard, speaks during a Harry Porter-themed protest demanding the resignation of Prime Minister Prayut Chan-o-cha in Bangkok on Monday. (Reuters photo)

The Free People group has called for an urgent rally at the Bang Khen police station on Friday evening after human rights lawyer Anon Nampa was arrested in the afternoon.

Mr Anon, who has represented several pro-democracy activists in the past, was the first to be whisked away by police to Samran Rat police station in Bangkok. After he signed documents acknowledging the charges he was sent to the Bang Khen police station.

He posted a picture of the arrest warrant on his Facebook page after police confronted him around 2pm in front of his condominium in Bangkok.

“Anon can only be detained no more than 48 hours before he has to be produced to the court. Then, he will likely seek bail,” the head of Thai Lawyers for Human Rights, Yaowalak Anuphan, told Reuters.

The charge under Section 116 carries a maximum penalty of seven years in prison.

Minutes later, Panupong Jaadnok, known as “Mike Rayong”, one of the young people who held posters denouncing Gen Prayut Chan-o-cha when the prime minister visited his hometown Rayong, was taken by police from the Ramkhamhaeng area to the same police station. He is named as the seventh suspect in the same case and faces the same charges. The names of the others are not known yet.

Parit “Penguin” Cheewarak, a student activist at Thammasat University, also posted on Facebook that he had received an arrest warrant but was not in custody. He pledged to use peaceful disobedience because he thinks his arrest was illegitimate.

The arrests come just days after the inauguration of the Free People group, which grew out of the Free Youth group that has staged protests across the country over the past three weeks.

The protesters, mainly university and high school studnts mobilised via Twitter and other social media, have been demanding the resignation of the current government, an end to state harassment of government critics, and a new constitution.

Gen Prayut has said that efforts to change the charter will go ahead but he has also asked the protesters to tread carefully.

The Free People group has called for another rally on Aug 16. Mr Anon said earlier that he was planning to speak at a related rally on Sunday in Chiang Mai.

Mr Anon created a stir when he gave a speech at a rally near the Democracy Monument on Tuesday. In it, he touched on the relationship between the monarchy and the constitution.

As the first person to have spoken in public about the highly sensitive issue in several years, he insisted he meant well for the high institution, which he thinks needs to be within the framework of democracy with the King as head of state.

He made three proposals: abolish or amend laws expanding royal power which may infringe on the principles of democracy with the king as head of state; amend the lese majeste law in line with democracy and human rights; listen to the voice of rallying students and the public in order to arrive at solutions to social problems based on democratic principles.

SURAT THANI: The body of a woman missing since a ferry sank off Koh Samui on Saturday night was found on Friday, bringing the confirmed death toll to three. Two people were still missing. 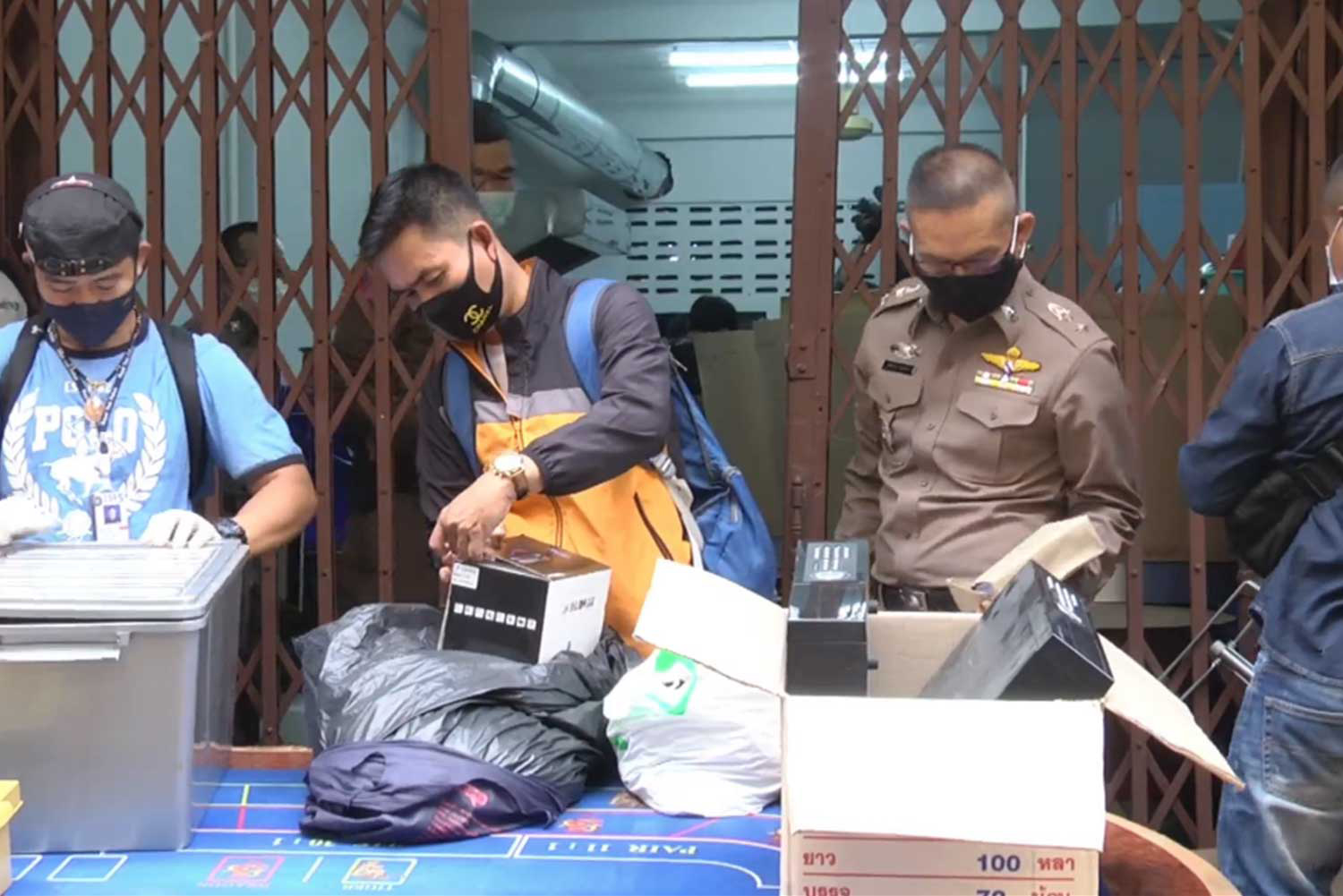 Barcelona's Interest in Isak Increased after Koeman's appointment. Larsson has a high opinion of the player (Mundo Seportivo)
Manuel Pellegrini: When you play against Real Madrid and var, it's too much
PSV and Porto are Interested in Barcelona midfielder PUC. He doesn't want to leave the club
Puyol about Barcelona: If we want to win the championship, we need to perform very well
Schalke sacked Wagner. The team has not won the Bundesliga since January
Iacini on 3:4 with Inter: Even a draw would be an unfair result, given how many chances Fiorentina created
Ramos Pro 3:2 with Betis: the Referee tried his best and didn't do anything intentionally
Source https://www.bangkokpost.com/thailand/politics/1964587/urgent-rally-called-after-outspoken-lawyers-arrest

No end in sight: Bangkok's flood problem to persist

7 business mistakes to avoid during a crisis

THAILAND SMILES WITH YOU ส่งกำลังใจให้คนไทยผ่านกีฬาฟุตบอล

One’s heart is in one’s mouth