US jobless claims worse than forecast

US jobless claims worse than forecast 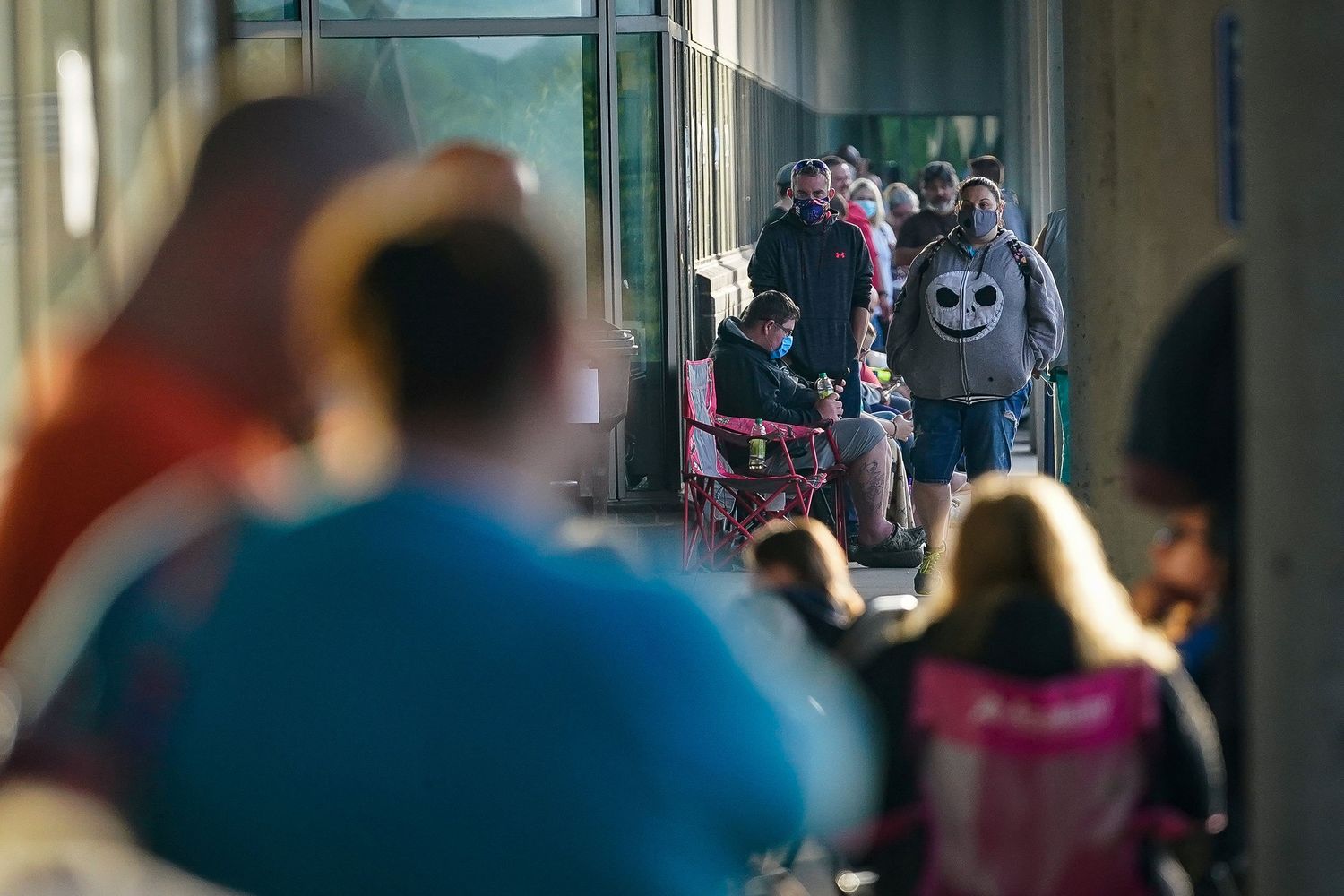 People line up outside Kentucky Career Center prior to its opening to find assistance with their unemployment claims in Frankfort, Kentucky, on Thursday. (Reuters photo)

Applications for unemployment benefits in the US fell less than forecast last week, showing only gradual improvement from the worst of the pandemic-related layoffs even as states re-open more of their economies.

Initial jobless claims for regular state programmes totalled 1.51 million in the week ended June 13, down slightly from an upwardly revised 1.57 million in the prior week, Labor Department figures showed Thursday.

Applications have exceeded a once-unthinkable 1 million on a weekly basis since mid-March. The median estimate in a Bloomberg survey of economists called for 1.29 million initial claims in the latest week.

Continuing claims — the total number of Americans claiming ongoing unemployment benefits in state programmes — decreased to 20.5 million in the week ended June 6, compared with a median projection of 19.9 million. Those figures are reported with a one-week lag.

Given the unprecedented surge of claims in recent months, many economists look to the non-seasonally adjusted figures for a more accurate read on claims. Unadjusted continuing claims actually climbed by almost 26,000 to 18.7 million. Unadjusted initial claims dropped by more than 128,000 last week, compared with the seasonally adjusted 58,000 decline.

By several metrics, the economy has rebounded at a faster pace than many anticipated. Payrolls at companies increased by several million in May and consumer spending on cars, restaurant meals and more soared last month, exceeding expectations as states loosened restrictions. But the jobless claims data remain a glaring blemish that shows churn and volatility in a labour market that entered the year in solid shape.

Federal Reserve chair Jerome Powell underscored this dichotomy to lawmakers Tuesday when he said, “We would expect to see large numbers of people during this period coming back to work during this second period — call it the bounce back or the beginning of the recovery,” Mr Powell said. “Then we think, and I think most if not all forecasters think, that will leave us well short of where we were in February.”

Griezmann suffered the first muscle injury of his career. Earlier, Barca players were dissatisfied with the medical staff
Barcelona will lose 100 million euros due to the coronavirus. The club expected to make 200 million euros in profit
Police have opened a case against Ronaldo's 10-year-old son. He was self-driving a jet ski (The Sun)
Lampard on the cancellation of city's ban: I Never hoped that an extra team would get into the Champions League
Thibaut Courtois: to take the title, you have to suffer. It is not easy to win every match
Antonio Conte: I will not hesitate before leaving if Inter are not happy with what I am doing
Diego Godin: Inter will do everything to keep second place. Now we need to think about how to catch up with Juventus
Source https://www.bangkokpost.com/world/1937168/us-jobless-claims-worse-than-forecast

Coming Soon : Energy for All

All Day Dining and More! คอนเซ็ปต์โดนใจให้อิ่มอร่อยหลากเมนูเช้าจรดค่ำจาก THE COFFEE CLUB

400 people in Rayong being traced, schools closed down, Government apologises

Singapore drops into an official recession

Daughter of Sudanese diplomat tests positive for Covid-19 in Bangkok

Malian jihadist on trial at ICC over Timbuktu destruction