New agreements build on those Morocco and Rwanda established after the inauguration of the Rwandan Embassy in Rabat in January.

Rabat – Morocco and Rwanda aim to consolidate their growing relations with the signing of two new cooperation agreements in Rabat on Friday. 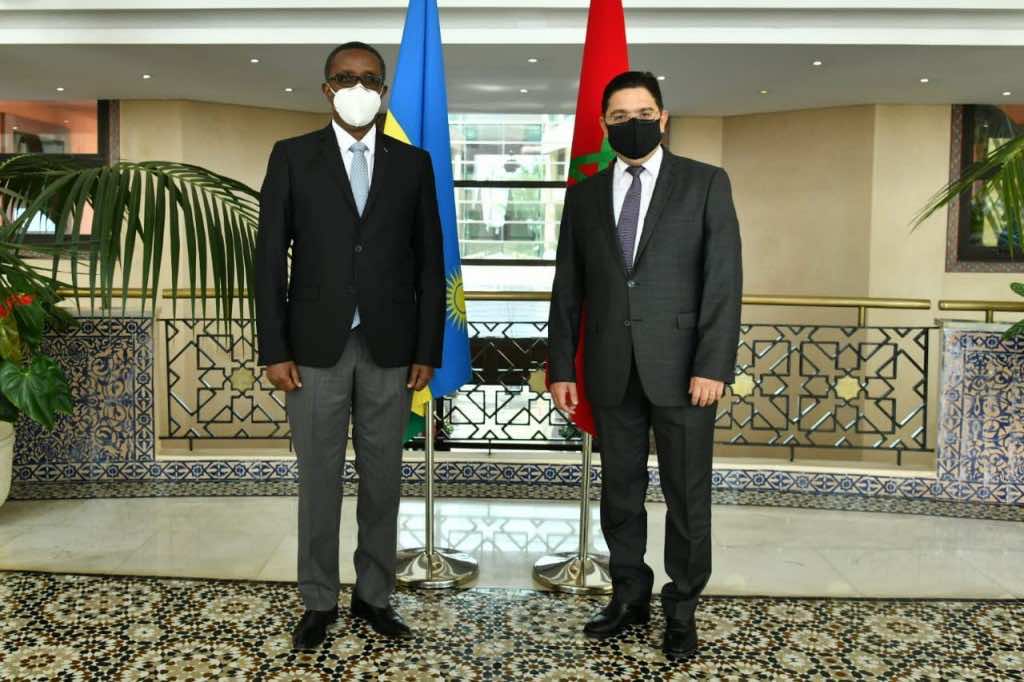 The two officials held discussions on how to strengthen bilateral cooperation and proceeded to sign two Memoranda of Understanding (MoU) to further improve ties between their countries.

One of the agreements aims to create a steering committee to monitor cooperation between the Moroccan and Rwandan governments.

Under the MoU, the steering committee will be responsible for evaluating the implementation of decisions and recommendations of the bilateral cooperation monitoring committee Morocco and Rwanda established in January. The two countries created the monitoring committee ahead of the opening of the Rwandan Embassy in Rabat on January 15.

The new steering committee will also oversee bilateral meetings between senior officials from the two countries.

Bourita and Biruta also signed an MoU to define modalities of cooperation in sports.

The two foreign ministers expressed satisfaction with Morocco and Rwanda’s shared outlook on issues of common interest such as peace and security in Africa, South-South cooperation, food security, other aspects of sustainable development, and reform of the African Union (AU).

Morocco and Rwanda formally established diplomatic ties in 2017 and Morocco opened its embassy in Kigali in April of the same year.

The establishment of ties came after King Mohammed VI visited Rwandan President Paul Kagame in 2016. Kagame was one of the African leaders who welcomed Morocco’s return to the AU in 2017.

Since 2017, Morocco and Rwanda have signed more than 30 cooperation agreements spanning several sectors including the agro-industry, the pharmaceutical industry, and the financial sector. Twenty-three agreements followed the inauguration of the Rwandan Embassy in Rabat.

The two African nations’ priority is strong cooperation in fields relating to peace and security in the Sahel and Great Lakes regions and across the continent. Rwanda also supports Morocco’s territorial integrity and sovereignty over Western Sahara.

Jordan Henderson: I would prefer to play without VAR. All the time we talk about individual episodes, not about football
Antonio Conte: People can't wait to vent their negativity on Inter. We must close ourselves off from those who want to throw mud at us or something worse
Simeone wants to sign Soler at Atletico. The midfielder scored 3 goals for Real Madrid from the penalty spot in November
Ferran Torres scored for Manchester City in the Premier League for the first time. He scored a hat-trick against Germany last week
Marez scored a hat-trick for the first time since 2015. The Manchester City midfielder has scored three times for Burnley
Klopp to the Premier League broadcaster about Milner's injury: What a surprise. Congratulations. Playing on Wednesday and then on Saturday at 12:30 is very dangerous for players
Manchester United faces a fine of up to 15 million pounds if the club pays hackers
Source https://www.moroccoworldnews.com/2020/10/324257/morocco-rwanda-to-boost-bilateral-ties-establish-cooperation-in-sports/

Morocco’s Ministry of Culture to Boost Investment Budget in 2021