‘We Are Broken’: 6 Dogs Killed in Attack on Morocco Animal Aid

An animal welfare association in Agadir is at odds with neighbors who are fed up with constant dog barking.

An unidentified perpetrator killed six rescued dogs and poisoned a dozen more on Saturday in an attack on Morocco Animal Aid (MAA), an animal welfare association and community project in Agadir.

The dogs were healthy former strays, neutered and vaccinated by MAA and living at the association’s rented property in the town of Asserssif.

Photos and video footage from the scene are graphic.

Corinna Lein, the general manager at MAA, told Morocco World News on Monday that two of the dogs who died after eating poisoned meat had adoptive homes waiting for them.

Saturday’s attack was the latest manifestation of an ongoing campaign against Morocco Animal Aid.

The association, located in a residential area, has experienced tension with several neighbors who are fed up with the dogs’ constant barking. Corinna explained that Morocco Animal Aid is well aware of the disturbance and began searching for more suitable land nearly two years ago.

“We came to this location as a much smaller rescue. It was enough space and we could move and isolate barkers to not annoy the neighbors,” she said. But as the organization expanded its activities, “we did not have much time to prioritize property.”

The group wants to relocate to an isolated plot of land in the Agadir region accessible to tourists with water and electricity, but have yet to find anything matching all their criteria.

Cohesion with the local community

“Despite what people say, Moroccans care a lot about animals,” Corinna told MWN.

“As Morocco Animal Aid grew, we got more calls every day to help sick or injured animals. Moroccans from all over the south and the country even called on us for support. There are many, many locals who support our project and rely on us to take care of the animals that live in and around their homes and businesses.”

“We are not a closed or isolated project,” she stressed. The association employs 17 local people and spends over €12,000 a month on supplies sourced from local small businesses.

Corinna added that the group works with tourism businesses, offering hikes in the mountains with the dogs, accepting day volunteers, and attracting visitors interested in animal welfare to nearby hotels.

Yet despite enjoying some local support, Morocco Animal Aid and its founder Lucy Austin have faced intense pressure from the neighborhood.

Corinna detailed to MWN a string of property violations and harassment that has targeted the association for months.

A vandal broke the windows of the MAA staff house, a neighbor twice cut the property’s fence and released dogs into the town, a dog was stabbed, and Lucy herself was physically assaulted.

In a video to document the second cutting of the property’s fence on September 20, Lucy described the ongoing conflict between MAA and its neighbors.

“We are under so much pressure,” the Australian national said, on the verge of tears.

“We’re doing a job that is not necessarily applauded by the general public. It’s absolutely warranted and needed as it’s keeping the community safe, but culturally, there is not a full understanding of what it means to be sterilizing and vaccinating dogs and cats … We know that we are running a community project, but the community as a whole isn’t yet aware that it’s for them. They just think we’re dirty dog people.”

One Asserssif resident organized a protest of the association on September 23. In a response on Facebook, Morocco Animal Aid implored the protestors to help the association find land for their relocation.

“In an effort to compromise, we teamed up with him [the protest leader] to rent some remote piece of land for our noisiest night barkers,” Corinna told MWN.

The organization intended the plot of land to be a temporary solution, but it ultimately failed to assuage tensions between MAA and Asserssif residents.

“The hatred [our neighbor] filled in the MAA campaign led a group of people to come over at night, stab a dog, scare the guardian for his life, and destroy the place entirely.”

For the past year, Morocco Animal Aid has faced local resistance from neighbors and other townspeople who are frustrated with the constant noise coming from the property.

“There are always two sides to a story,” one neighbor told MWN, speaking anonymously.

“I love animals and dogs very much,” he began. “Lucy is doing a great thing by caring for them.”

“What happened here is painful,” he continued, referring to Saturday’s attack. “I condemn these shameful acts.”

But Lucy is not “telling the whole truth,” he said.

The individual explained that while Lucy claims Morocco Animal Aid is the target of a select few angry neighbors, the reality is that more than 150 people in the area want the association gone.

“Twelve Europeans from France, Belgium, Poland, Denmark, and Switzerland. More than 140 Moroccans, with many children. Everyone signed seven petitions. No one can sleep anymore, there is no calm in the daytime. All day and night, we’re being terrorized by over 100 dogs barking,” the neighbor said.

The MAA founder has “no mercy for children and people,” he alleged. “A project that big must never take place in a residential area.”

“One hundred kids have trouble at school because they lack sleep and peace. And the family breadwinners working hard all day need rest in the evening and at night.”

Agnieszka Klech, a vocal critic of Morocco Animal Aid, also shared with MWN her perspective on the situation.

She condemned the attack on Saturday that left six dogs dead. “It’s disgusting what happened. I don’t know who did that and I wish I could know, I will be looking for the person who did that. It’s disgusting, it’s awful.”

Klech explained that she is an animal lover and works to care for animals in Morocco. But her gripe with MAA is that they are “not operating legally.”

The Polish national and direct neighbor of MAA’s rented property claimed there are four court cases pending against Lucy and her association. She alleged that MAA does not have the authorization to operate as an animal welfare organization or accept donations from abroad.

“They are fighting right now for their livelihood. They are living a nice life in a big house near the beach, they surf, they live for free, they have food for free, all because people are donating for the dogs,” she insisted, adding that this is why MAA has not left Asserssif.

Like the anonymous neighbor, Klech stressed that the campaign against Morocco Animal Aid is not confined to only a few people: “No one wants them in the middle of the village.”

She went on to say that MAA is not interested in dialogue with the locals. “They don’t talk with local people, they don’t listen to local people, who are tired. Old people, sick people, kids—they have to go to school in the morning but they cannot sleep in the night.”

Both critics and supporters of Morocco Animal Aid can agree that the horrific poisoning attack that killed six of the association’s dogs is inexcusable.

“We are facing a well-known situation that other associations have been facing, too,” MAA wrote on Facebook in the aftermath of Saturday’s attack. “It’s everybody’s struggle: the killing and abuse of the animals in Morocco.”

When news broke in November 2019 of an agreement between Morocco’s ministries of the interior, agriculture, and health and the National Veterinarians Authority to reduce the country’s stray dog population through sterilization rather than culling, activists around the country and the world rejoiced. But graphic reports of slaughter have continued to circulate local media outlets and social networks.

Morocco Animal Aid has experienced the death of its dogs in the past, but Saturday’s poisoning was the first deadly attack on the association’s rented property. The group believes that only through awareness can it seek justice for its slain animals and advance animal welfare in Morocco as a whole.

The association called on its followers to sign its petition and deploy the hashtag #stopkillingdogsinmorocco “until the noise of our general indignation becomes loud enough for the government to take action.”

“We are in here all together. Your fight is ours. These are your dogs. Let’s bring our voice together for another attempt for JUSTICE and ETHICS in Morocco.” 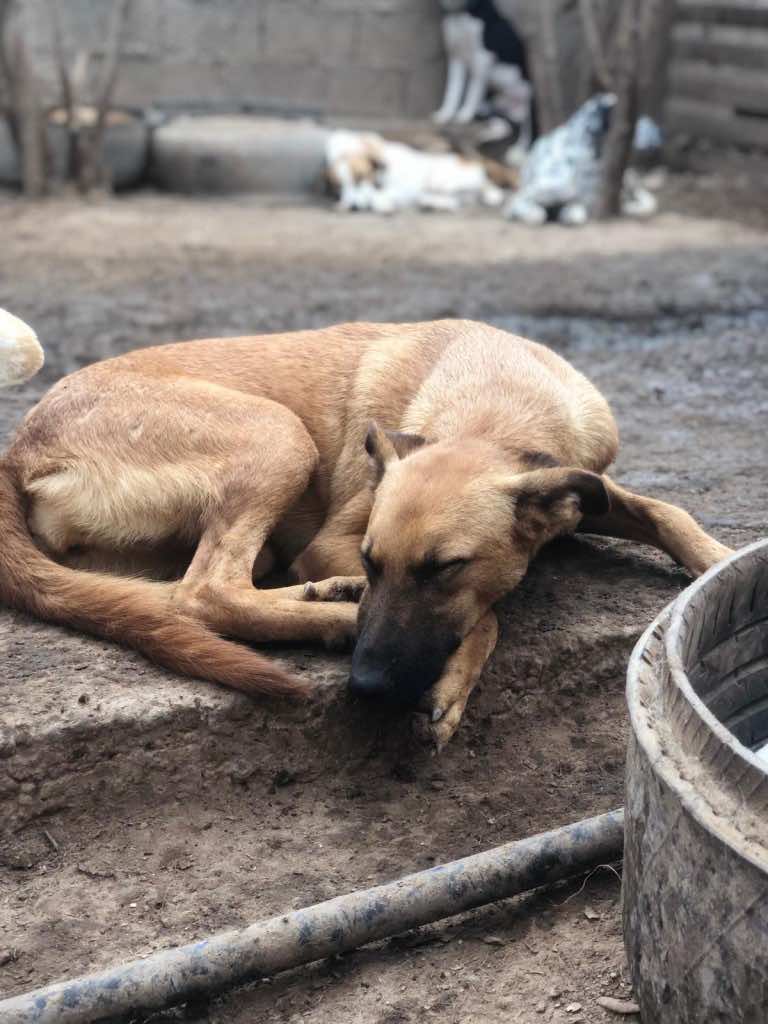 Ferguson on Rashford's charity: Fiction for a young man. He should give me some advice
A Preston player who twice touched an opponent's genitals was disqualified for 3 matches for aggressive behavior
Atalanta Director: everything is fine with Miranchuk, there are no symptoms of coronavirus
Kovid mocks the Latvian championship: the team got only 8 people (but still did not finish the match)
Gerard Pique: We all hope that Messi will stay at Barca
Agent of coronavirus from the Beginning: I feel fine. A test is a test
Barcelona has reached an agreement in principle with the players to reduce salaries. The club will save 122 million euros
Source https://www.moroccoworldnews.com/2020/10/323749/we-are-broken-6-dogs-killed-in-attack-on-morocco-animal-aid/

Colonialism and Conflict: Facts About the Map of Morocco

Expats Main Victims of Kuwait’s Budget Problems Ahead of Elections