Leighton Levy is a journalist with 28 years’ experience covering crime, entertainment, and sports. He joined the staff at SportsMax.TV as a content editor two years ago and is enjoying the experience of developing sports content and new ideas. At SportsMax.tv he is pursuing his true passion - sports. 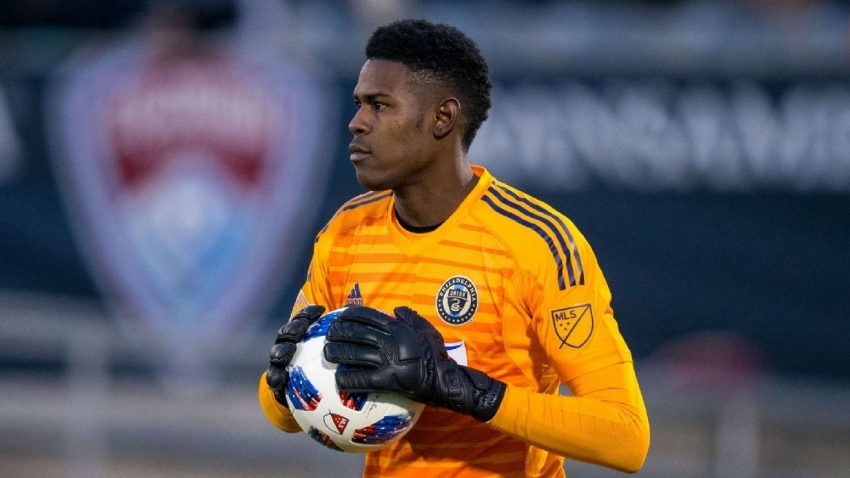 The Jamaica Football Federation (JFF) has offered its congratulations to Reggae Boyz Captain Andre Blake for having won the Golden Glove Award for the just-concluded MLS IS BACK Tournament.

The Philadelphia Union custodian led all goalkeepers in the MLS is Back Tournament with 32 saves, the most in the competition. This translated into him saving 86.5 per cent of shots at the Union goal, also best in the league.

Of Blake’s 32 saves, 19 of them came on shots from inside the penalty area.

Blake kept two clean sheets, a seven-save shutout of New York City FC in a 1-0 win in both teams' Group An opener, and a 1-0 shutout of the New England Revolution in the Round of 16.

According to the JFF, the performance is deserving of high praise.

“Any award received for outstanding performance in a tournament after a three-month lockdown must be seen through different eyes and must be highly respected,” the JFF said in a statement Thursday.

“Following a period when training would have been challenging, when interaction with fellow players would be highly restricted and there was less physical contact with coaches, only extraordinary personal discipline, determination and focus would allow a player to give outstanding performances ahead of his peers. Blake also received the Award for Save of the Tournament for the game Philadelphia Union vs New York City FC played on July 9.

“Andre Blake has always showed those characteristics throughout his playing career and the JFF is indeed proud that he will be leading the Qatar Motivated campaign of our Reggae Boyz in which these same characteristics plus his proven leadership qualities will be on display.”

PSG are in talks with Chelsea about Bakayoko. The Blues are ready to give the player on loan
The start time of the match Liverpool - Arsenal moved up 15 minutes early because of a curfew in England
Jose Mourinho: I'm tired of asking questions about Allie. 99% of the responsibility lies with the players. On me 1%
Werner admits he was doubtful about moving to Chelsea after the Bayern Munich defeat: I'd be lying if I said that it didn't happen
Messi and Neymar shared 4th place in the voting for the UEFA player of the season award, Ronaldo - 10th
Bayern are ready to offer Alaba a 5-year contract. Previously discussed a 4-year deal
Klopp, flick and Nagelsmann are up for the best coach of the season award
Source https://www.sportsmax.tv/index.php/football/regional/item/67957-jff-lauds-reggae-boyz-captain-mls-golden-glove-award-winner-andre-blake

Ministry of Foreign Affairs: Death of Judith Taylor in Canada

‘Help me save my beautiful boy’

SHAUNTAE IS KICKING UP A STORM

Supporting one another in the fight against cancer

Choose your goal - even it it's wanting a six-pack

EDITORIAL: Battling to hide documents is no sign of transparency

FACE TO FACE: Whatever happened to the Marquis of Nassau?

Young Woman Police Constable interdicted and placed on half pay after she expressed concerns on social media of sexual abuse by another officer up the ranks!

McAlpine: I'd vote no

Dames: We will catch the killers

PAHO reports more than 60,000 confirmed cases of COVID-19 in pregnant women, with 458 deaths

“Madusa” ask police if they head good after they arrested her son in Freeport on Friday!

AA Flight 3360 had to return to Miami after LPIA had no power this morning! WHAT IS THIS?

Jazz, Marlins in a battle to make the playoffs

Banker: Continued loan deferrals would be catastrophic for banks

Central Bank to facilitate redemption of pennies by weight next month

No repeat for large police funeral

Another House of Assembly staffer has virus

ALL HE WANTED WAS HIS BIRTHDAY PARTY: Reyes spent all day at homework – then was shot going out to play

Govt must hand over papers on shanty town demolitions

Brave men and women of the arm forces stop drug traffickers from escape! We only need to now know the nationality of the criminals…

WORLD VIEW: Has the time come for Caribbean republics?

INSIGHT: It's time people grew up and really throw themselves at this problem

EDITORIAL: We'll have more questions about the prison, Mr Murphy

British Colonial Hilton in downtown Nassau will not open in October!

Pamela Burnside: The Peril of the Power of One

MARINE BRANCH INTERCEPTS ILLEGAL VESSEL with 124 migrants onboard! THANK GOD FOR THE AMERICANS!

'Don't get hung up on October hotel return'

ActivTrades: The flights to nowhere

A child and two women murdered this bloody weekend…

Former M.P. Pierre Dupuch Comments on the Economy of The Bahamas!

Rodgers to be returned as BBA president

No Battle 4 Atlantis tournaments this year