LOS ANGELES—Two firefighters were “gravely injured” fighting a wildfire in Irvine, Calif., Monday as the region experiences dangerous fire weather that has contributed to fast-moving blazes that led to the evacuation of more than 100,000 residents.

The Los Angeles Times reported that the two firefighters were injured fighting the Silverado fire in Orange County.

The report said the firefighters are 26 and 31 years old and currently intubated at the Orange County Global Medical Center. The paper said the two suffered second and third-degree burns over half their bodies. It was not clear how the injuries occurred, the Associated Press reported. 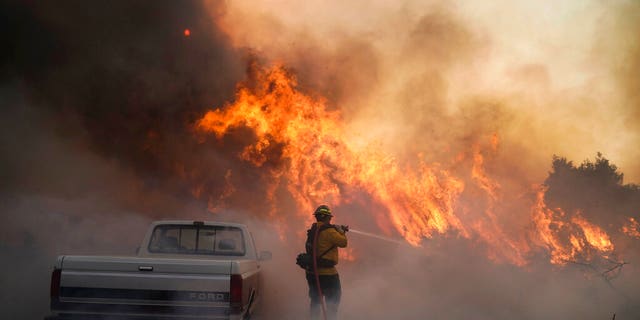 “We’re doing all we can for them,” Orange County Fire Authority Chief Brian Fennessy said, according to the paper.

Forecasts called for Santa Ana winds up to 50 to 80 mph at times over much of Southern California, with some of the strongest gusts howling through Orange County, where two blazes sped through brushy hills near major urban centers.

Southern California Edison reported to the state's Public Utilities Commission that is was investigating whether its equipment might have sparked the blaze.

GET THE FOX NEWS APP

The utility said a wire that lashed a telecommunications line to a supporting cable may have struck a 12,000-volt SCE conducting line above it.

The Associated Press contributed to this report

Anton Ferdinand on the racist scandal with Terry: I was sent a bullet in the mail. Insults in social networks came every hour
Manchester City have offered 19 million euros including bonuses for 17-year-old Argentine midfielder Sarmiento
Rehagel is a bandit from whom I will not accept an apology. The story of the worst injury in the history of the Bundesliga
Barcelona's presidential election will be held on January 24
Koke: to beat Bayern, you need to play a nearly perfect match. I hope their unbeaten streak ends tomorrow
Loew can return Muller, Boateng and Hummels to the German national team if there are a lot of injuries
Nacho about the Real Madrid game: That's not how titles are won. Working to get better
Source https://www.foxnews.com/us/2-firefighters-gravely-injured-as-wildfires-rage-in-orange-county-report

Man charged with firing shots at a Chicago police officer

I Went to the Monolith in the Utah Desert

Get $100 off Gobble, a meal delivery kit with dinners that cook in 15 minutes or less

NBA’s Steph Curry to create new brand with Under Armour

Here's a look at how the different coronavirus vaccines work

Attention side sleepers: This on-sale pillow provides the ultimate support for your neck

McConnell: There Is No Reason’ Why Congress Should Not Deliver COVID Relief Before 2021

Ryan Whitaker was murdered by the Phoenix Police for the 'crime' of answering his door.

Saban expects to return to sidelines for Alabama-LSU game

So You Traveled Over Thanksgiving. Now What?

Missing influencer Alexis Sharkey was nude when her body was found: Authorities