Three years after Ford announced it was on the way, the reborn Bronco has arrived. 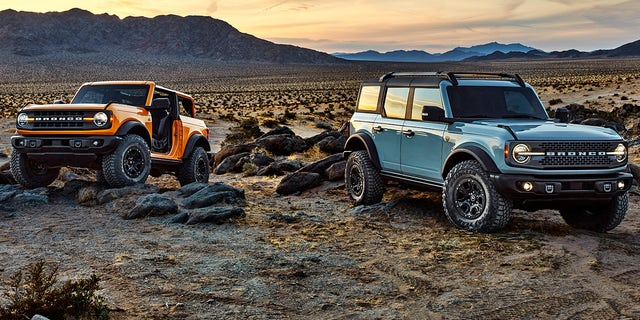 The midsize SUV unveiled Monday night was developed as a direct competitor for the Jeep Wrangler with styling inspired by the original 1966 Bronco, body-on-frame construction, standard four-wheel-drive and a removable roof and doors. A smaller Bronco Sport crossover will join it in showrooms as part of a new Bronco sub-brand of Ford. 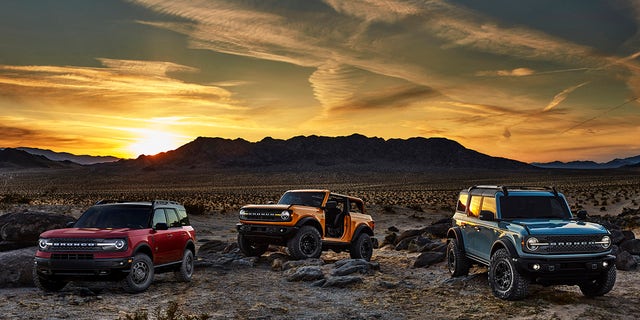 The Bronco Sport will be sold alongside the 2-door and 4-door Bronco.​​​​​ (Ford)

The 2021 Bronco will be built alongside the Ford Ranger pickup in Michigan and share its 270 hp 2.3-liter turbocharged four-cylinder. The Ford F-150’s 2.7-liter turbocharged V6 is optional and rated at 310 hp and 400 lb-ft of torque. Both engines are offered with a 10-speed automatic transmission, but the four-cylinder can also be matched to a 7-speed manual with an ultra-low “crawler” gear for extreme off-roading. 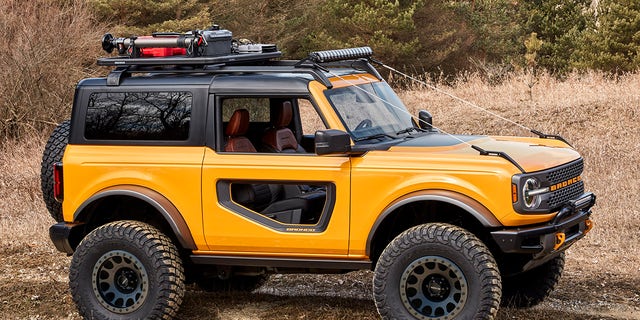 Two-door and four-door models will be available with tons of accessories across six trim and equipment levels starting at $29,995, plus a limited production top-of-the-line First Edition.

Unlike the Wrangler, the Bronco has an independent front suspension that Ford maintains is better for high-speed desert running and on-road refinement than the Wrangler’s solid axle, but can still boulder with the best of them. Two 4x4 systems with two-speed transfer cases are offered across the lineup, the upgrade version adding a full-time 4x4 setting.

Several suspension configurations are available, including a “Sasquatch” package that delivers the most off-road capability, thanks in part to its 35-inch tires and a stabilizer bar that can be disconnected when the Bronco is already at an angle and automatically reconnects as speeds increase. With this setup, the Bronco has 11.6 inches of ground clearance, can ford 33.5 inches of water and has best-in-class approach, departure and breakover angles. 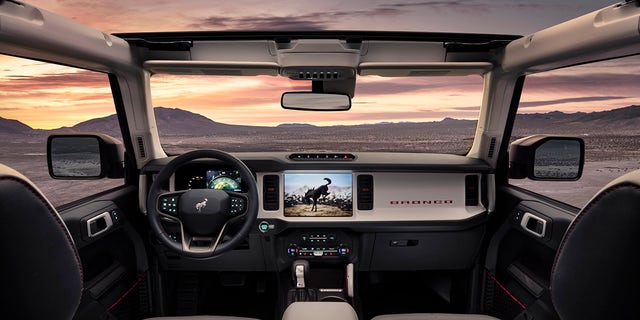 Off-road tech includes a selection of seven so-called G.O.A.T driving modes, which calibrate the drivetrain for different surfaces and play off the original Bronco’s claim to be able to Go Over All Terrain. There’s also a low-speed cruise control for rock crawling, a 4x4 turn assist that uses the inside rear brakes to help it maker sharper turns on loose surfaces and a unique one-pedal driving system that applies the brakes as you ease up on the throttle so you don’t need to use both feet to negotiate tricky terrain. 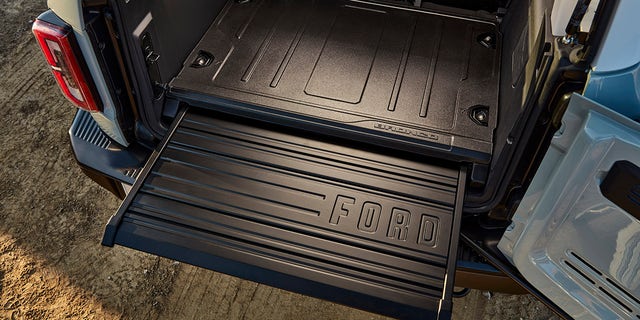 Ford designed the first Bronco in 25 years to be configurable and customizable, with parts like bumpers and fender flares engineered to be easily removable and frameless doors that are compact enough to pack into the trunk in storage bags. Two hoops on top of the fenders serve both as corner sights and tie-down points for roof-mounted cargo or limb-risers. A swing-out tailgate is complimented by a slide-out tray that can be used as a table or seat. 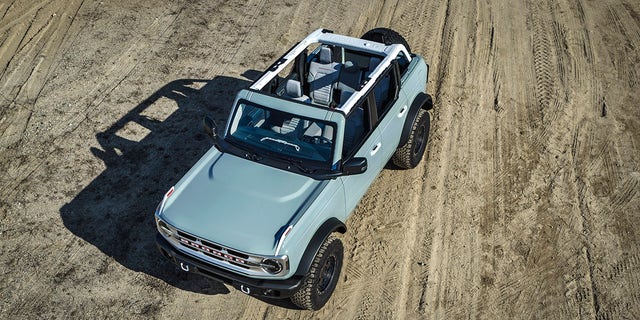 When the hard or soft top is removed, the cabin is entirely open to the sky and the elements. The Bronco doesn’t have a crossbar connecting the roof rails behind the driver’s seat, but does have waterproof switchgear, available water-resistant marine grade upholstery and rubber flooring with drain plugs. High-end models feature a 12-inch central display while the top of the dashboard has power ports and attachment points for a rack that can be used to mount mobile electronic devices and action cameras. 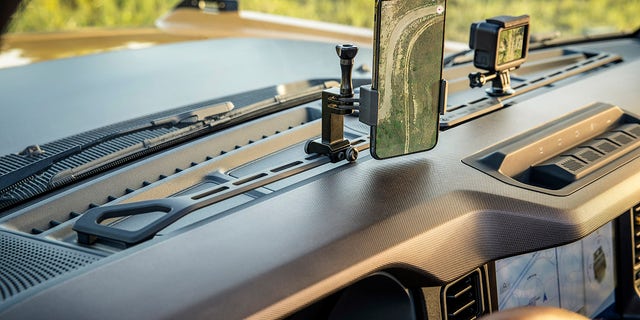 The instrument panel in the 2021 Bronco two- and four-door models is ready for installation of accessories such as a bring-your-own-device rack shown on this prototype. (Prototype interior shown not representative of production vehicle.)

A 360-degree camera system with bird’s-eye and front views is available, and Ford’s Co-Pilot360 driver suite of driver aids offers blind spot monitoring and automatic emergency braking, but not adaptive cruise control. All Broncos have over-the-air software update capability that can be used to add features and troubleshoot issues with all vehicle systems.

Ford is now accepting reservations for the Bronco with a $100 deposit and deliveries are scheduled to begin next spring.

Hans-Dieter flick: I will Understand if Tiago wants to play in the Premier League
Kike Of Setian: I didn't think that the match with Napoli could be my last in charge of Barca
Where the Champions League left off: Sarri risks being relegated from Lyon, while Real Madrid will face city
Josep Bartomeu: Messi is the best player in history. He wants to stay at Barca
Ex-Director of Valencia on the transfer of Ronaldo: in 2006, the club agreed with his agent and sponsors, but the deal did not take place
Klopp, Lampard, Rodgers and Wilder claim the award for the best coach of the Premier League, Pep-no
The authors of Showsport choose the winner of the Champions League: Chernyavsky - for Leipzig, Muiznek believes in real 🤪
Source https://www.foxnews.com/auto/2021-ford-bronco-suv-revealed?utm_source=feedburner&utm_medium=feed&utm_campaign=Feed%3A+foxnews%2Fmost-popular+%28Internal+-+Most+Popular+Content%29

A roar, an explosion, then a blank: An L.A. Times reporter's ordeal in the Beirut blast

Appeals court sides with teen who spoke out against assault

Covid-19 patients not showing symptoms may carry just as much virus as those who do, new study finds

All New York schools are cleared to reopen for in-person classes, Cuomo says

Postal Service loses $2.2B in 3 months as virus woes persist

Man arrested after threatening New Jersey Costco employee: 'Shut your mouth and ring up my stuff'

Plane skids off runway in India, some injuries reported

Detroit Tigers use infield shifts more than any team. This is why they're doing it

In the aftermath of a disaster, one group looks out for Beirut's lost and hurt pets

Strategies to Prevent Component Shortages During a Crisis

China Threatens Retaliation for US Denial of Journalist Visas

Why some people may not need 8 hours of sleep, according to a new report

Kim and Kanye reportedly in Dominican Republic working on their marriage

The loudest voices against women's suffrage were women too

This best-selling 8-in-1 skillet had a 30,000-person waitlist — and it's finally back in stock

OPINION: We Are Africans. Here's Our View Of Beyoncé's 'Black Is King'

Who is the Narrator of ‘Tiny Creatures’ on Netflix?

Penguins turn to goalie Tristan Jarry with season on line