Weather: A chance of showers with a high in the mid-80s. Saturday will be sunny, and then rain may return on Sunday.

Alternate-side parking: In effect until Saturday (Feast of the Assumption). Read about the amended regulations here. 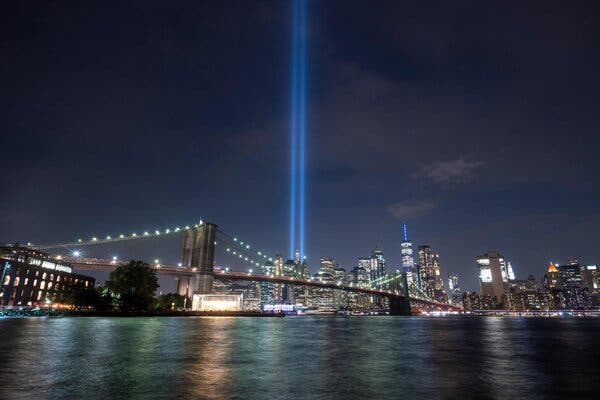 Two columns of light that rise every Sept. 11 from a site near ground zero represent who is missing. This year, those beams will be gone, too.

Since 2002, the Tribute in Light has marked the attacks on the twin towers: It features 88 specially made lights used to create the projections, which tower over New York City until dawn on Sept. 12. But on Thursday, the National September 11 Memorial & Museum, which is responsible for the tribute, announced that it was canceling the display this year because of the coronavirus crisis.

Although people typically don’t crowd together to view the lights — which on a clear night can be seen from 60 miles away — a team of about 40 stagehands and electricians work closely on the installation for more than a week, Colin Moynihan reported in The Times.

The decision to cancel was made “after concluding the health risks during the pandemic were far too great for the large crew,” Michael Frazier, a memorial and museum spokesman, said in a statement.

Teachers at a school in Queens with virtually no windows said they were worried about a lack of ventilation when their classrooms reopen in September. [Gothamist]

What we’re watching: The subway is facing its worst financial crisis in decades. The Times’s Christina Goldbaum will discuss the transit system and the pandemic’s effect on it on “The New York Times Close Up With Sam Roberts.” The show airs on Friday at 8 p.m., Saturday at 1:30 p.m. and Sunday at 12:30 p.m. [CUNY TV]

And finally: A virtual social weekend

Although most performance spaces, museums and community centers are closed, people are finding creative ways to connect through virtual events and programs. Here are suggestions for maintaining a New York social life this weekend while keeping a safe distance from other people.

‘In Plain Sight: The Mansions of Midtown’

On, the New York Adventure Club will explore over a dozen former mansions in Midtown during a virtual tour and Q. and A. The author and historian Tom Miller will share the stories behind buildings, show what they used to look like and explain how they’re being used now.

Purchase a ticket ($10) for the webinar on the event page.

Join Great Small Works on Friday at for a live cabaret that includes artists, activists and community groups. A cooking show featuring a pasta dish will kick off the free event.

On Saturday at 7 p.m., watch a free screening of “The Six Triple Eight,” a documentary about the only all-Black female battalion to serve in Europe during World War II. Participants can attend a post-screening Q. and A. with the film’s producers and the daughters of a Six Triple Eight member.

My wife and I live in a small town in Texas, and our daughter has been living in New York since she started college 10 years ago.

On one of our trips to the city to visit her, we left the East Village shop where she was working at the time, and were walking to the Astor Place subway station when a hard rain suddenly began to fall.

We huddled under an awning, and I ran into a small newsstand to buy an umbrella that I assumed would be ridiculously expensive.

The clerk could see my wife waiting outside. He asked how many umbrellas I wanted.

That was much less than I had expected.

He looked at me.

It's time to learn the names of new Borussia heroes. Now there are 17-year-old boys making goals
Paulo Fonseca: it's Important to bring Smalling back to Roma. We have only 3 Central defenders
Arteta about 2:1 with West ham: Arsenal made life difficult for themselves with losses, but they fought and believed in victory
Palace midfielder Townsend: Could have beaten Manchester United with a bigger difference. We had moments
Philippe Coutinho: I am motivated and I want to work hard to make everything work out well on the pitch
Torres on Chelsea: I Thought I could remain a top player, but I was unstable. Although there were enough successes
Neville on the broken penalty against Manchester United: an Absolute disgrace
Source https://www.nytimes.com/2020/08/14/nyregion/911-tribute-lights.html

Tigers manager Ron Gardenhire retires: ‘I have to take care of myself’

Candace Owens accuses Amazon of damaging her new book: ‘This is unacceptable’

Here's why a Supreme Court battle could benefit the Republicans

Party leaders indicate that if they win the majority, they may retaliate against Republicans by pushing to expand the court

TikTok and WeChat downloads soar ahead of ban

Why the country needs a filled Supreme Court for the 2020 election: Goodwin

Column: No fans could be advantage for Wolff in US Open

Trump Is Riding High. Can He Keep from Blowing It?

US ‘Snaps Back’ UN Sanctions on Iran

The left channels its fury toward McConnell

Hayward returns to Celtics for Game 3 of East finals

How the Supreme Court operates with only 8 justices

US says all UN sanctions on Iran restored, but world yawns

Pogacar as Stunned as Everyone After Shock Tour de France Upset

Stream It Or Skip It: ‘Gemini Man’ On Amazon Prime Video, Where Will Smith Plays A Sniper On The Run From His Younger Self

Wait or nominate? Many voters support doing what is best for their party, but for some, the court fight looms large.

'Blood amber' may be a portal into dinosaur times, but the fossils are an ethical minefield for palaeontologists

Blood amber is a portal into dinosaur times ... and an ethical minefield

Bettman: Next NHL season could start in December or January

Trump on Supreme Court nominee: 'It will be a woman'

US has reimposed UN sanctions on Iran, Pompeo says

'Fill That Seat' Chants Erupt At Trump Rally, A Day After Ginsburg's Death

'Blood amber:' A portal into dinosaur times but an ethical minefield for paleontologists

A Hong Kong teenager's death became a magnet for conspiracies, and exposed deep problems in how the city operates

Mother returns to scene of her son’s death one year later, this time with dancing and prayer: ‘This is not the end of his story’

'Nothing is off the table': Supreme Court fight could reshape the Senate

Despite their posture on Supreme Court confirmations, vulnerable GOP senators see pushing through a nominee as beneficial to their reelection

New on TV this week: 7 movies and shows to watch live