Two weeks later, all seven of them tested positive for Covid-19.

They have now quarantined themselves in two hotel rooms in Spokane Valley, where they're recovering and trying to plan their futures.

The Labor Day wildfire destroyed about 80% of Walden, about 35 miles south of Spokane, in eastern Washington state, including the fire station, post office, city hall and library, according to the Whitman County Sheriff's Office. 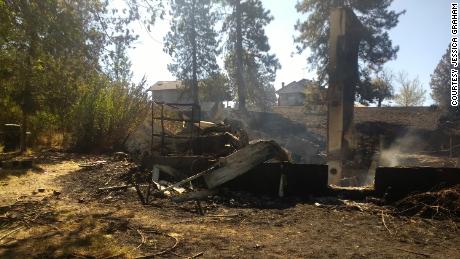 The Grahams lost their home, a barn and outbuildings where they stored things they weren't using, special baby clothes and other family mementos. Their dog was OK and their chicken coop was also spared, though some of the birds' feathers may have been singed.

"We were planning to come back that night, so we didn't pack a single thing," Jessica said.

They stayed with family after the fire and think that's how they were exposed to the coronavirus -- Jessica's dad had flu-like symptoms and Matthew's mom tested positive on September 20 after she'd babysat the children.

"We were starting to experience symptoms at that time that we were hoping was just due to hazardous air quality," Jessica said. "But then that had gone away and we were getting worse instead of better."

Neither of their parents had to be hospitalized, but Matthew's mom did have pneumonia in both lungs.

Jessica and Matthew have felt exhausted but think they're on the way to recovery.

The kids, Constantine "Costa," 12, Claudia, 10, 7-year-old twins Adele and Zoe, and 5-year-old Darius, have fared much better. Jessica said they've occasionally felt feverish but would be better the next day.

He said the community has been incredibly generous and given the family toys, board games and clothes for the whole family. A GoFundMe campaign for the family has raised more than $21,000.

Jessica said rental homes are hard to find in the area, but they hope to find a more permanent place to stay once they get out of quarantine in a few days.

She said they'd like to stay in the community and are considering buying a new house or rebuilding "this amazing new house" on their property.

"That's what keeps us optimistic," she said. "We know one of those two outcomes is going to happen and we're gonna just have something that's even better than what we had before."

La Liga President on Messi's departure: It won't be a drama for us. And his reputation will suffer
Ronaldo is a fan of the UFC. Rooting for Khabib, training with Conor, signed up for all the top fighters
Only Milan have not lost points this season in the top 5 of the European leagues. Aston Villa lost 0:3 in the
🎮 We made a game about Khabib - fight for him and try to fill up Geiji
Tebas about klasiko: the Game of the best teams in the world. The most important match of club football
Leeds forward Bamford scored a hat-trick. He has 6 goals in 6 Premier League games
Moyes on the spectators in the stadiums: People watch matches in cinemas, why can't they do it on the street?
Source https://edition.cnn.com/2020/10/01/us/coronavirus-family-lost-home-trnd/index.html?utm_source=feedburner&utm_medium=feed&utm_campaign=Feed%3A+rss%2Fcnn_latest+%28RSS%3A+CNN+-+Most+Recent%29

Another horse in Baffert’s stable draws a positive test

Antonio Brown nearing deal with Buccaneers after being out of NFL over year: report

Biden Assails Trump on Virus as the President Campaigns in Florida

Contrasting Views on the Coronavirus from Trump, Biden as Cases Resurge

Tucker Carlson: What we learned at the final presidential debate

Chileans Head to Polls Over Drafting of New Constitution

Stream It Or Skip It: ‘Bad Hair’ on Hulu, a Scary-Funny Satire in Which a Woman’s Weave Goes Wild

2 dead after US Naval aircraft crashes in residential neighborhood: Officials

The Latest: Mexico’s Chihuahua border state back in lockdown

Protesters set up ‘tent city’ outside the Department of Education, demand equity in education

Trump is playing up China's threat to the election. But Russia remains the real danger

‘RHONY’ cast spotted back at work in Greenport post-COVID scare

CNN's Van Jones: Trump 'doesn't get enough credit' for the 'good stuff he has done for the Black community'

Stream It Or Skip It: ‘Stolen Away’ On Netflix, Where A Father Gets Himself Thrown Into A Colombian Prison So He Can Find His Daughter

Who has the best mullet in America? 10 kid finalists compete for the hair-raising honor

‘This Is Us’ Creator Dan Fogelman Explains Why Season 5 Had To Premiere Before The Election As Team Talks COVID, Black Lives Matter & Kevin-Randall Rift

Kamala Harris makes her final case to 'the ATL'

Trump’s Economy Was Never So Great