A neighborhood photographer gives a voice to Latino essential workers during the pandemic: ‘We need to tell own our stories’ 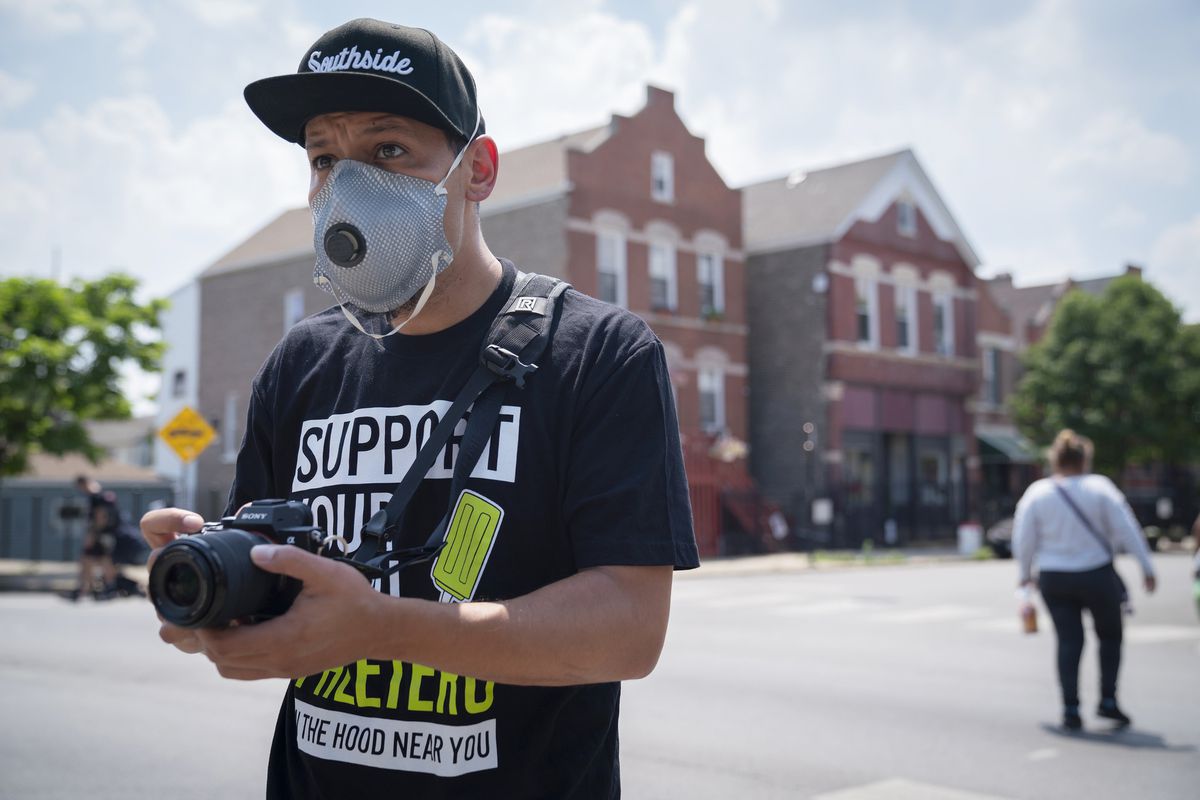 Mateo Zapata works a scene on July 7, 2020. Zapata is a neighborhood photographer who has been taking photos of essential workers during the pandemic. (E. Jason Wambsgans / Chicago Tribune)

When the pandemic hit the Chicago area, Mateo Zapata was worried. Not necessarily for himself, but for the people in his community.

He knew “that Black and brown people would be left behind.”

When the stay-at-home order was announced March 20, he immediately thought of his local street vendors, the ones he learned to love growing up.

“How are they going to survive without being able to go out and sell?” he asked himself. “What if they get sick? They don’t have the income or resources to stay home.”

For many Latinos, staying home was never an option. Some live paycheck to paycheck and many more have jobs that are considered essential. But Zapata saw a lack of focus from the government and mainstream media on Latinos’ stories, even after COVID-19 cases began to spike in majority-Latino neighborhoods throughout the country..

Zapata, a freelance photographer who lives in the Heart of Chicago neighborhood near Pilsen, wanted to make sure the lives of his neighbors and fellow Latinos become a part of history by being “genuinely” documented, allowing their voices to be elevated, he said.

So he put on his face mask and gloves, grabbed his camera and began to document “the experience of Latinos during the pandemic.”

Since quarantine started, Zapata has photographed and recorded in Pilsen and other neighborhoods on the West and South sides in Chicago.

“We need to tell our own stories to preserve its essence, its rawness and realness,” he said. “Too many times our stories get distorted because they come from an outsider’s lens, a predominantly white lens.”

There’s Don Carlos Nuñez,a man who sits outside businesses on 18th Street to play traditional ballads with his guitar. Then there’s Anthony Montana, a construction worker who stopped by La Providencia at 21st and Paulina streets to get lunch.

And among at least 30 more, there’s Juanito, the carnicero, a butcher at Carniceria Maribel, another little corner supermercado at Cermak Road and Wood Street.

“These are people that kept our neighborhoods running and that probably will never be recognized for it,” Zapata said.

“Juanito has been working full-time throughout the pandemic as your local neighborhood carnicero. (hero),” Zapata wrote in the caption of a portrait of the man standing behind the counter, wearing a white face mask and a faded red baseball cap.

The butcher’s full name is Juanito Lopez, a 26-year-old native of Guatemala. Lopez has been working at Carniceria Maribel for nearly five years and went from stocking the shelves to one of the store’s butchers, said owner Alejandro Banda.

Banda, whose grandmother opened the supermarket in 1990, says the pandemic raised a lot of quandaries for the store. And he is grateful for Lopez and the rest of the store’s employees, who “fearlessly” kept working.

“Its message is meant to keep us, Latinos, together,” Banda said. “We are responsible for taking care of our elders, our children, our essential workers, of each other, because nobody else will.”

Like other supermercados, Carniceria Maribel was deemed essential and remained open through the stay-home order — “Luckily,” Banda said.

In addition to chronicling individuals’ stories, Zapata is determined to help his beloved immigrant-owned businesses, many of which were already suffering the strains of Pilsen’s gentrification, he said.

So he created a video featuring restaurants and businesses and their workers in Pilsen, urging people to support them. It has been shared hundreds of times and viewed more than 42,000 times through his Facebook Pilsen Taco Fest page, which promotes a summer festival that Zapata curates during the summer.

Zapata also noticed government agencies and other institutions were doing what he said was “very little” to address the growing number of COVID-19 cases in Latino neighborhoods. So he produced a bilingual public service announcement to promote coronavirus safety measures, urging people to wear their masks and to continue social distancing.

The video features people from Pilsen and other neighborhoods on the Southwest and West sides.

“Our people need to hear the message coming from their own neighbors,” said Gabriel Hernandez, one of those in the video.

He and his wife have been fortunate enough to be able to work from home.

“But many of our elderly family members and friends had to go out to their factory jobs.” Hernandez said in Spanish.

Two of his older friends contracted coronavirus and died of COVID-19, Hernandez said.

“There was and still is not enough community outreach to help our immigrant population comprehend COVID-19 and all its risks, but for many, even if they understood, no hay de otra,” they have no choice but to work, he said. “They wanted to keep working because it is instilled in us,” he added.

Zapata’s video is designed to help people understand that “while they must keep working and living life, the pandemic isn’t over and we must take safety precautions to make sure we don’t lose more of our people to this virus.”

Zapata has shared his photos and videos through his social media accounts, which have gained followers in recent months. Although a few publications have used some of his photos, they’ve asked for permission, he said. But he doesn’t want to sell them.

“I just want to make sure people know what our (people are) about,” Zapata said.

“They are hardworking despite the pandemic. They are still living and smiling despite their pain and struggle,” Zapata said. “I want to utilize my skills as a photographer, as a creator to try to raise awareness on the importance of community.”

With that same mindset, he set out to photograph the Black Lives Matter protests of recent weeks. A native of Colombia, he has strong Afro-Latino and Indigenous Chilean roots and he wanted his images to help combat anti-Blackness in the Latino community and promote unity, he said.

He does not have any particular agenda and does not plan to affiliate with any organization or program.

Most of all, he wants to be known as a cultural worker, “a creative who cares about his community.”

Sanchez finished the match against Bayer, despite the injury
Solskjaer is the fifth coach with whom Manchester United reached the semi-finals of the European Cup
Manchester United are set to buy Sancho this summer despite Borussia's claim that he is staying
Shirokov beat the judge at an Amateur tournament: promised that # # # # # [vdarit] for a red card-and # # # # # [vdarit]
Brunu has scored 11 goals in 20 games for Manchester United. 7 of them were penalties
Lukaku has scored in 9 consecutive Europa League games. This is a tournament record
Konstantinos Tsimikas: Liverpool is the biggest club in the world. I supported them as a child
Source https://www.chicagotribune.com/news/ct-neighborhood-photog-documents-latino-essential-workers-covid19-20200713-no5rzcexufaibirq6nd6cifzh4-story.html#ed=rss_www.chicagotribune.com/arcio/rss/category/news/

Derecho with 100 mph winds moves across the Midwest, bringing down trees and power lines in Chicago

Kurt Luedtke Dies: Oscar-winning ‘Out Of Africa’ Screenwriter Was 80

States strain to carry out Trump order on unemployment aid

How 'The Tax Collector' topped the box office, when there's no official box office

Despite pandemic, help is still available to sexual assault survivors

Susan Rice Was a Diplomatic Disaster

How College Football Programs Are Working To Ensure There's A Season

New York City is headed for a serious decline

The 'law and order' Democrat that Biden should pick for VP

Gov. Cuomo is snubbing the victims of his fatal nursing-home orders

After 75 days, Louisville has had enough of its too-often violent protests

In a second term, Trump could build on his foreign-policy successes

Amid 40% Rise Of Coronavirus In Kids, School Return Gets Bumpy Start

Donovan Edwards may have future altered if Big Ten football is canceled: 'That's some bull'

Trump: Executive order on pre-existing conditions is 'a signal'

In CA: Roads made out of plastic bottles? Rogue cows? Just another day in the Golden State

Black teens who were victims of a knife attack had guns drawn on them by deputies, lawyer says

Virginia man who drove through BLM protest: 6 years in jail

In Netflix's 'Away,' Hilary Swank stars as an astronaut in trailer

What's on TV Tuesday: The season finale of 'DC's Stargirl'

Washington Post's Jennifer Rubin slammed over op-ed asking, 'Do we even need the Republican Party?'

2020 Daily Trail Markers: Wisconsin voters head to the polls again after "the disaster of April 7"

She is the first American to get a new face -- twice