A’s Mike Fiers Has Moved On From Astros Cheating Scandal

It wasn’t exactly the 2020 debut Mike Fiers had spent an interrupted spring training and abbreviated summer camp envisioning. When he finally got on the mound for a real game on Major League Baseball’s opening weekend, Oakland’s right-handed pitcher allowed seven hits and four runs — three of them on a mighty home run by Mike Trout. Despite his ordinary performance, the Athletics still beat the Los Angeles Angels, 6-4.

Fiers will take it.

Before the coronavirus pandemic begot a shortened, crowdless M.L.B. season, Fiers stood as one of the most polarizing figures in the modern era of America’s pastime.

Depending on your point of view, Fiers was the courageous truth-teller who exposed a cheating scheme that his former team, the Houston Astros, used en route to a now-tarnished World Series title in 2017. Or, as Phil Garner, who managed Houston from 2004-07, declared, he was a “rat” who broke the clubhouse code and brought shame to the sport. In February, Fiers told The San Francisco Chronicle he had received death threats after he detailed the cheating in an article by The Athletic.

Opinions aside, the fallout was immediate and disruptive. After an M.L.B. investigation bore out Fiers’s allegations, Houston’s manager, A.J. Hinch, and general manager, Jeff Luhnow, were suspended and then subsequently fired, and the former Astros bench coach and then-Boston manager Alex Cora also lost his job. Carlos Beltran, another ex-Astro who played on the 2017 team, was ousted from his job as Mets manager before ever coaching a game.

In the months since, Fiers has fiercely tried to avoid attention, repeatedly declining to elaborate on why he revealed the Astros had been stealing signs from opposing catchers via an illegal video feed. He also claims that Oakland’s American League West rival is — and will — remain far from his mind.

“We’re not worried about that,” Fiers, 35, told reporters before the season opened. “We’re focused on us as the A’s — there are a lot more teams than Houston.”

Still, Fiers and the A’s will face Houston on Friday for the first time since he called out the Astros out for cheating and, in essence, ensured that an asterisk would hang next to the franchise’s only World Series championship. He is not scheduled to pitch in the three-game series, but his actions are certain to be back under scrutiny as he sits across the diamond from many of his former teammates.

What originally brought Fiers’s turn in the spotlight, however, did not surprise his family, teammates or former coaches.

“He has had to overcome a lot to get where he is,” said his father, Bruce Fiers. “He wants the game to be straightaway. As good as he was doing, I’m sure he thought about the consequences, and still did what he did.” 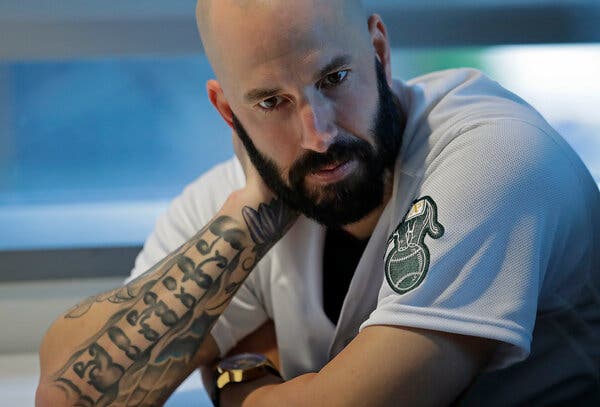 “We’re not worried about that,” Fiers said of how the fallout from the Astros’ cheating scandal would affect him and the A’s.Credit...Ben Margot/Associated Press

He had grown into a team leader since being acquired in a trade from Detroit in 2018, helping the A’s win 97 games each of the past two seasons — both times finishing second to Houston, and both times losing the Wild Card game in the postseason. All the while, he knew the division rivals had a secret, unfair advantage over opposing pitchers.

“You can obviously tell he cares about others,” said A’s outfielder Stephen Piscotty, who recognized a sense of justice in Fiers. “He was kind of frustrated to see young rookies get called up, get put in that situation and get sent down the next day. It’s just not right. I think we all applaud him for standing up for what is right. He’s a great teammate, we love him here and we’re very grateful for what he did.”

For most of his baseball career, Fiers has had to escape uncomfortable spots. As a high schooler in talent-rich South Florida, he won a lot of games but was overlooked by major league and college scouts alike.

“He was a winner, but not a dominating pitcher,” his father said. “He could never get past those guys with the radar guns. He didn’t throw hard enough.”

After graduating from Deerfield Beach High School, Fiers stayed close to home and played a season of junior-college ball at Broward College before transferring to the University of the Cumberlands in Williamsburg, Ky. In 2007, he was 7-2 for the Patriots with a 3.68 E.R.A.

In January 2008, while returning to school after winter break, Fiers fell asleep at the wheel on the Florida Turnpike, crashed into a guard rail and was launched through the windshield. He broke four vertebrae in his back and was restricted to a bed in a body cast.

“It was a miracle he lived,” Bruce Fiers said. “But he told me that he was going to play again, and nine months later he was pitching.”

“He’s a great teammate, we love him here and we’re very grateful for what he did,” Stephen Piscotty said of Fiers. Credit...Darron Cummings/Associated Press

Mike Fiers transferred to Nova Southeastern University in Fort Lauderdale, Fla., again seeking to stay close to home. The Sharks’ head coach at the time, Mike Mominey, knew him as a peripheral recruit out of high school and had kept tabs on his progress, first at Broward, then at Cumberlands. He was open to Fiers playing for Nova, but did not believe he get could get up to speed physically, and academically, in time for the following season.

“Broken backs aren’t usually recoverable,” said Mominey, now the athletic director at Nova Southeastern. “But he showed up with his transcripts and body in shape, and it was clear that he was a true leader the moment he walked on campus. Mike is the best competitor I’ve ever been around.”

He posted a 10-3 record with 145 strikeouts and 2.65 E.R.A. and led the Sharks — alongside current major leaguers J.D. Martinez of the Boston Red Sox and Miles Mikolas of the St. Louis Cardinals — to a 37-win season, a school record at the time.

“Mike was über focused on making the most of his opportunities,” Mominey said. “He always told me he was going to pitch in major leagues. A lot of people say that, he made you believe it.”

The Milwaukee Brewers drafted Fiers in the 22nd round of the 2009 draft and, after three seasons spent mostly in the minors, he went 9-10 in 22 starts during the 2012 season. But his spot in the Brewers’ rotation was short lived — he struggled in three starts the following season and was sent to Class AAA Nashville.

His mother, Linda, was gravely ill with Lupus at the time and was hospitalized in Fort Lauderdale. Linda and Bruce were divorced early, but were both devoted to Mike. So Fiers asked the Brewers to reassign him to its Class A team, Brevard County, so he could spend more time with her.

While there, he went to the hospital every day. In August 2013, Linda Korman died at 54.

After being traded to the Astros in 2015, Fiers seemed to find his confidence, as well as a place on a fast-rising team. He threw his first no-hitter in his third start as an Astro. It was his first complete game as a major leaguer. The following year, Fiers won a career high 11 games.

Fiers threw a no-hitter as an Astro in 2015. Credit...Getty Images

In 2017, Houston’s championship season, he went 8-10 in 28 starts. While he was on the Astros’ 40-man roster for their postseason run, he was not activated for any games. Whatever Fiers saw of Houston’s sign stealing scheme apparently bothered him, and after the Astros’ 2019 World Series appearance, he came forward.

“From all my experience with Mike, I’ve seen nothing but a genuine guy, nothing but a good dude ever since he came here,” said A’s third baseman Matt Chapman. “He works hard, he wants to win and he has nothing but his teammate’s best interest in mind.

“It’s not an easy thing to do, to put yourself out there like that, especially in a world where people can message you on social media and bully him and say death threats and things like that.”

Bob Melvin, the A’s manager, said he did not know what motivated Fiers to speak up, but is grateful he did. No matter how thorough the investigation by M.L.B. was, he said, it took someone speaking up on the record to pull back the curtain on the cheating in the first place.

It turns out that someone was a late-blooming but determined journeyman pitcher who has managed to post a 69-59 career record and pitch two no-hitters with a fastball that barely reaches 90 miles per hour.

“He’s a guy that’s not afraid to speak his mind,” Melvin said. “Even sometimes when I take him out of a game, it’s difficult, because he’s pretty passionate about what he does.”

Manchester United are only ready to rent Dembele
Drogba to receive UEFA President's award for outstanding achievement
Manchester United offered 80+20 million euros for Sancho. Borussia refused
The opinion of Koeman became the decisive issue for Dembele. The coach considers the Frenchman superfluous in the Barca squad
Neville on the Premier League: I bet on city, but I'm changing my mind. Just because I looked at Liverpool
Marc-Andre Ter Stegen: Barca's Goals are still the same: to fight for all the trophies
Dembele is close to a move to Manchester United. Barcelona will let him go for 50-60 million euros
Source https://www.nytimes.com/2020/08/06/sports/as-mike-fiers-astros-cheating.html

Tax protester in 2007 armed standoff to remain in prison

Biden and Harris release 2019 tax returns ahead of first debate

Omar Chaparro To Star In Motorcyle Travelogue For Streamer Pantaya

How It Feels When Software Watches You Take Tests

Amy Coney Barrett Is Not A Feminist Icon

American Airlines pilot: Thousands of us could lose our jobs this week if Congress doesn't step up

Eric Trump clarifies remarks on being ‘part of’ LGBT community

Listless Jets offense on the brink of a Jamison Crowder boost

'This Is Too Much': Working Moms Are Reaching The Breaking Point During The Pandemic

Trump vs. Biden: Five things to watch in their first debate

NYC to fine people who refuse to wear masks

We may soon learn what evidence the grand jury heard in the Breonna Taylor case. Here's what's happened over the last few days

Lawyer for Flynn says she updated Trump on status of case

Stream It Or Skip It: ‘Fandango at the Wall’ on HBO, a Documentary Capturing the Authenticity of Mexican Son Jarocho Musicians

Buried in Trump's taxes, what's going on at his golf resorts makes no sense ... unless it's a lie

How This Company Is Boosting Ecommerce Revenue by Using AI

Best Buy closed down stores in the pandemic. But people kept shopping

Jim Parsons and husband both had COVID-19

Prepare to swipe your credit card: Cardi B is officially trademarking 'WAP'

How Will Stocks React to the 2020 Presidential Debates?

Who is Chris Wallace, moderator for tonight’s 2020 presidential debate?

NYC elementary schools reopen for in-person classes, but new outbreaks could change that

FIFA Plans to Order Release of Players Over Clubs’ Objections