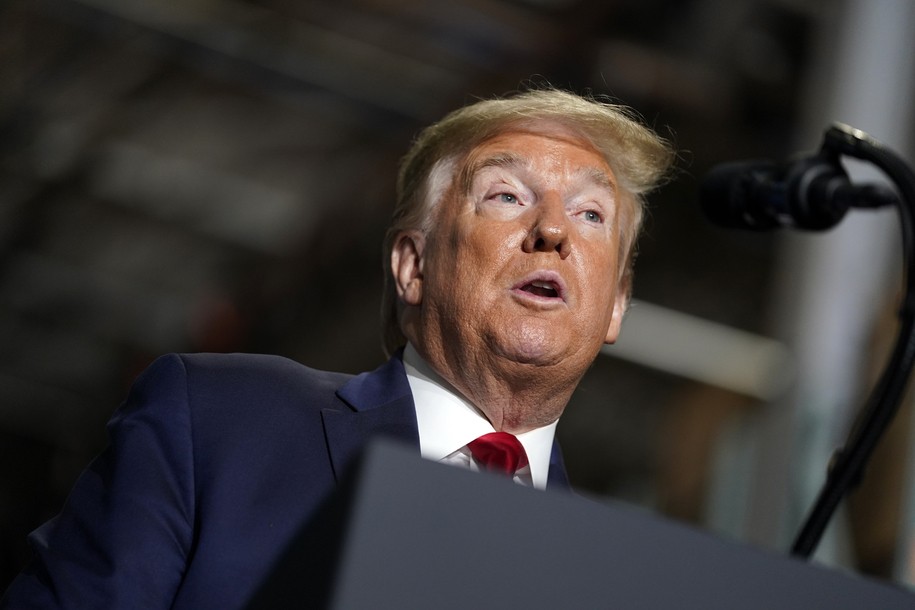 We begin today’s roundup with The New York Times and its editorial on the firing of the State Department inspector general:

It’s too soon to say for certain that President Trump’s firing of State Department Inspector General Steve A. Linick was a politically motivated effort to stop Linick from doing his job, but the administration’s record of muzzling watchdogs inspires little confidence that his removal was appropriate. [...]

But even if it were to be established that Trump wrongly dismissed Linick, the president is unlikely to alter his behavior as long as congressional Republicans (with a few honorable exceptions such as Sen. Mitt Romney of Utah) act as his apologists and enablers. The only sure remedy for Trump’s aversion to oversight is his removal by the watchdogs he should fear the most — the voters.

At The Atlantic, Quinta Jurecic and Benjamin Wittes break down the latest false Trump attack against the Obama administration:

At New York magazine, Sarah Jones argues that we’re seeing a class war come to the forefront during this pandemic:

Workers aren’t pushing back against lockdowns. They’ve organized protests of an entirely different variety. For weeks, they’ve rallied against elites, their bosses, who won’t clean their job sites or hand out enough masks and who take away hazard pay while they’re still dying. This isn’t left-wing sloganeering, but fact. Most Americans overwhelmingly back continued lockdown measures, even if they’ve lost major income during the pandemic. The polling is unambiguous. In April, Gallup reported that low-income adults were still more likely to fear illness from COVID-19 than financial hardship, which by then had already become acute. Later the same month, an IPSOS poll found that high-income households in 14 countries surveyed, including the U.S., were mostly likely on average to support economic re-opening. The poorer a household, the less likely a respondent was to agree that states should re-open.

Michelle Goldberg at The New York Times meanwhile argues that the divide between anti-safety protestors and those who are in favor of continuing stay at home measures is less about class and more about politics, given how small the support for reopening actually is:

Researchers at the University of Chicago have been tracking the impact of coronavirus on a representative sample of American households. They’ve found that when it comes to judging policies on the coronavirus, “politics is the overwhelming force dividing Americans,” and that “how households have been economically impacted by the Covid crisis so far” plays only a minimal role.

Donald Trump and his allies have polarized the response to the coronavirus, turning defiance of public health directives into a mark of right-wing identity. Because a significant chunk of Trump’s base is made up of whites without a college degree, there are naturally many such people among the lockdown protesters.

Of course, it could be both. The small sliver of anti-lockdown protestors can indeed be more privileged and more partisan people who have little regard for their own safety or the safety of others.

Our country must be able to conduct safe and fair elections, free from foreign interference and domestic intimidation. Americans must demand an end to the rampant dissemination of fake news through social media. Now, more than ever, we must fight for truth and for those speaking truth to power.

And speaking of securing our elections, John Nichols at The Nation emphasizes the need to protect the vote during a pandemic:

Democrats can act now to avert chaotic, low-turnout fall elections. Stacey Abrams, the 2018 Georgia gubernatorial candidate who now leads the voting rights group Fair Fight, says, “No. 1, we have to have vote-by-mail.” Building on existing vote-by-mail and absentee ballot rules, she says, “We simply have to scale it so that every state can execute it at the level necessary for a country in crisis, and that is doable.” Abrams proposes a “toolbox” approach, in which states make voting by mail available to all, along with safer early and in-person voting. But the time to scale it up is running out, and hard-pressed state and local governments don’t have the necessary resources. The National Vote at Home Institute calculates that 42 states would need “infrastructural changes” to make voting by mail a readily available option. “Can we expand the vote-by-mail system? Absolutely,” Amber McReynolds, the group’s CEO told BuzzFeed News in April. “But if this drags on for weeks and decisions are slow, it’s not possible.”

Bayern claims 19-year-old left back Bara from Lyon
Jovich's friend has a coronavirus. The Real Madrid forward was isolated at home
Hazard has an ankle problem and may miss the game with Alaves
Agent Fedele: Manchester City are very close to buying Coulibaly
West ham Moyes can sign Lingard and Jones from Manchester United, if not relegated from the Premier League
Ennio Morricone's heart belonged to music and rum. The composer was asked to write the club's anthem, and Totti went to his hit
Leipzig have signed forward Hwang Hee-Chan from Salzburg. He took the number 11 that Werner played under
Source https://www.dailykos.com/stories/2020/5/19/1946109/-Abbreviated-pundit-roundup-Holding-Trump-accountable

Biden defends Duckworth amid attacks on her patriotism

US: Ex-Nissan boss wired money to man who helped him flee

Kanye West Confirms He Is Done with Trump: ‘I’m Taking the Red Hat off’

5 killed, 9 injured by wildfires in Ukraine

Coppola and Henson companies get loans for winery, puppetry

We tried Banza's 3 new chickpea rice flavors, and here's what we think

California police detail chaotic arrest in shooting that led boy, 15, to hide in wilderness for 30 hours

In New Lawsuit, Breonna Taylor’s Family Argues Louisville Police Had ‘No Probable Cause’ to Raid Her Home

How to Take the Hype, Hassle, and Confusion Out of Men's Skincare Routine

Shop These School Uniform Deals Before They Sell Out

Houston coronavirus updates: What you need to know for July 8

Tucker Carlson: Kids should go back to school -- guess who is opposed to that simple idea

Israel had coronavirus firmly in its grasp, only to see it slip away

Don't expect to fly on a Boeing 737 Max anytime soon

‘Unsolved Mysteries’ tips are pouring in thanks to new Netflix reboot

How companies can make Black employees feel like they belong

Muslim woman orders coffee, Starbucks writes ISIS on the glass in US

US submits formal notice it will withdraw from WHO

Coronavirus in Illinois updates: Online Taste of Chicago starts today with food trucks, list of restaurants to order from

The once-hopeful nation that's been plunged into dystopia

Trump says ‘we are in a culture war,’ Republicans need to ‘toughen up’

Diane Keaton shows off her massive collection of hats

Christian Cooper refuses to cooperate in case against Amy Cooper

Before Mars, astronauts should swing by Venus, experts believe

This has all the makings of Quinnen Williams’ breakout Jets season

Editor & Publisher Nan A. Talese To Retire After Six-Decade Career

It’s going to get hotter, Houston

Remains of one of missing 43 Mexican college students are identified