According to data leak, Trump campaign tried to suppress Black vote in 2016

Donald Trump’s campaign is being accused of trying to deter Black voters in the 2016 election.

According to a report by British News Channel 4, the Trump campaign compiled data on over 200 million American voters into eight ‘audiences,’ for online ad targeting purposes. One group titled “Deterrence” was beside the names of 3.5 million Black voters, the citizens’ Trump did not want to vote on election day, per the report.

These groups were created to determine which ads would serve various audiences. For example, African Americans in Georgia are only 32% of the population but made up 61% of the deterrence category. Black people account for 22% of the population in North Carolina but represented 46% of the “Deterrence” group.

According to Channel 4, the leaked data is made up of more than 5,000 files and 5 terabytes—making it one of the largest leaked files in history.

But back in 2016 when PBS spoke to the Trump campaign’s digital director, Brad Parscale, he denied targeting Black people.

“No. We didn’t write any kind of suppression and/or campaigns in any way that ran to—I don’t think we actually—we didn’t run on a campaign, I believe,” Parscale told PBS. ”I would say I’m nearly 100 percent sure we did not run any campaigns that targeted even African-Americans…I would take what they do and how they consume information. The things they buy, the jobs they have, [would] be more important than the color of their skin.” 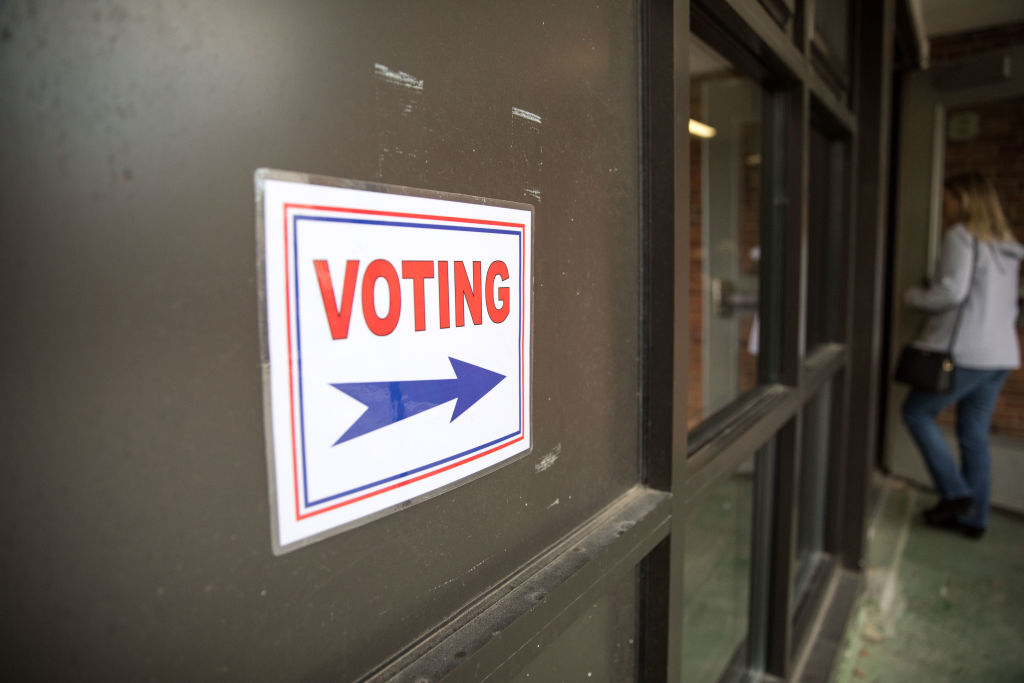 QUINCY, MA – MARCH 03: Signage outside of a polling location at Wollaston School on March 3, 2020 in Quincy, Massachusetts. 1,357 Democratic delegates are at stake as voters cast their ballots in 14 states and American Samoa on what is known as Super Tuesday. (Photo by Scott Eisen/Getty Images)

It is unclear exactly how Trump’s team used the list to deter Black voters but The Daily Beast reports that Cambridge Analytical, the former British political consulting firm pushed “dark posts” to tarnish Trump’s opponent, Hilary Clinton.  One example of this was an infamous video from 1996 when Clinton referenced Black “super-predators.” In a document viewed by Channel 4 News, Cambridge Analytical claims the Trump campaign spent $55K on these types of ads in Georgia alone.

“We use data… but it’s to motivate, persuade, and encourage folks to participate. We don’t use the data to say who can we deter and keep at home. That just seems, fundamentally, it’s a shift from the notion of democracy,” Jamal Watkins of the NAACP said once he was presented with the news of Channel 4’s findings.

Rashad Robinson, a spokesperson for the Color Of Change PAC, released a statement obtained by theGrio when news of the leaked data broke today.

“This investigation confirms what we’ve always known: Trump and his campaign are actively trying to keep Black Americans from voting. But what’s most disturbing here is not just the campaign’s clear intent to suppress Black votes; it’s the brazen steps they took to research, target, and discourage Black voters.”

Robinson continues, “We are just five weeks away from a monumental election and, while the Trump campaign looks to lure Black voters with a flimsy policy agenda, we are seeing his true colors. The findings of this investigation should be a wake-up call to Black voters. This November, we must show up at the polls in record numbers and vote for an administration that supports free and fair elections.”

Highlight of the month: the Rangers forward scored from 50 meters (the farthest goal in the history of the Europa League). Gerrard says he's never seen anything more beautiful 😍
Mourinho on 3:0 with LASK: Difficult opponent, but Tottenham played so that the victory seemed easy
Stefano Pioli: Milan is not an ordinary team. He plays with less dedication after the Derby
Barca players - report on salary cuts: We are not going to put up with the violation of our rights by the club
Milan are 21 games unbeaten in all competitions. Next game - with Roma
A year ago, a forest was planted at the rival CSKA stadium. The author paid attention to the felling of trees
Conceisau about the refereeing of the game with Manchester City: I Apologize to the Portuguese referees after what I saw here
Source https://thegrio.com/2020/09/28/trump-administration-suppressed-black-vote-over-3-million-2016/

Ivanka campaigning to bring suburban women back to President Trump

How An Aversion to Masks Stems From ‘Toxic Masculinity’

Walmart sues US in pre-emptive strike in opioid abuse battle

Google, You Can’t Buy Your Way Out of This

6 things to watch for in tonight’s debate

Obama Shares Video of Him Voting by Mail: ‘It’s Not as Tough as a Lot of Folks Think’

Quibi was supposed to be a haven for creatives. Then it shut down

In a State of Violence

That Degree You Got in Philosophy? It’s More Important Than Ever

F.T.C. Decision on Pursuing Facebook Antitrust Case Is Said to Be Near

Giants, Eagles get veteran receivers back for game

Warren on Stimulus Negotiations: ‘Democrats Have Had a Plan on the Table Since May’

Judge urges US to help find parents deported without kids

How to Watch the Final 2020 Presidential Debate

How Many Americans Will Ayn Rand Kill?

Inside the campaign to 'pizzagate' Hunter Biden

Bill Gates Says Unhappy Customers Are Good for Your Business. Here's Why.

Another Failed Drug Test Is Linked to a Bob Baffert Horse