Alex Morgan eager to get started with Tottenham Hotspur, dealing with knee issue

Alex Morgan has been off the soccer field for more than a year and fans eager to see her play with Tottenham Hotspur of the FA Women’s Super League will have to wait a bit longer.

Morgan, who joined Tottenham in September for the 2020-21 season, told Fox News on Monday that she was eager to get back out onto the field but had an issue with her knee that needed to be rectified.

“For me, it’s been over a year since I’ve played in a game so I am extremely excited to get back on the field. It feels like it’s been getting closer and closer," she said. "My knee let me down a little bit a couple of weeks ago but we’ve done a lot of rehab for it. It feels really good. I’m getting back into training with the team this week. I think in the next few weeks I’ll be in with the team on the field."

Morgan added that with the chaos of the coronavirus pandemic, it feels like it’s been way longer than about 14 months since she last played in a game.

“It just feels like it’s been five years even though it’s been a year. It feels like so long ago that we won a World Cup and we were in France and we were living pre-COVID life," she said. "So, I’m ready to get back on the field.”

Morgan welcomed her daughter, Charlie Elena, in May with pro-soccer player Servando Carrasco. She could have had a chance to play for the National Women’s Soccer League Orlando Pride when the league announced it would hold its Challenge Cup in Utah. But the Pride were removed from the tournament after a COVID outbreak.

She hasn’t appeared in a match since Aug. 21, 2019, with the Pride. Orlando retained her rights when she transferred to Tottenham.

Morgan, who recently partnered with Stella & Chewy's to advocate for senior pet adoption, said she came to play for Hotspur because at the time it was the best chance for her to play every day even with the possibility of lockdowns.

“The pandemic has majorly affected so many areas of my life. But I feel like, at this point, I only know now what I can and can’t control. So from that, I feel like that’s one reason I decided to come to England because I knew that there was … that soccer was being played here consistently week in and week out,” she told Fox News. 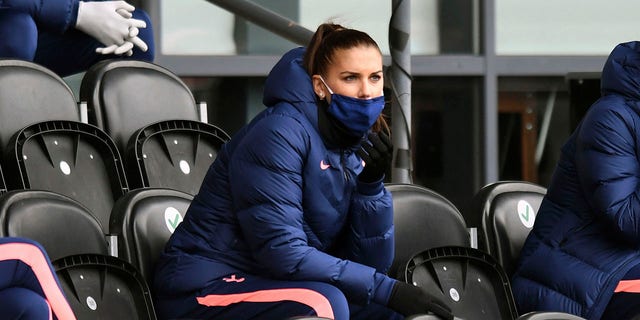 Tottenham Hotspur's Alex Morgan sit in the stands during the FA Women's Super League soccer match between Tottenham Hotspur and Manchester United, at the Hive, in London, Saturday, Oct. 10, 2020. (Kirsty O'Connor/PA via AP)

“Of course, there’s the uncertainty of future lockdowns but I knew that I wanted to get my body back fit, back feeling good so I can be ready to go next year in the Olympics that was postponed ‘til 2021," she continued. "The best way for me to do that was to come to England. It’s definitely uprooted my family. But that’s definitely the first thing that sticks out with the inconvenience of a pandemic. At the same time, it’s very small things in consideration from the other families that were affected by it, that were firsthand affected by the virus or lost someone because of it.”

Ramos and Benzema out of Real Madrid's bid for the Champions League match with Inter
Griezmann on Messi: I admire Leo, and he knows it. We have a great relationship
Rooney on the possibility of a move to Barca in the 2010/11 season: Thinking about it. Could fit in perfectly
Hooray, in England they will let the audience into the stands again! While up to 4 thousand and not everywhere, but the clubs are happy 😊
Solskjaer about the match with Istanbul: these are the Champions of Turkey, it will be difficult
Gasperini on the nomination for the best coach of the year award: If we beat Liverpool, maybe I'll get a few votes
Julian Nagelsmann: Leipzig want to give PSG that final feeling they are talking about
Source https://www.foxnews.com/sports/alex-morgan-eager-started-tottenham-hotspur-knee-issue

What Can We Do To Avoid Plastic?

Trump is leaving minority votes on the table

Virus Surge, Once Centered in Midwest, Accelerates in 45 States

Only two countries have collected rocks from the moon. For China, it's just the beginning

Ex-Police Officer Charged With Manslaughter in 2017 Killing of Suspect

The Apron Throughout History

Ex-MSNBC producer: Andrew Yang was on 'list' of 2020 Dems banned from appearing on Lawrence O'Donnell's show

Family files suit over Publix employee's death. It says company failed to protect him from Covid-19

Biden Taps Ex-Fed Chair Janet Yellen to Lead the Treasury, According to an AP Source

Analysis: Trump's effort to steal the election is done

5 takeaways from Biden's first wave of nominations and appointments

Wisconsin Lawyer For Trump Campaign Takes Action To Throw Out His Own Ballot: Report

Biden’s choice for secretary of Defense still in flux

COVID-19 vaccines were developed in record time – but are these game-changers safe?

US Airports Screen Millions of Travelers Ahead of Thanksgiving

A Sai Ta: 'It was never really about a pretty dress'

Doomscrolling On A Staycation? Here Are The OED's 'Words Of An Unprecedented Year'

Newsom suggests when mass vaccination could be available in California

What the Yellen choice means for Biden and the economy

Feinstein to step aside as top Democrat on Senate Judiciary Committee

What Donald Trump Liked About Being President