In a narrow 52-48 vote, the Senate has officially confirmed Amy Coney Barrett for appointment to the Supreme Court, a huge win for Republicans who worked quickly — and ignored past precedent — to advance her nomination.

Barrett, who will now take the seat of the late Justice Ruth Bader Ginsburg, is a staunch conservative whose vote could be the deciding one on upcoming cases involving the Affordable Care Act, abortion rights, and voting rights. Her confirmation solidifies a 6-3 conservative majority on the high court, and is likely to affect its skew for decades.

Ultimately, every Republican senator except Susan Collins (R-ME) voted in favor of Barrett’s confirmation, while no Democrats did. Collins voted against Barrett because she disagreed with the process used for her nomination, something Democrats had objected to as well. Democrats had also expressed concerns about the conservative slant of Barrett’s past writings and opinions.

Overall, Barrett’s nomination has been controversial for many reasons including its timing: In 2016, Senate Republicans refused for months to consider a Supreme Court nominee until after the general election, because they argued that the American people — through their votes — should have a voice in the decision-making process. This year, however, with less than two months to go until the election, Republicans moved to expedite Barrett’s confirmation. 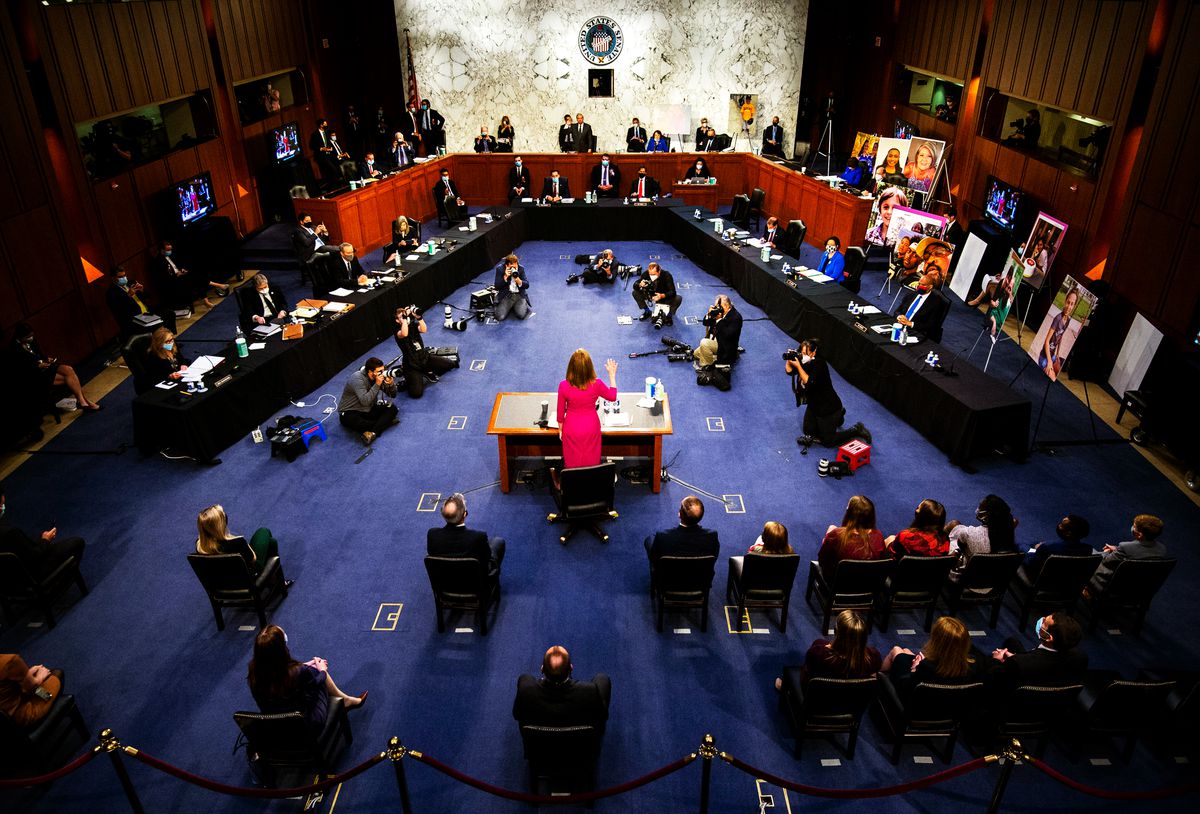 To do so, Republicans made approving Barrett’s nomination their absolute priority, even as multiple lawmakers were diagnosed with coronavirus and as stimulus talks remained at an impasse. “Nothing about this is normal,” Sen. Cory Booker (D-NJ) emphasized at the start of Barrett’s confirmation hearing. “Instead of doing anything to help people who are struggling right now, we are here.”

Just eight days before the general election, Barrett now joins the high court. Her rushed confirmation further underscores how determined Republicans are to continue their work remaking the federal judiciary — and opens the door for a comparable Democratic response should they retake the Senate majority.

With her confirmation, Barrett, 48, becomes the Supreme Court’s youngest justice and the first justice to be a mother of school-aged children.

Previously a judge on the Seventh Circuit and a longtime Notre Dame law professor, Barrett has also clerked for former Supreme Court Justice Antonin Scalia — and emphasized that her focus on originalism is similar to his. “His judicial philosophy is mine, too,” she’s said.

Barrett is also a devout Catholic, and she has written in the past about how faith relates to judicial decisions about the death penalty. She will also be among six justices on the court who subscribe to the Catholic faith.

As Vox’s Ian Millhiser has written, Barrett has the potential to roll back the Affordable Care Act, undo Roe v. Wade, and expand the interpretation of the Second Amendment as a member of the court. While she’s only been a judge for a few years, she’s critiqued the Court’s decisions to uphold the ACA in the past, and contributed to opinions that signal an openness to limiting abortion access.

Among the first cases that Barrett will consider as a Supreme Court justice is one examining whether the Affordable Care Act should be overturned: Pending any decision to recuse herself, she’ll weigh in on whether a change to the individual mandate — the tax Americans had to pay for not getting health insurance — would affect the validity of the entire law.

Much like previous judicial nominees, Barrett did not comment on how she’d rule on particular cases like this one. She has been critical of Justice John Roberts’s past opinions preserving the ACA. After the 2012 NFIB v. Sebelius decision, which preserved the ACA, she published an argument noting that Roberts’s conclusion “pushed the Affordable Care Act beyond its plausible meaning to save the statute.” There is reason to believe that she may view the current case differently, however.

There are outstanding questions about how Barrett would handle a slew of issues — including possible recusal in a case involving the upcoming election outcome, if that comes before the Supreme Court. Multiple Democrats had asked if Barrett would recuse herself from a case like this, since it could pose a conflict of interest given her recent appointment by Trump — who’d likely have a stake in the lawsuit. During her hearing, she declined to say whether she’d recuse herself, but noted that she’d take the steps needed to see if that would be appropriate. 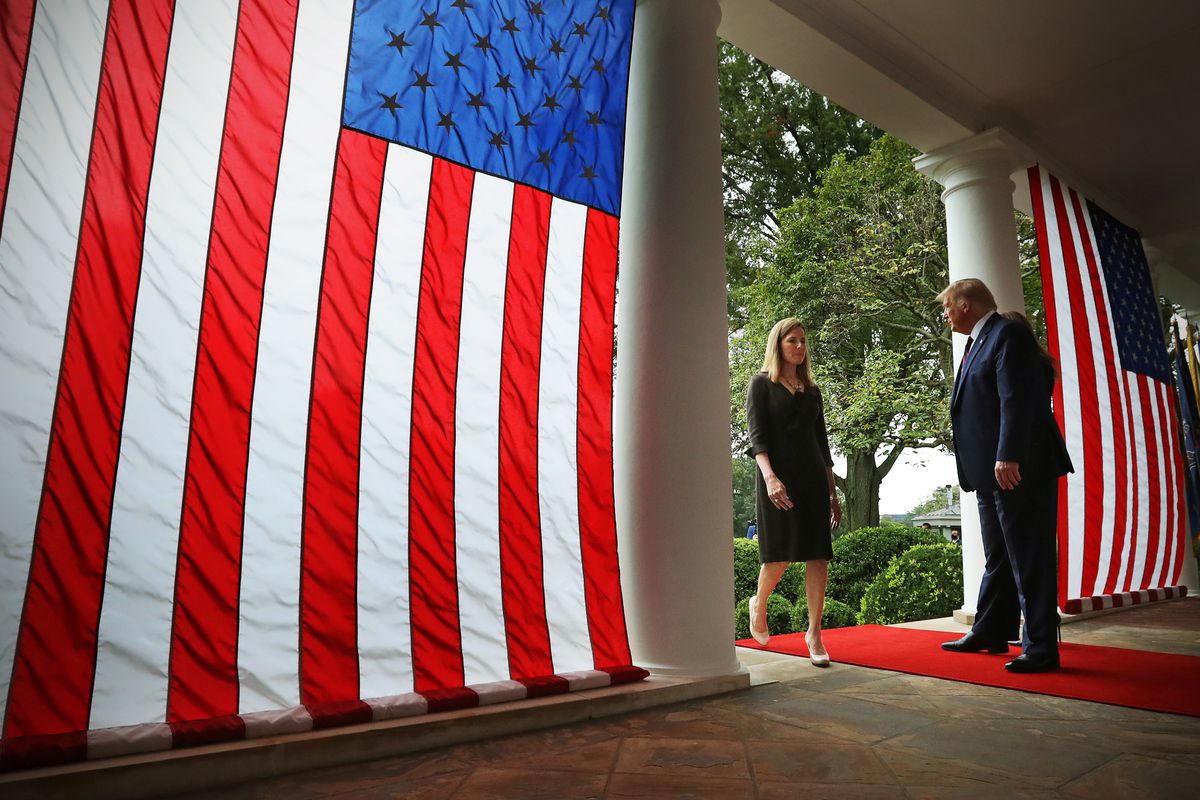 Barrett with President Trump after her nomination to the Supreme Court at the White House, on September 26.
Chip Somodevilla/Getty Images

Overall, Barrett — following in the tradition of other judicial nominees — did not offer much indication on how she’d evaluate contentious subjects. But Democrats have expressed frustration at her evasiveness in general. She dodged a number of straightforward questions, included ones asking whether she believed that climate change was real and if she felt a president had the unilateral authority to delay an election.

Members of both parties have said that they’re fired up by the Supreme Court confirmation process, and the energy it has created could have an impact on the upcoming presidential and Senate races.

And for Democrats, the rapid-fire nature of Barrett’s confirmation, specifically, stood out as problematic — particularly since McConnell even told the White House to hold off on a badly needed stimulus agreement, in part, out of concern that it would complicate the timing of Barrett’s nomination, per the New York Times.

Certain lawmakers on the Senate Judiciary Committee like Sens. Lindsey Graham (R-SC) and Kamala Harris (D-CA) have also used this opportunity to energize their respective bases as they vie for reelection and the White House, respectively.

In the long term, Democrats have signaled that Republicans’ willingness to expedite Barrett’s nomination has opened the door to similar actions on their part if they retake power. Progressive groups and lawmakers have urged Senate Democrats to consider modifying how the Court operates — or even expanding the size of the Court — if they end up winning the seats needed to do so, for example.

“Don’t think when you have established the rule of ‘because we can,’ that should the shoe be on the other foot, you will have any credibility to come to us and say: ‘Yeah, I know you can do that, but you shouldn’t,’” Sen. Sheldon Whitehouse (D-RI) said earlier this month. “Your credibility to make that argument at any time in the future will die in this room and on the Senate floor if you continue.” 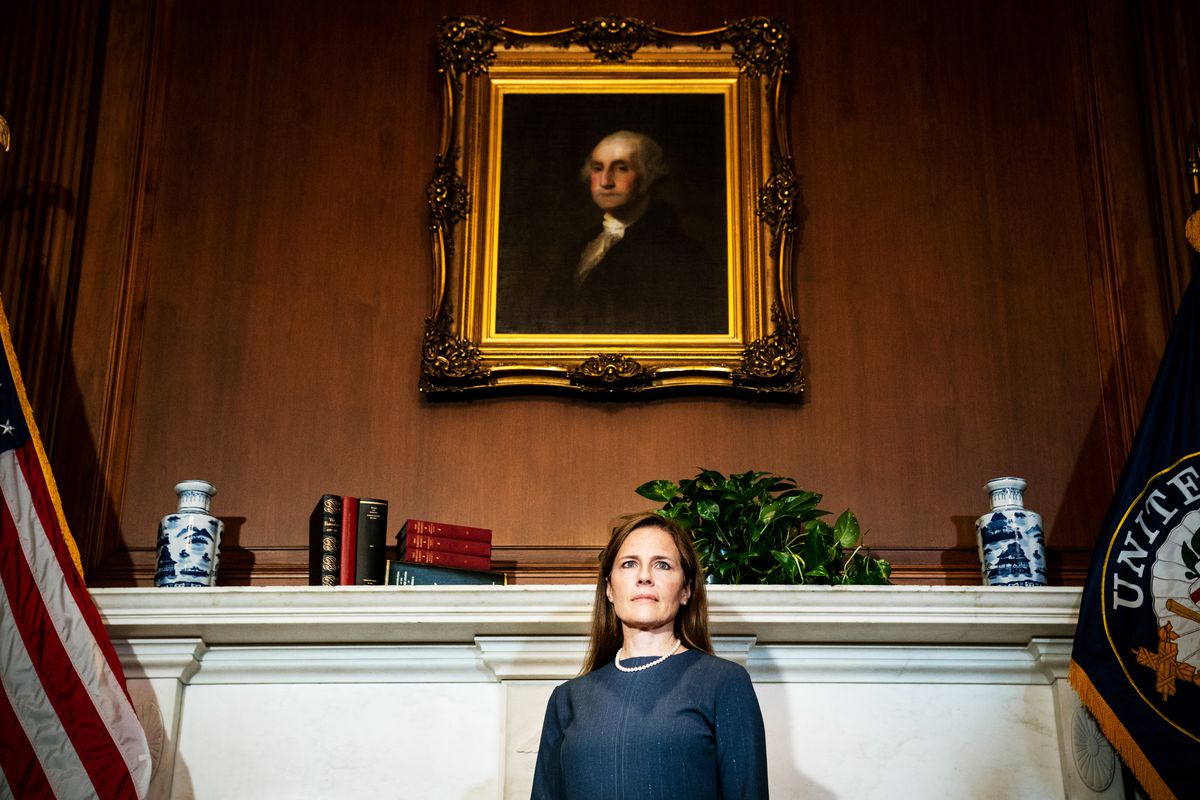 Barrett attends a meeting with Vice President Mike Pence at the US Capitol on September 29.
Erin Schaff/Getty Images

Will you help keep Vox free for all?

The United States is in the middle of one of the most consequential presidential elections of our lifetimes. It’s essential that all Americans are able to access clear, concise information on what the outcome of the election could mean for their lives, and the lives of their families and communities. That is our mission at Vox. But our distinctive brand of explanatory journalism takes resources. Even when the economy and the news advertising market recovers, your support will be a critical part of sustaining our resource-intensive work. If you have already contributed, thank you. If you haven’t, please consider helping everyone understand this presidential election: Contribute today from as little as $3.

Fati became socio of Barca, but will not be able to vote in the next election
Jose Mourinho: some Tottenham players coming to visit LASK, Ludogorets, think they don't belong there
Pioli on 4:2 with Celtic: Milan did not lose their head at 0:2 and continued to play as a team
Messi will be at PSG next year. RMC Sport journalist on Barca forward
Suarez passed a negative test for coronavirus and will return to the General group of Atletico tomorrow
Chelsea are ready to sell Ruediger and Tomori in the winter. The German was Interested in Barcelona
Çalhanoğlu for 7 years has scored 18 goals from free-kicks. Only Messi (36) has more players in the top 5 European leagues
Source https://www.vox.com/2020/10/26/21529619/amy-coney-barrett-confirmed-supreme-court

CNN Exclusive: Biden says he will ask Americans to wear masks for the first 100 days he's in office

Warner Bros. Will Release Its Films on HBO Max and in Theaters Simultaneously. The Decision May Change Moviegoing Forever

Bayless launches YouTube cooking series funding staff salaries: How Chicago restaurants are adapting to draw you back in

The Heartbeat of ‘Small Axe’

Federal watchdog: 'substantial likelihood of wrongdoing' at US Agency for Global Media

Tennessee inmate’s execution put on hold due to COVID-19

‘Let Them All Talk’ Review: Steven Soderbergh Turns a Transatlantic Cruise With Meryl Streep and Friends Into an Actors’ Joyride

New Jersey city to get rid of Facebook page over bullying, mayor says

California Is Days Away From A Regional Stay-At-Home Order

What Time Will ‘The Mandalorian’ Season 2 Episode 6 Come Out on Disney+?

‘Superstore’ to End After Season 6 on NBC

How Entrepreneurs Can Leverage Telemedicine Post-Covid-19

Masked Santa Emerges as a Holiday Hit for These Brands

Germany's largest union prepares battle against Tesla: "We can endure a long fight"

Trump shows how to get away with almost anything

Warner Bros. will stream movies on HBO Max the same day they drop in theaters

Super-Manager Wassim ‘Sal’ Slaiby on Helming the Careers of The Weeknd, Doja Cat, Brandy and More

These are the world’s most dangerous countries for 2021

Warner Bros. to Stream All 2021 Movies

No. 6 Florida can clinch SEC East title by beating Tennessee

Where the Wild Things Are

In some parts of New York, vote count shrouded in secrecy

US intelligence director says China is top threat to America

Listen, Democrats. There is a Way to Win Rural Voters

Johnson set to coach No. 3 Ohio State against Michigan State

Giants get glimmer of hope in Daniel Jones’ injury rehab

WhatsApp launches 3 new functions, what are they and how to activate them?

No. 20 Cajuns looks for measure of revenge vs. App State

Trump on trusting Barr: Ask me again 'in a number of weeks'

Weary Orange County residents face another round of wildfire evacuations

DOJ alleges Facebook discriminated against US workers in new lawsuit

Ho, ho — Whoa! Virus keeping most Santas at a distance

Dan Le Batard out at ESPN after network ‘blindsided’ him

Warner Bros. Says All 2021 Films Will be Streamed Right Away

Review: 'All My Life,' an old-fashioned love (and death) story

Liberal CNN anchor, ‘The View’ call out coronavirus hypocrisy from Democrats: 'Hell has frozen over!'

Women and BIPOC Continue to Trail in TV Representation, According to Nielsen Study

Kangaroo attacks jogger and Sarah Jessica Parker might be to blame

Ex-presidents would get vaccine publicly to boost confidence

How Elvis Presley can help us with a Covid vaccine