Barrett begins her Supreme Court tenure one week before Election Day after a rushed appointment and amid controversy from risky White House ceremonies. She faces a raft of voting-related appeals, along with a notable absence of bond-building rituals with colleagues because of Covid-19.

That complex dynamic is likely to shape Barrett's immediate image in the public eye and perhaps influence how she approaches cases and the eight other justices.

Her Senate vote of 52-48 was one of the closest in history and her benefactor, Donald Trump, is one of the most divisive presidents ever. Barrett's appointment, to succeed the late Justice Ruth Bader Ginsburg, was pushed through the Republican-controlled Senate in a mere month.

Her sheer presence on a new 6-3, conservative-liberal bench could transform the law in America for a generation, affecting abortion and religious rights, LGBTQ protections, and the scope of federal regulatory control over the environment, workplace safety and consumer protection.

And Trump made it plain that he wanted Barrett in place quickly because the high court could decide a crucial case or cases that would affect the outcome of the election between him and former vice president Joe Biden. Already, several challenges to voting rules in key states such as Pennsylvania and North Carolina are pending before the court.

"Justice Barrett made clear she will issue rulings based solely upon a faithful reading of the law and the Constitution as written not legislate from the bench," Trump said.

In turn, Barrett vowed to be fair and independent. "The oath that I have solemnly taken tonight means at its core that I will do my job without any fear or favor and that I will do so independently of both the political branches and of my own preferences,"

Beyond election disputes in upcoming days, Barrett will confront immediate cases over the future of the Affordable Care Act and 2020 census practices that would affect the allocation of congressional seats.

Guests at Monday night's investiture were required to wear masks to help protect against the coronavirus. A month earlier, as Trump first unveiled the Barrett nomination in a Rose Garden ceremony, such precautions were absent, and at least a dozen attendees were infected by the virus.

Justice Clarence Thomas, a fellow conservative, administered the constitutional oath of office to Barrett. And his appearance without Chief Justice John Roberts and the full contingent of associate justices marked a contrast from 2018 when all sitting justices attended the White House investiture for the newly confirmed Brett Kavanaugh.

The optics of appearing with a president during an election

Trump's remarks throughout the Kavanaugh investiture stoked some justices' usual resistance to participate in such White House-organized investitures. Trump began that October 2018 event by boasting of the full court's presence and then publicly apologizing "on behalf of our nation" to Kavanaugh for "terrible pain and suffering you have been forced to endure." Trump was referring to the accusations from Christine Blasey Ford that Kavanaugh had sexually assaulted her when they were both teenagers in suburban Maryland. Kavanaugh denied the accusations.

Traditionally, justices' swearings-in were held at the Supreme Court, and in recent decades the justices struggled with how to respond to presidential invitations. They are loath to be props for a president but do not want to appear to insult a new colleague. 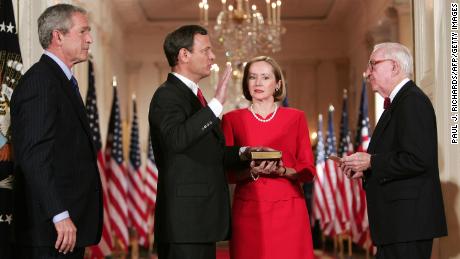 Justice John Paul Stevens, who died last year, wrote in his 2011 book, Five Chiefs, that he was particularly put off at the Ronald Reagan White House ceremony for Anthony Kennedy in 1988. "(T)he president participated with remarks that welcomed his new appointee as a judge who would follow the law rather than make it up. I thought the president's remarks were both offensive and inappropriate and therefore decided not to attend similar ceremonies at the White House in the future."

But Stevens said he overcame his unwillingness in 2005 to swear in Roberts as chief justice at the George W. Bush White House. Stevens was the senior justice at the time, and he "concluded that a refusal to participate would have been widely misinterpreted as manifesting disapproval of his appointment."

Mixing with the President and his supporters could be especially fraught on the eve of the election.

Filings in state ballot disputes have been arriving daily on the justices' doorstep, as Republicans and Democrats jockey for advantage in the November 3 election, largely over state measures related to the pandemic, for example, extending deadlines for mail-in ballots.

The cases have exposed deep fissures among the justices. Shortly before the White House investiture began, in fact, the (still) eight-member Supreme Court ruled along bitter ideological lines in a Wisconsin election case. The justices by a 5-3 vote rejected a lower court order, supported by Wisconsin Democrats, to allow mail-in ballots to be received and counted up to six days after the election.

In the majority were Roberts, Thomas, Kavanaugh and Justices Samuel Alito and Neil Gorsuch. They faulted the district court judge who extended the deadline for intervening as Roberts wrote, "in the thick of election season."

Dissenting were liberal Justices Stephen Breyer, Sonia Sotomayor and Elena Kagan. Writing for those dissenters and referring to other Supreme Court action rejecting pandemic-related measures, Kagan said, "As the COVID pandemic rages, the Court has failed to adequately protect the Nation's voters."

Still pending, and likely to be reviewed by a new Justice Barrett, are cases from other battleground states, Pennsylvania and North Carolina. Last week, the Supreme Court deadlocked 4-4 on an emergency request from Pennsylvania Republicans related to deadline extensions for mail-in ballots. As the case returns, the possibility exists that Barrett could break that tie to side with the GOP challengers.

Barrett will be able to assume her duties on cases Tuesday after Roberts administers the judicial oath, a private event scheduled to occur at the Supreme Court. (The constitutional oath, administered by Thomas on Monday, is taken by all federal officials.)

Under the text of the judicial oath, a new member of the bench promises to "administer justice without respect to persons, and do equal right to the poor and to the rich."

A court spokeswoman said on Monday that the usual courtroom ceremonies for a new appointee would occur at a future date. The building has been closed to the public since March, and most justices have been working remotely, some far from Washington.

For the newest justice, the atmosphere surrounding Covid-19 will likely mean postponement of the other rituals and personal gestures within the columned structure that usually foster relationships among the nine.

Roberts, for example, took new Justice Kagan on a private tour of the court's inner chambers in 2010. He began with the robing room, where the nameplate of Kagan's predecessor (Justice Stevens) was still on one of the nine individual wooden lockers. When they returned, Roberts had made sure her nameplate was affixed to her new locker.

The justices usually hold a "welcome" dinner for their newest member: in 1991, when Thomas joined, it was a black-tie affair, with Justice Antonin Scalia taking charge of the details; in 2006, when Alito came on, colleagues arranged an appearance by Phillie Phanatic, mascot of Alito's favorite baseball team.

Postponement of such customs may be no small thing in an institution that runs on tradition and bonds of community and that retired justice once described as having its own "language and ethic and etiquette."

Yet whatever loss Barrett may feel, her colleagues would share it. Some justices said through this spring and summer that they missed the structured routines, the handshakes before their conference sessions and the lunches together after morning oral arguments.

They have been hearing cases via teleconference. They have been also holding their private justices-only sessions, where they decide which appeals to take up and vote on cases already heard, by telephone, too.

That alone eliminates one notable role of the junior justice. By tradition, the newest associate justice is responsible for opening the conference-room door when someone knocks to deliver a requested reference book or a forgotten pair of reading glasses.

The junior justice is also responsible for taking notes of court business at these sessions. It is not known whether Barrett will be initially absolved from such note-taking duties during the telephone conferences.

She will, however, win a reprieve of one of the traditional junior-justice tasks until the pandemic subsides, membership on the cafeteria committee.

The cafeteria is closed.

Ronaldo is the best Serie A player in November. He scored 5 goals in 3 matches
PSG assess the option of signing Messi in the summer (ESPN)
Koeman on the words of the acting President of Barca about the sale of Messi: only Leo himself can make a decision about his future
Ney warmly recalls Maradona: at the age of 14, he brought the legend to an exhibition match, Diego himself offered to take a photo
Klopp responded to Neville's criticism about the words about 5 substitutions and the calendar: I'm not like him. I'm talking about all the players
The hardest task: help choose the best attacking midfielder in history
Mourinho, Lampard, Solskjaer and Moyes claim the title of best coach of November in the Premier League
Source https://edition.cnn.com/2020/10/27/politics/amy-coney-barrett-joins-supreme-court-unprecedented/index.html?utm_source=feedburner&utm_medium=feed&utm_campaign=Feed%3A+rss%2Fcnn_latest+%28RSS%3A+CNN+-+Most+Recent%29

Biden: $908 Billion Coronavirus Relief Bill Proposed Is a ‘Good Start’ but ‘Not Enough’

Cop dies after she was shot responding to parking complaint

Andy Sullivan takes 2-stroke lead into final round in Dubai

Who’s Who in ‘Mank’: A Guide to the Real-Life Players

Israel arrests man who doused inside of church with fuel

Step one in repairing U.S.-EU relations: a data privacy deal

Job growth slowed in November for a 5th straight month

Biden: Trump Attending Inauguration Is Important for the Country but ‘of No Personal Consequence’