Peter Aitken is a New York born-and-raised reporter with a focus on national and global news.

An Arizona boy showed his gratitude for the police by sharing something near and dear to him – candy.

Christian wanted to show the officers his appreciation for all the work they do keep his community safe. 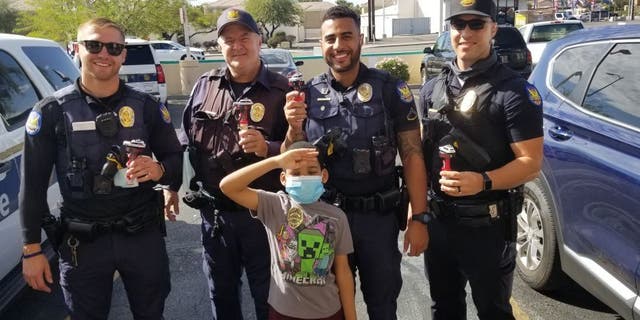 The officers posed for a photo with Christian, in which he gives a salute.

Christian bought the candy from a nearby Walgreens and gave the officers his gift while they were on duty, his grandmother told FOX 10.

Fox News reached out to the Phoenix police for a comment, which is pending.

Pirlo about 2:1 with Ferencvaros: I expected more, but it was a difficult game against a closed opponent
Napoli has not paid salaries since July. The club plans to pay off its debts in December (RAI)
Schalke terminated the contract with Ibisevic and suspended Bentaleb and Harit
Bielsa, flick, Klopp, Lopetegui and Zidane are the contenders for the best coach of the year award
Messi, Ronaldo, Lewandowski, Ramos, de Bruyne and 4 Liverpool players are among the contenders for the best
Zlatan about getting the Swedish Golden ball: I Plan to win it in 50 years
Anton Ferdinand was racially abused in comments to a post about a documentary about racism and Terry
Source https://www.foxnews.com/us/arizona-boy-shares-candy-with-police-officers-as-show-of-appreciation?utm_source=feedburner&utm_medium=feed&utm_campaign=Feed%3A+foxnews%2Fnational+%28Internal+-+US+Latest+-+Text%29

Asian American unemployment is surging during the pandemic

The 9 most gorgeous dishes to serve on Thanksgiving, according to designers

With just 7 COVID-19 deaths in Taiwan, even huge events are back in business

Praise from your boss can actually hold you back. Here’s how to make sure it doesn’t

The Bachelorette's Tayshia and Ivan Just Had the Best, Realest Date Ever