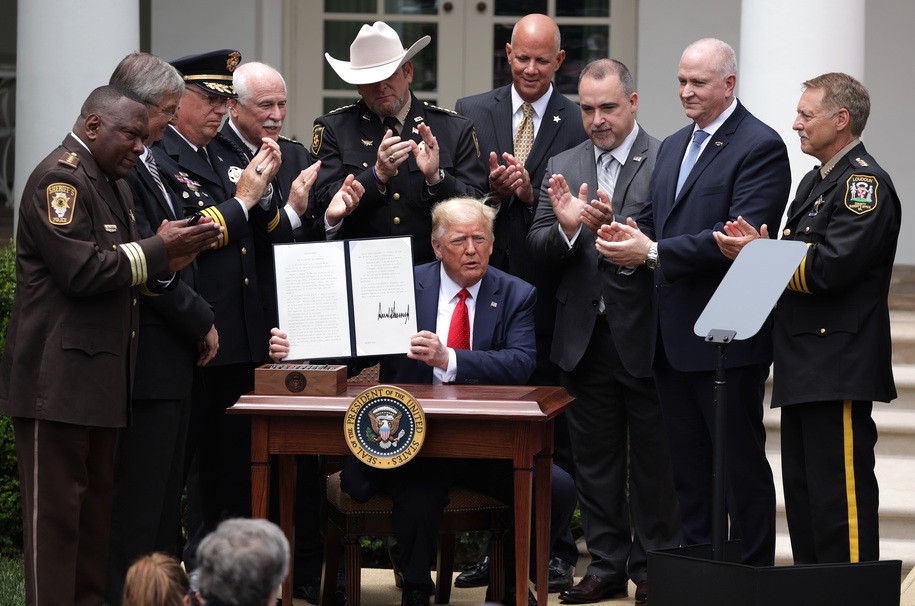 On Wednesday, Texas Republican Gov. Greg Abbott made it clear that he wasn’t going to allow state and county officials to require people to wear masks, despite indications that this one behavior can reduce the transmission of COVID-19 by as much as 85%. At the same time, Abbott explained how the record 4,400 cases logged that day wasn’t really so bad, because 1,500 of those cases were just people in prison or long-term care, that no one had bothered to count so far. So Abbott should have a good time on Thursday, explaining how the 3,500 new cases in the latest update are also nothing to worry about.

Meanwhile in Arizona, Republican Gov. Doug Ducey, after weeks of refusing to allow local ordinances on masks, has flipped his position. After another 1,800 cases on Wednesday, and repeated warnings that both ICU beds and hospitals in general are dangerously close to full, Ducey acquiesced and will let local governments determine their own regulations on mask-wearing. Special note: Donald Trump has said he’s coming to Arizona next Tuesday to speak at a “Students for Trump” rally. That rally is to be held in Phoenix, so masks will almost certainly be required. On the other hand, as a rally angled toward young people supporting Trump … they may not need that many. Meanwhile, an Arizona sheriff who refused to enforce COVID-19 regulations, has taken his case straight to the White House—his case of COVID-19.

Also on Tuesday, Mike Pence dropped an editorial in The Wall Street Journal that said there was no increase in COVID-19 cases. Instead, Pence insisted that the curve have been flattened, that cases were dropping, and that there was no sign of a “second wave.” Not only did Pence’s statements contradict the most basic numbers available from multiple public sources, as Yahoo News reports, they’re also completely counter to a document that was produced by the CDC on the same day as Pence’s upbeat editorial.

While Pence insisted that, “Cases have stabilized over the past two weeks, with the daily average case rate across the U.S. dropping to 20,000—down from 30,000 in April and 25,000 in May,” the number of new cases on the day Pence’s piece was published was 25,450. The next day, it was over 26,000. There actually was a point two weeks back where the number of cases appeared to be declining as the extreme outbreak in New York City and surrounding areas was brought under much better control. But those declining numbers have been reversed as new cases rise in many states—particularly those focused on “reopening” regardless of circumstances.

The CDC document, which circulated among government agencies and certainly should have been visible to the supposed head of the all-but-disbanded Coronavirus Task Force, showed an increase in new COVID-19 cases of 18.3% in just three days. As with Abbott’s explanation in Texas, CDC Director Robert Redfield stated that a portion of the increase came from testing at prisons, nursing homes, and meat processing plants, and just like in Texas, that raises the question of why the hell weren’t these people being tested before. However, Redfield also made it clear that increased testing in these vulnerable populations didn’t explain the size of the increase.

Finally, while Trump is planning to head for Arizona soon, a little bit of Arizona already tried to come to him. As The Washington Post reports, Pinal County Sheriff Mark Lamb became a right-wing favorite when he refused to enforce stay-at-home orders or other COVID-19 regulations, calling them “unconstitutional.” Like all the best Republican sheriffs, Lamb knew who he was really there to protect and serve, saying “Three hundred deaths is not a significant enough number to continue to ruin the economy.”

Naturally, with a record like that, this sterling example of law enforcement was chosen by Trump to attend the signing of his executive order on policing. Only, before Lamb could make that visit he had to get a COVID-19 test, and he tested positive.

To make the story even more ridiculous, Lamb speculated that he had become infected on Saturday … at a campaign event. Video of that event shows Lamb, “hugging, shaking hands” and generally laughing it up with supporters, none of who appears to be wearing a mask or following social distancing guidelines.

And to reach ridiculous squared, there’s this: Lamb is running unopposed, after he managed to get his only opponent removed from the ballot through a court challenge. So why was the unopposed Lamb having a big, sweaty, virus-exchange party? Well, as a Republican icon, he has campaign merchandise to sell. That merchandise includes T-shirts emblazoned with “God, Guns, and Freedom” as well as one that features a cartoon of Lamb pointing a smoking gun above the words “American sheriff.”

Again … this is the guy Trump invited to the signing of his executive order on policing. Which tells you everything you need to know about Trump. And Lamb.

Rivaldo on Griezmann: I Don't understand why the world champion and multi-million dollar transfer only comes out at the last minute
The Doctor Sociedad: The Youngster from serious injury. We are not currently considering the option of surgery
Klopp made Liverpool Champions. Now it's your turn: the game Showsport
Daughter of the owner of Valencia: This is our club and we can do whatever we want with it. Don't the fans understand?
Manchester City and Chelsea are Interested in Dean
10 years of Suarez's great save: hand saved Uruguay at the 2010 world Cup
Sane signed a contract with Bayern until 2025 (Fabrizio Romano)
Source https://www.dailykos.com/stories/2020/6/18/1954046/-Arizona-sheriff-invited-to-White-House-after-refusing-to-enforce-lockdown-tests-positive-for-COVID

Breonna Taylor was killed by police in March. The officers involved have not been arrested.

Herman Cain is receiving treatment for coronavirus at an Atlanta hospital

More companies are making masks to battle the summer ‘sweat factor,’ but do they work? Here’s what you need to know.

From big cities to backyards, July 4 not usual blowout bash

Thirstory: Diana Ross Is the Boss

Another Day, Another Coronavirus Record In Florida

Donna Brazile on Confederate monuments: America must 'transcend' bitter past to walk into 'brighter future'

French Open to allow fans in stands for event, masks required for moving around at venue

On Buddhism and Blackness

Fact check: In jobs speech, Trump does more dishonest downplaying of the pandemic

'Beyond horrible': Tiny desert town devastated by wildfire as it battles the coronavirus

Trump says Biden as president could lead to next Great Depression

Joy Behar mocks Americans for thinking they're 'independent': 'We are a complete nation of sheep'

What ‘Succession’s Rebel Son Jeremy Strong Learned From Working With Daniel Day-Lewis, And How Kendall Roy Finally Became A Killer

'Catastrophic' elephant deaths mystery: Hundreds have dropped dead in Botswana, and no one knows why

The summer's best novel about the bankrupt American Dream

Viewpoint: A demand for accountability and change

Dr. Fauci warns of ‘greater outbreak ahead’ for coronavirus in US

Stream It Or Skip It: ‘Under the Riccione Sun’ on Netflix, an Italian Rom-Com About Empty, Attractive Young People at the Beach

‘The Kominsky Method’ Renewed For Third & Final Season At Netflix

Aastha Gill says lockdown will change the tastes of people

Lebanese major retailers to shut down amid economic crisis

SAG Awards Postponed Until March 2021 Due To Coronavirus Pandemic

Another California city starts issuing fines for not wearing a mask

Coronavirus cases are rising in 40 of 50 US states

‘Phineas and Ferb The Movie: Candace Against the Universe’ Coming to Disney+ in August

It's a scary time to be unemployed. These people still chose to get laid off

US tries to seize Iranian gas heading toward Venezuela

Balloon trips to the edge of space by 2021

COVID-19 spike in Ohio due to people not wearing masks, expert says